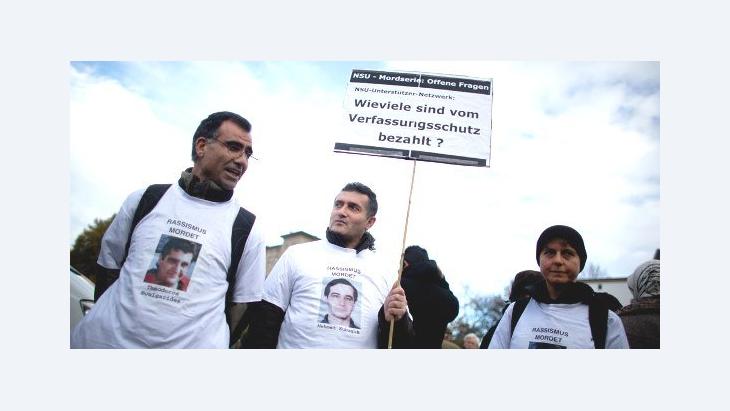 One Year after the Uncovering of the Neo-Nazi Murders

When No One Takes a Stand for Decency

﻿The right-wing terrorist cell NSU succeeded in shaking people's faith in the government and giving many immigrants in Germany the feeling that they are not safe in this country. And the authorities have still not managed to credibly stem this loss of confidence. A commentary by Tanjev Schultz

One year ago, the right-wing extremist National Socialist Underground, NSU, terror cell was uncovered, and the public horror at its deeds and the failure of the German state to put a stop to them has hardly diminished since then. On the contrary, it continues to grow with every new detail that comes to light bearing witness to the blinkered behaviour of the authorities. The officials were completely off-track for years. But even worse is that they still are today in part. The old failings are being exacerbated by a new one: a lack of humility and of an earnest will to clear up the case.

It's not only the arrogant police chiefs and tight-lipped intelligence agents who insist they did everything right. There's also an Interior Minister who seems not to have a plan and who allowed, even months after the NSU's cover was blown, for key files about the neo-Nazi group to end up in the shredder.

Many citizens, particularly immigrants, have lost all faith in the German state, and who can blame them? Fadime Simsek, niece of one of the ten victims murdered at the hands of the NSU, was asked in an interview by the German national daily taz whether Turks were worth less in this country than other people: "That's how it would appear," was her reply. 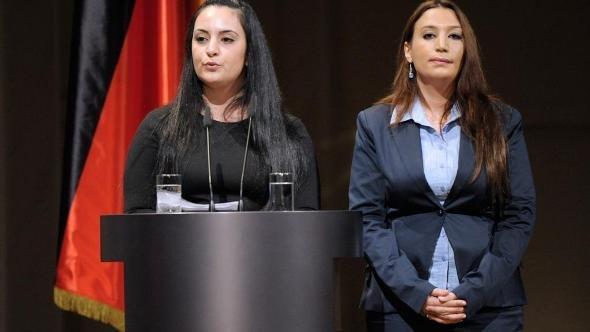 Are Turks worth less in Germany than other people? Many citizens, particularly immigrants, have lost all faith in the German state. Pictured: Semiya Simsek (r.) and Gamze Kubasik at the memorial ceremony on 23 Feb. 2012 in Berlin

If this impression arises, and if it is allowed to spread further, the domestic peace of the country will be undermined in terrible ways – which is unfortunately just what the right-wing terrorists intended.

People at first shook their heads in view of a terrorist group that, in all its years of planting bombs and killing immigrants, never left behind a letter claiming responsibility, seemingly waiting instead until the group itself was doomed. Whether things were calculated to end that way or not: the denouement only struck the public with all the more force.

The devastating effects of terrorism go beyond the cold-blooded executions; terror eats its way into the minds of the citizens. The NSU succeeded in shaking people's faith in the government and giving many immigrants the feeling that they are not safe in this country. The authorities have still not managed to credibly stem this loss of confidence.

An Interior Minister unable to strike the right note

Interior Minister Hans-Peter Friedrich (CSU) is partially responsible for this situation. Since the beginning of his term in office, he has rarely hit the right note. He prefers to incite a debate on alleged abuse of asylum instead of addressing the lack of sensitivity, perhaps even the latent racism, to be found amongst the security authorities. 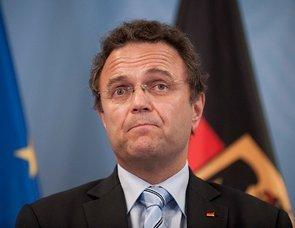 Opting for populism: Interior Minister Friedrich (CSU) preferred to incite a debate on alleged abuse of asylum instead of addressing the lack of sensitivity, perhaps even the latent racism, to be found amongst the security authorities, Schultz writes

At the beginning of the year, a worthy memorial ceremony was held for the victims of the neo-Nazis, and Germany's chancellor Angela Merkel called the NSU murders a "disgrace for our nation". She said that all those years during which relatives of the victims were themselves put under suspicion were like a never-ending nightmare for them. The sad truth is: the nightmare is not over yet.

Family members of the victims feel sympathy for the meritorious intelligence efforts of the investigation committees. And they are thus privy to how the police even called in a psychic for help with the murder investigations – while it never occurred to any of the security officers to search for underground neo-Nazis.

And what are the relatives of the victims to make of a German police force that employs persons associated with the Ku Klux Klan? Or of a State where the intelligence agency, the Federal Office for the Protection of the Constitution, harbours a deep mistrust of the police, and vice versa?

One can well understand the attempts by capable civil servants to defend themselves from being stamped indiscriminately as losers or even as racists. But they, more than anyone, must have a stake in ensuring that things don't go on as they have thus far in the police force and intelligence services. When are the reputable security officials going to stand up for justice?

Michael Frey has written a fascinating book about the contemporary political thinker Nassif Nassar. Since 1967, Nassar has devoted his life’s work to the question of a fair social ... END_OF_DOCUMENT_TOKEN_TO_BE_REPLACED

The Kurdish YPG militia did the heavy lifting in the fight against the "Islamic State", yet many foreign YPG adherents, including Germans, have come home to find themselves under ... END_OF_DOCUMENT_TOKEN_TO_BE_REPLACED

Few Muslims have to date visited the Auschwitz-Birkenau concentration camp memorial site. Now high-ranking representatives of Muslims and Jews are travelling together to the place ... END_OF_DOCUMENT_TOKEN_TO_BE_REPLACED

The terror attacks in Paris, Brussels and Berlin were all carried out by men radicalised in jail. In Germany, politics and the judiciary are trying out new approaches to prevent ... END_OF_DOCUMENT_TOKEN_TO_BE_REPLACED

Elke Muller is fighting for her daughter Anna, who fell in love with a young Afghan and converted to Islam. The mother spoke to Esther Felden about feeling alienated and her fear ... END_OF_DOCUMENT_TOKEN_TO_BE_REPLACED
Author:
Tanjev Schultz
Date:
Mail:
Send via mail