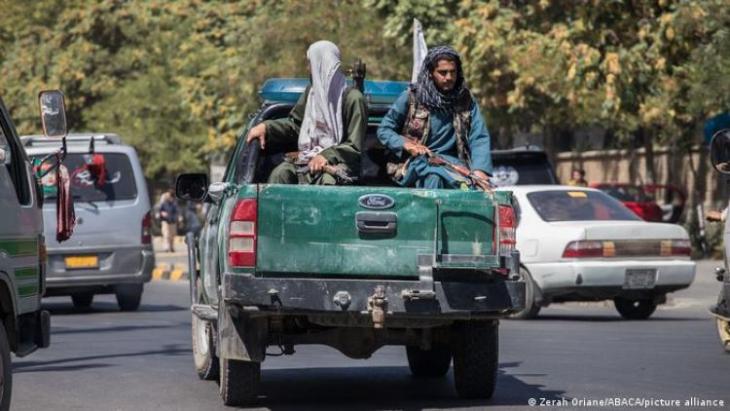 One year of Taliban rule
How life has changed for Afghans

On 15 August 2021 the Taliban overthrew the government in Afghanistan and seized power. One year later, the country is facing multiple challenges that demand immediate global attention. Ahmad Hakimi reports

The Taliban took the world by surprise when they captured Kabul on 15 August last year, experiencing little or no resistance from former President Ashraf Ghani's forces. The Islamic fundamentalist group finally managed to return to power after the U.S. overthrew their regime in a 2001 military invasion.

Experts say the downfall of Ghani's government was inevitable once NATO forces started withdrawing from the war-ravaged country in May 2021 as a result of Washington's deal with the Taliban in February 2020. But few expected the country to fall to the militants so quickly.

Apart from the geopolitical impact of the Taliban's return to power, life for ordinary Afghans has changed drastically since last year — mostly for the worse.

Despite criticism of the U.S.-backed governments in Afghanistan after the Taliban's ousting in 2001, Afghanistan had made progress on several fronts in the last two decades.

Independent media had flourished under former presidents Hamid Karzai and Ashraf Ghani, human rights had seen a substantial improvement, an increased number of girls had started going to school and universities, and Afghanistan's middle class had experienced relative prosperity during the same period.

Over the past twelve months, these achievements have been largely reversed. 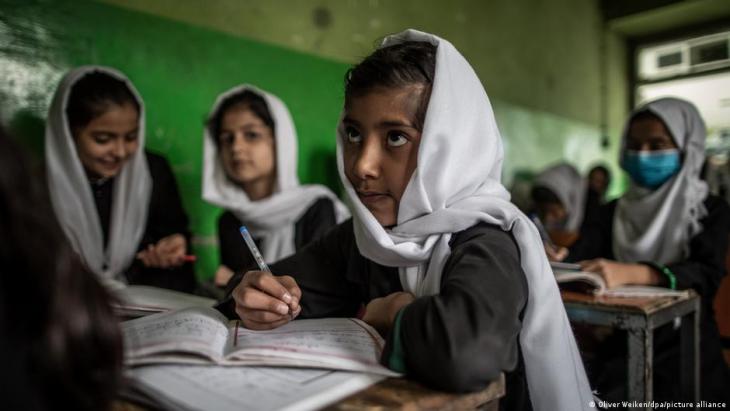 Betrayal of the Afghan people: under former presidents Hamid Karzai and Ashraf Ghani independent media had flourished, human rights seen a substantial improvement and an increased number of girls had begun attending school and university. Over the past twelve months, these achievements have been largely reversed. The Taliban have not stood by their promises made in Doha in 2020. They have been reluctant to form an inclusive government in the country, while girls above grade 6 are not allowed to go to school

The Taliban have not fulfilled most of their promises under the 2020 Doha agreement. They have been reluctant to form an inclusive government in the country, while girls above grade 6 are not allowed to go to school. Also, women are not permitted to work in most sectors and they can only visit public parks on specific days.

Afghanistan's economy is now in freefall, with the UN warning of a humanitarian catastrophe unfolding in the country.

International recognition is crucial for the Taliban to avoid potential economic collapse. Millions of Afghans are jobless and their bank accounts are frozen. Many people are selling their possessions to buy food, with urban communities facing food insecurity on levels similar to rural areas for the first time.

In January, the United Nations made the "biggest-ever appeal" for humanitarian aid for a single country, saying it needed €3.9 billion for Afghanistan to prevent the "world's most rapidly growing humanitarian crisis" from deteriorating further.

But the international community has been reluctant to hand over the funds directly to the Taliban, fearing they would use the money to buy weapons. For the same reason, Washington has refused to unfreeze Afghanistan's bank assets.

According to the UN, Afghanistan is the only country in the world where girls are not allowed to attend high school.

A large number of women working in different positions in previous administrations – from the ministerial level to office clerks – were sent home by the Taliban in the first months of their rule. 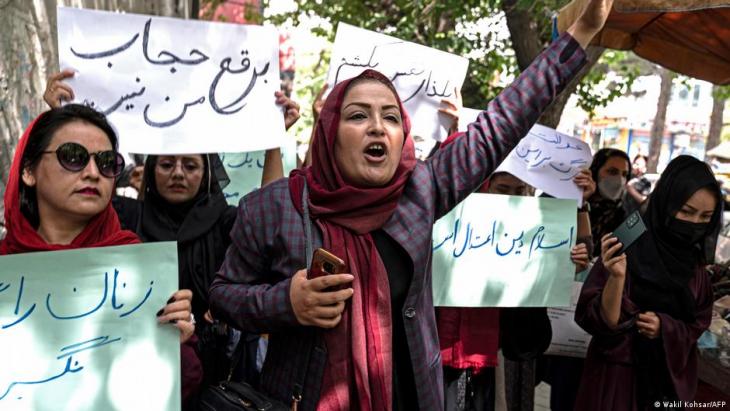 Afghan women remain defiant: Some use social media to protest against the Taliban's crackdown, arbitrary arrests, enforced disappearances, not to mention physical and psychological torture. "One of my daughters should have been studying at university, while another should have been in grade 11. When I look at their psychological state, I have no choice but to protest. Until I get back our rights, I will not be silenced," says Zholia Parsi, a women's rights advocate

Many Afghan women took to the streets to protest the Taliban's oppressive decisions. The hardline group used force to crush the protests, arresting many women's rights activists.

"Less than one year after the Taliban's takeover of Afghanistan, their draconian policies are depriving millions of women and girls of their right to lead safe, free, and fulfilling lives," Agnes Callamard, the secretary-general of Amnesty International, a global human rights watchdog, said in July.

Despite pressure from the Islamist rulers, many Afghan women are still trying to make their voices heard. Several women protesters have left the country, but at least five women's rights groups are still active there.

Some of them are raising their voice on social media against the Taliban's crackdown, arbitrary arrests, enforced disappearances, not to mention physical and psychological torture. Zholia Parsi, a women's rights advocate, said she chose to continue her protest to safeguard her children's future.

"One of my daughters should have been studying at university, while another should have been in grade 11. When I look at their psychological state, I have no choice but to protest. Until I get back our rights, I will not be silenced," she said.

Independent media is seen as an enemy by the Taliban. The sector progressed in leaps and bounds between 2001 and 2020, but now thousands of Afghan journalists are either in exile or have lost their jobs. 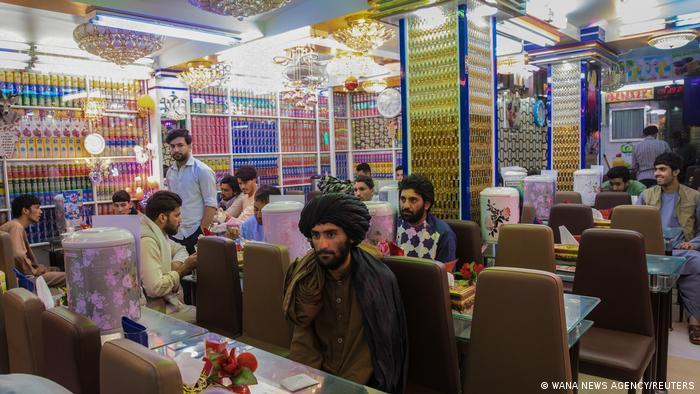 It's a man's world: photos and videos emerging from Afghanistan show bustling activity returning to the streets of cities – as at this restaurant in Herat, where customers are being welcomed back. But there is one conspicuous difference from before: at the tables are men and men alone, often wearing the traditional knee-long tunic. Women have become a rarity in the urban landscape 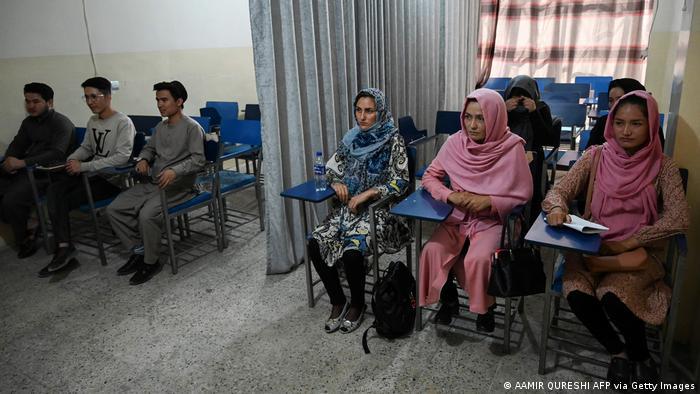 Keep them apart: a curtain divides these students at a private university in Kabul. Gender separation is now the official policy here – and that is likely to spread. "Co-education contradicts the principles of Islam as well as national values, customs and traditions,” said Abdul Baghi Hakkani, the incoming minister for higher education, in Kabul 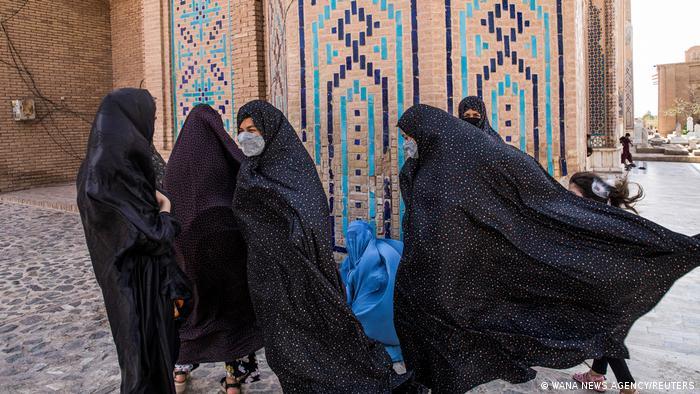 Lost freedoms: like for these women, on their way to a mosque in Herat — after 20 years of allied forces holding the Taliban at bay, freedoms won by women have been quickly erased. Even sports will be off-limits for female players, said Ahmadullah Wasik, deputy head of the Taliban's Cultural Commission 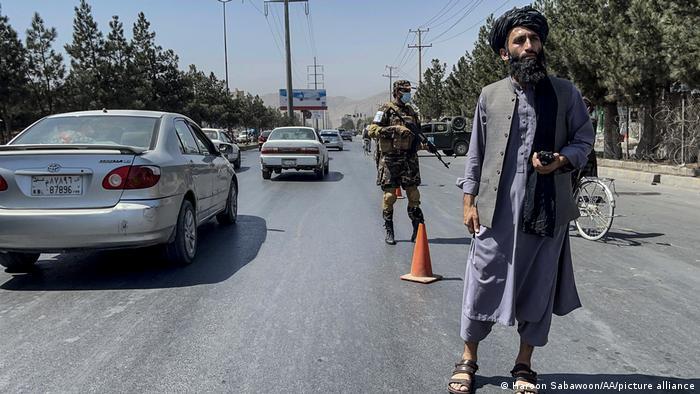 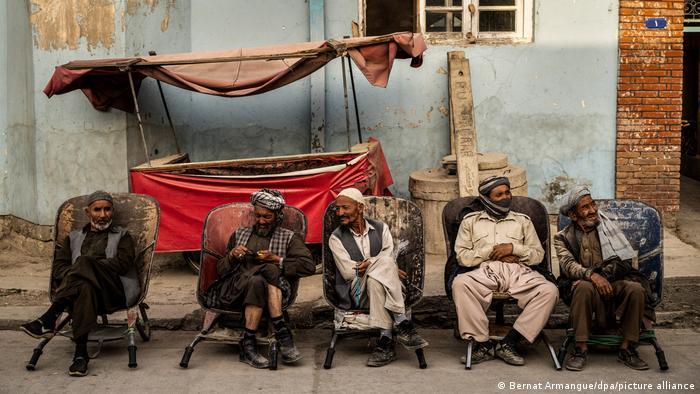 Waiting for work: male day labourers sit at the roadside in Kabul, awaiting a job offer. Afghanistan, already in a precarious economic situation before the Taliban takeover, is now teetering on economic collapse, with unemployment ballooning. The United Nations has said that "universal poverty" threatens to overtake the country within a year. That would be a poverty rate of around 98%, compared to 72% currently 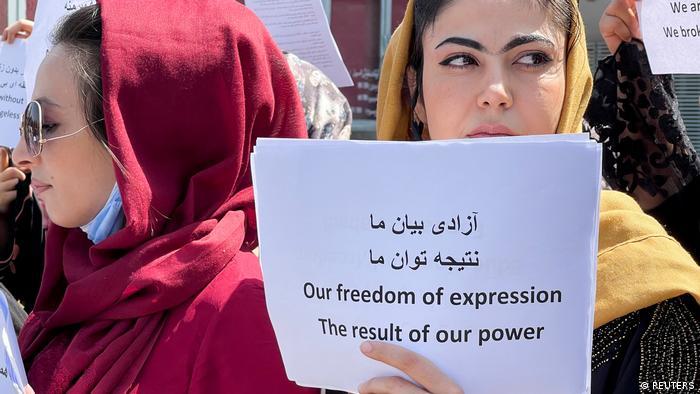 Not going down without a fight: Afghan women, despite being brutally suppressed, continue to demand their right to education, work and equal rights. But peaceful protests are being met with escalating violence, the UN human rights office warns. The radical Islamists have used batons, whips and live ammunition against protesters, with at least four killings and many more beatings 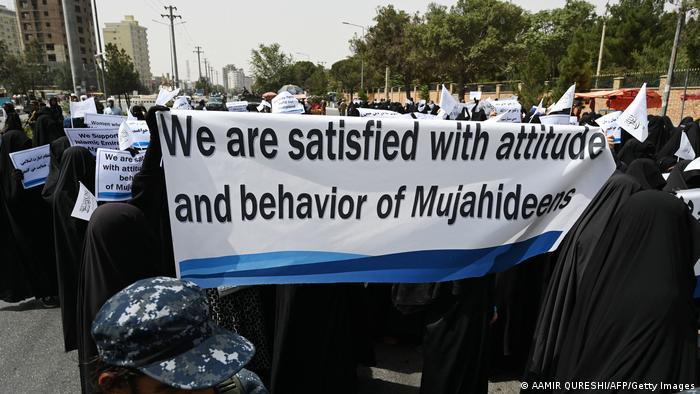 The "pro" faction: these women, on the other hand, say they are happy with the new order. Escorted by official security, they march the streets claiming full satisfaction with the attitudes and behaviour of the Taliban. Such women say those fleeing the country do not represent them and believe that the Islamist rules ensure their safety 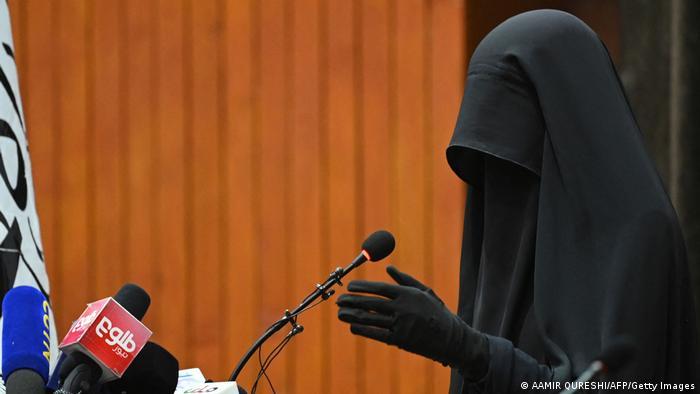 Aligning course: the pro-Taliban demonstration included invitations for journalists, in contrast to anti-Taliban protests. At the latter, journalists report having been intimidated or even abused. It's a clear sign of the changed times – particularly for women

Mohammad Zia Bumia, head of the South Asian Free Media Association for Afghanistan, said that after the collapse of Ashraf Ghani's government, many Afghan media outlets closed their operations, which rendered hundreds of Afghan journalists jobless.

The Taliban crackdown and the worsening economic situation are also the reasons behind a deteriorating media landscape, he said: "The Taliban have imposed strict censorship on media – on news as well as entertainment."

Reporters Without Borders says that women journalists have suffered more since the Taliban takeover of Afghanistan.

"The Taliban tried to arrest me on many occasions. They visited our house several times. When they gave a warning to my family, I had no choice but to leave Afghanistan," explained Saleha Ainy, an Afghan journalist who fled to Iran.

Despite the gravity of the situation, the Afghanistan crisis is receiving scant attention from the international community, as the Ukraine conflict and tensions over Taiwan dominate the global agenda. 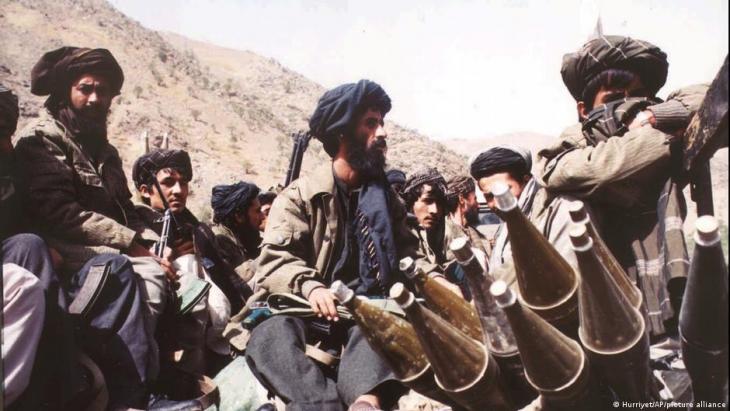 1996 all over again? When the Taliban seized power the first time the global community failed to grasp the potential consequences. Away from the global spotlight – and amid a lack of interest in Afghan affairs – the country became a hub of local and international militant groups. The recent killing of al-Qaida chief, Ayman al-Zawahiri, in Kabul is just one example of the imminent threat. "The Taliban have ties with international terrorists. As they consolidate themselves, their tactical and strategic ties with terrorism financiers and sponsors will grow and eventually jeopardise peace and security in the region and beyond," says former Afghan government official Farid Amiri

Some observers say the current situation in Afghanistan is disturbingly similar to the geopolitical scenario in the late 1990s. The Taliban seized power in 1996, but the global community did not fully grasp the potential consequences of that development.

Away from the global spotlight – and amid a lack of interest in Afghan affairs – the country became a hub of local and international militant groups. The recent killing of al-Qaida chief, Ayman al-Zawahiri, in Kabul is just one example of the imminent danger.

"The Taliban have ties with international terrorists. Their return to power has emboldened jihadi organisations in the region. As they consolidate themselves, their tactical and strategic ties with terrorism financiers and sponsors will grow and will eventually jeopardise peace and security in the region and beyond," said Farid Amiri, a former Afghan government official.

Jonas Poher Rasmussen's Oscar-nominated animated documentary “Flee” focuses on the life of a refugee from Afghanistan. Based on a true story, it centres around the question: when ... END_OF_DOCUMENT_TOKEN_TO_BE_REPLACED

The Biden administration could have used Pakistan’s economic crisis to compel the country to sever its longstanding ties to terrorist groups. Instead, the U.S. protects and ... END_OF_DOCUMENT_TOKEN_TO_BE_REPLACED

No country in the Islamic world is influenced as strongly by the traditions of Sufi culture as Pakistan. Yet the Sufis there have been under attack from Islamic hardliners for ... END_OF_DOCUMENT_TOKEN_TO_BE_REPLACED

Salman Rushdie's "Shalimar the Clown" is a furious tale about a lost paradise. In this interview with Lewis Gropp, Salman Rushdie talks about how the Indian army and militant ... END_OF_DOCUMENT_TOKEN_TO_BE_REPLACED

One year on from the Taliban's return to power in Afghanistan, some cracks are opening within their ranks over the crucial question of just how much reform their leaders can ... END_OF_DOCUMENT_TOKEN_TO_BE_REPLACED

"Flugt" is the world's first museum dedicated to the stories of those forced to flee. The new museum, which focuses on the fates of refugees then and now, is housed in a former ... END_OF_DOCUMENT_TOKEN_TO_BE_REPLACED
Author:
Ahmad Hakimi
Date:
Mail:
Send via mail

END_OF_DOCUMENT_TOKEN_TO_BE_REPLACED
Social media
and networks
Subscribe to our
newsletter