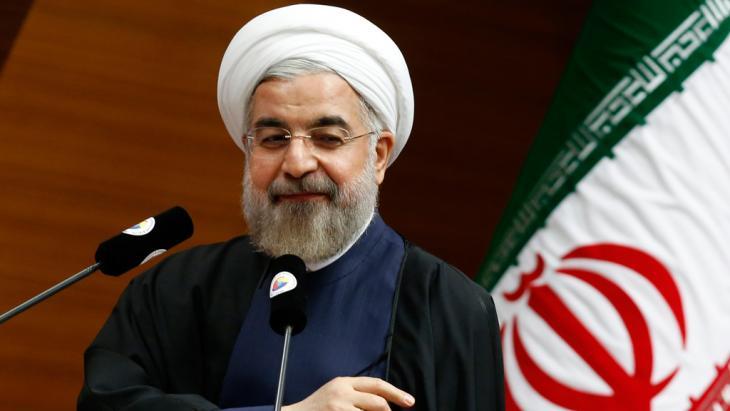 One year on from Rouhani's election victory
Surprise and disenchantment

A year on from his election victory, the Iranian president Hassan Rouhani has a success story to show for himself that barely anyone would have expected him to pull off: the breakthrough in the nuclear talks with the West. However, Iran's economic situation remains difficult and there have been few improvements in terms of freedom of speech and human rights. By Ulrich von Schwerin

When the moderate cleric Hassan Rouhani won the presidential election in the very first round of voting a year ago, many in Iran and in the West hoped it was the dawn of a new political era in Iran. His predecessor, Mahmud Ahmadinejad, had split the country and isolated it internationally with his radical rhetoric, his eccentric views on Islam and his erratic economic policies. And so, Rouhani's promise of moderate policies helped him to unite reformers and moderates behind him and gain 51 per cent of votes at the first attempt.

Now, a year after his victory, Rouhani has achieved more than even optimists had dared to hope. At the same time, however, he has dashed the hopes of some of his voters. On the positive side, he has succeeded – with the toleration of the revolutionary leader Ayatollah Ali Khamenei – in achieving some degree of rapprochement with the West after years of distrust, the highlight being a historical telephone conversation with US President Barack Obama during his visit to the UN General Assembly in September 2013.

New dynamic in the nuclear negotiations

Even more impressively, Rouhani has managed to bring new impetus into the deadlocked nuclear negotiations. After only three rounds of talks, his eloquent foreign minister Mohammad Javad Zarif negotiated an interim agreement with the group of five UN veto powers and Germany in Geneva at the end of November. In return for Iran permitting more intensive inspections and halting uranium enrichment, the financial and economic sanctions imposed during the conflict have been relaxed for an initial six months.

Although the last talks in May did not bring any progress, all parties were still visibly determined – despite harsh domestic criticism in some cases – to negotiate a long-term agreement by the end of July, as planned. Rouhani emphasised recently that Iran would "do its best to reach a final agreement". In an attempt to bridge the differences, a series of bilateral talks has also been arranged. The Geneva meeting between representatives of Teheran and Washington on 9 and 10 June, in particular, was a historic step. 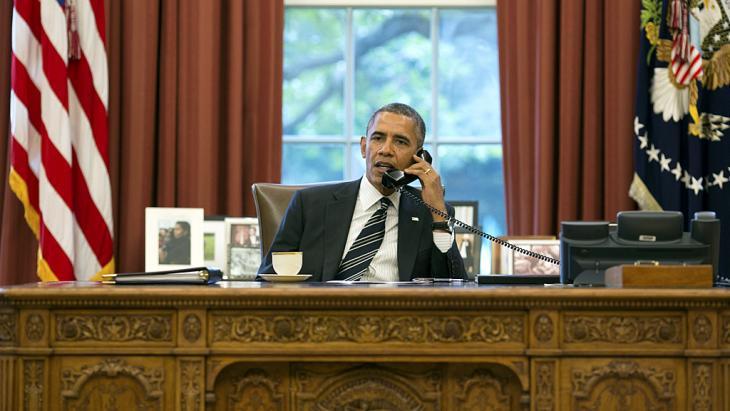 On 27 September 2013, the US and Iranian presidents spoke on the phone (picture above) for the first time since the Islamic Revolution. Afterwards, President Obama said: "Now, we're mindful of all the challenges ahead. The very fact that this was the first communication between an American and Iranian president since 1979 underscores the deep mistrust between our countries, but it also indicates the prospect of moving beyond that difficult history. I do believe that there is a basis for resolution."

While Rouhani has thus clocked up many points on foreign policy, his domestic scorecard is looking less impressive. In his election campaign, he had adopted demands such as strengthening freedom of the press and women's rights, thereby securing the support of the reform camp around the ex-president Mohammad Khatami and his influential predecessor Ali Akbar Hashemi Rafsanjani, after the latter was not permitted to stand. Yet once in office, Rouhani soon made it clear that fundamental reforms were not on his agenda.

Admittedly, the removal of conservative hardliners has brought improvements in media, cultural and education policy compared to Ahmadinejad's time in office, when the Basijis' narrow-minded understanding of culture was made a guiding principle across society. Rouhani has also repeatedly made statements against the banning of newspapers, the strict enforcement of dress codes and state intervention in moral and faith issues in general. Yet he has rarely gone further than mere appeals and largely symbolic steps.

Rouhani has ignored calls from his voters to reward the reformer Mohammad Reza Aref with a cabinet post for stepping back from the race in his favour. He has also ignored appeals to support the cause of the two imprisoned leaders of the 2009 Green Movement, Mir Hossein Mousavi and Mehdi Karroubi. In general, the president has been hesitant to pick fights with the conservative hardliners in the justice and security departments over civil rights issues.

This explains why little has changed in terms of freedom of speech and human rights. Since Rouhani took office, several newspapers have been closed down for publishing articles that displeased the powers that be. Moreover, critical journalists are still being put under pressure, and internet censorship has persisted. In April, the violent suppression of protests in the infamous block 350 of Teheran's Evin prison also cast a spotlight on the difficult situation of the political prisoners still imprisoned there.

There has also been a wave of executions, the like of which has not been seen for years. According to UN figures, at least 500 people were executed in Iran in 2013, in many cases after trials that did not meet international standards. Many of these death sentences were ostensibly passed for drugs-related crimes, yet this is often a mere pretext. Political prisoners are also being executed, most recently in June, when a man was accused of links to the People's Mujahideen. 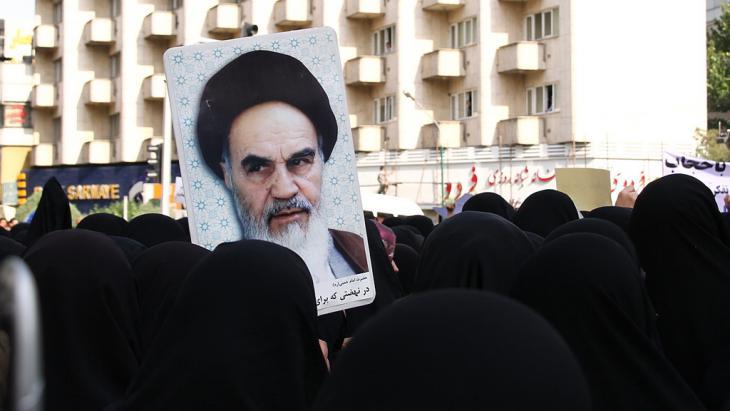 Harking back to the Ahmadinejad era: in early May 2014, hundreds of supporters of former Iranian President Mahmoud Ahmadinejad gathered outside the Iranian Ministry of the Interior to call for a more restrictive culture policy and stricter enforcement of dress codes for women

Many Iranians would be likely to tolerate the ongoing violations of their civil rights in return for improvements in their everyday lives. In this area, however, Rouhani's achievements so far have been modest. By reaching the interim agreement, he has managed to prompt the release of parts of the frozen oil income and authorisation for the sale of aeroplane components. Although the drastic plunge in the value of the currency has been stopped since Rouhani took office, there is still little trust in the riyal, and although the rate of inflation has fallen slightly, at 35 per cent, it is still high.

In addition, the oil embargo imposed two years ago and the radical restrictions on financial and trading activities are still in place. Even in the event of a final agreement on the nuclear front, it will be years before they are fully lifted. Rouhani is perfectly aware of this, which is why he is trying to lower state expenditure by cutting subsidies on electricity, fuel and staple foods. As a result, however, even large parts of the middle class are complaining that they can no longer afford standard products such as chicken.

At this point, the Iranians can still hope that Rouhani will succeed in paving Iran's way back into the international trading and financial systems by signing a permanent nuclear agreement, thus providing new impetus for the economy. On the other hand, the hope that the president will liberate society from the stranglehold of the justice and security apparatus and take steps towards greater freedom of speech, citizen participation and protection for human rights has once again proved an illusion.

Millions in Idlib depend on aid coming through a northern border crossing. On 10 July, the UN Security Council votes whether to keep it open. The decision may hinge not only on ... END_OF_DOCUMENT_TOKEN_TO_BE_REPLACED

Mourad al-Marouai was just nine when a landmine killed him on a beach in war-torn Yemen, a tragedy that will haunt his family forever. After a swim, the little boy "suddenly ... END_OF_DOCUMENT_TOKEN_TO_BE_REPLACED

This year’s Morgenland Festival opened with the premiere of Kinan Azmeh’s musical theatre piece, “Songs for Days to Come”, based on fifteen poems by contemporary Syrian poets. ... END_OF_DOCUMENT_TOKEN_TO_BE_REPLACED

Rumi's poems, though generally stripped of their Islamic symbolism, are hugely popular around the world. Yet Islamic mysticism is still very much at the heart of these verses. ... END_OF_DOCUMENT_TOKEN_TO_BE_REPLACED

The Ukraine war is changing the global geopolitical landscape. Ali Khamenei, Iran's most powerful man, is already cosying up to Russia in anticipation of a harsh post-war reality ... END_OF_DOCUMENT_TOKEN_TO_BE_REPLACED

Analyst Iyad El-Baghdadi examines the ongoing tensions between the United States and the two Gulf states – Saudi Arabia and the UAE – and their geopolitical implications in ... END_OF_DOCUMENT_TOKEN_TO_BE_REPLACED
Author:
Ulrich von Schwerin
Date:
Mail:
Send via mail

END_OF_DOCUMENT_TOKEN_TO_BE_REPLACED
Social media
and networks
Subscribe to our
newsletter