Abdelaziz Aouragh opened the world's first halal shop for sexual enhancement products. It is but one indication that many young Muslims are charting their own course in managing adherence to a faith whose sexual morals historically have been interpreted by arch conservatives. James M. Dorsey reports 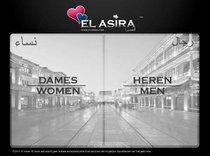 No seductive pictures of attractive women or enticing, suggestive texts: at El Asira, all products are halal, i.e. permissible under Islamic law

​​Abdelaziz Aouragh, a 29-year old Amsterdam-born practicing Muslim of Moroccan heritage with the instincts of a Dutch trader, hardly fits the profile of a purveyor of sex articles such as capsules that "increase male performance, desire and pleasure," pills to heighten women's desire, stimulators for him and her and cocoa butter, water and silicon-based lubricants.

Yet, in a faith community perceived as repressive of women and severely restrictive of intimate gender relations, Aouragh's online El Asira webshop – the world's first halal (religiously-endorsed) shop for sexual enhancement products – is a booming success. So popular in fact, that Aouragh had to take the shop offline four days after its launch and move it to a new Internet service provider because his original California-based host GreenGeeks was unable to accommodate the traffic volume it generated – 60,000 hits a day.

GreenGeeks also allegedly no longer wanted to be associated with El Asira once it realized that the site operated in accordance with Islamic law.

"We do not tolerate abusers of our terms of service and we definitely do not accept customers who have harmed our service, then continue to disregard the violations and procedures of our business. With that being said, your account will be terminated and you will no longer be a customer of GreenGeeks and will have to find another web hosting provider," GreenGeek's Karl Davids told El Asira in a March 30 e-mail. GeenGeeks CEO Trey Gardner declined to comment on the nature of the alleged abuse and disregard. 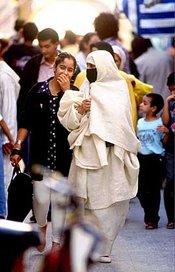 "The image of women in the kitchen, submissive, dressed in a burkah isn't true. Islam has a lot of respect for women," Abdelaziz Aouragh says

​​El Asira – Arabic for The Society – is but one indication that many young Muslims like their counterparts in other monotheistic religions are charting their own course in managing adherence to a faith whose sexual morals historically have been interpreted by arch conservatives.

While Aouragh errs on the side of caution relying on conservative interpretations by Saudi religious authorities, a host of contemporary Muslim artists, many of them women, have recently opted to paint naked models despite widespread belief by Muslims that the Koran bans nudity as well as life-like portraits of human beings. "We are promoting this dialogue," Aouragh says although he asserts that Muslim artists who portray nudity lack a correct understanding of Islam.

El Asira's homepage, www.elasira.eu, unlike traditional sites that sell sexual enhancement products, reflects Aouragh's conservatism. There are no seductive pictures of attractive women or enticing, suggestive texts. Instead, its homepage is a sober black and grey street with a dividing line in the middle that grants men and women separate entry – women on the left, men on the right.

Once inside, clients can browse in Dutch, Arabic or English through more than a dozen products, mainly massage oils, lubricants and tablets that claim to act as aphrodisiacs. Illustrations are restricted to boxes, tablets, tubes and bottles, mostly in pink or blue with the brand's logo, a black flame.

Religious blessing from a Saudi imam

An online sex shop in line with religious sensitivities: El Asira's products do not sport pictures of naked people or foul language

​​Before launching El Asira, Aouragh sought religious blessing from a Dutch imam, who in turn introduced him to a sheikh from Saudi Arabia, home to one of Islam's most puritan interpretations of Islam. "You're old news. Such products are already being sold in the holy cities of Mecca and Medina and so is lingerie," the unidentified sheikh told Aouragh in a phone conversation when asked whether Islamic law permitted the sale of sexual enhancement products.

Aouragh says his target audience are married couples, Muslim and non-Muslim, who are looking for an online shop in line with their religious sensitivities "that does not focus on pornography and the extravagant side of erotica."

But Aouragh concedes that he has no control over who enters his site and the Riyadh-based sheikh declared he could not be held responsible for who his customers may be and what they may do with his products. An unmarried man, for example, who purchases stimulating pills obviously for an extra-marital affair or a married couple that might be having sex during the wife's menstruation are sinners rather than their vendor, the sheikh said.

El Asira's success is prompting Aouragh to expand his empire with a planned physical concept shop in a conservative Islamic country, most probably in the Gulf, as well as lingerie and a jewelry line. "The image of women in the kitchen, submissive, dressed in a burkah isn't true. There is a lot of love. Islam has a lot of respect for women. Our shop puts the woman at the centre of things," Aouragh says.

While earning money and building an empire, Aouragh hopes that his business will contribute to cross-cultural understanding. "Everybody is talking about Islam in a negative way. I am trying to get something positive out of the dark," he says. The El Asira website adds: "Muslims have to deal with stereotypical prejudices by some non-Muslims on the topic of sexuality within the Islam. We want to share with other Muslims in a positive way our contribution to a broader view of sexuality and eroticism within the Muslim community for Muslims themselves, as for others."