Open-Air Art in Syria
Dialogue with the Angle Grinder

The actor Faris al Helou, popular throughout the Arab world, brought fifteen sculptors together in the heart of Syria to work for a whole month in the open air. Manuela Römer went to see the artists at work

Susanne Paucker's face and arms are coated in marble dust. The thirty-year-old sculptor puts the finishing touches to the head of the Greek goddess of love, Eros. Her sculpture's contours are enhanced by the gentle evening light, which paints the coastal mountains east of the harbour town Tartus a golden orange.

The German artist is one of seven foreigners invited to Mashta al Helou for the international sculpture symposium. As well as Paucker, the participants include one French artist, one Russian, one Armenian, two Italians and a sculptor from Ecuador, along with eight Syrian artists.

This is the second time the Syrian TV-celebrity Faris al Helou has invited sculptors to a symposium in his home town.

"The results are wonderful, better than I could have dreamed," is how he sums up this year. "It was my aim for the public to get into conversation with the sculptors so that art can be experienced in practice, without having to engage with it in theory."

The idea has worked. For his project the actor chose a place on Mashta al Helou's main thoroughfare. As the area's landscape and archaeology attracts many tourists, the artists had a constant traffic of public from all over the Arab world.

"Glass studio" on the street

The Syrian sculptor Issa Dieb, who also comes from the region but works in the capital Damascus, describes how the people overcame their shyness and reserve towards art in the face of the "glass studio" on the street: "Sure, art, particularly sculpture, is not particularly important in people's lives in the town. But here they have seen how an artwork is created – from the first day right up to the finished sculpture. 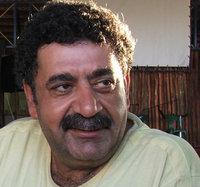 ​​They have kept a closer eye on the progress of the work than us sculptors ourselves. And alongside their curiosity and questions, they have also come to us with drinks, fruit and ice-cream."

Individual sculptors have also been invited privately for dinner. "Even though we don't speak a word of Arabic," says Susanne Paucker. "The whole family was there and cooked for us. And when we went for a drink somewhere in the town, the people almost never let us pay. The hospitality here is amazing."

An exhibition for eternity

In his sculpture, the Syrian artist Dieb seeks to represent the relationship between women and trees. That both in their different ways provide fruit and life is interpreted by Dieb as showing love towards humanity. There were no instructions from the initiator, Faris al Helou, for the interpretation of the subject, "the beauty of love".

He made just one condition: the sculptures could not be place in private spaces; they must remain in the public domain. Thus the previous year's works, made entirely by Syrian sculptors, are spread around the whole town.

The same applies to the newly finished sculptures. There is to be a permanent exhibition, "so that the people's eyes become accustomed to art" Faris al Helou says. "Here in the town there are restaurants and houses, but no cultural life. This is exactly what I would like to change." If the symposium continues to take place every year there will eventually be a sculpture in front of every house in Mashta al Helou.

There is a good chance this will happen. Alongside state funding, megastar Al Helou was also able to gain private sponsorship this year, including large international firms. The whole country has clearly taken an interest in the symposium, Susanne Paucker adds.

"We were surrounded by journalists the whole time. The whole month, from the beginning right to the end we were continually filmed and interviewed. Sometimes it was exhausting to have to explain everything again and again, but on the other hand this direct contact with the people was the nice thing about it. For instance I always had to try and translate the Latin sentence by the Roman poet Virgil which I used on my sculpture: ‘Love conquers all.'"

Aleppo, Capital of Islamic Culture 2006
In Praise of Times Past
The Islamic Conference decided to select capitals of culture from the Islamic world to be representatives of the positive face of Islamic civilisation. Mona Naggar has been taking a look around in Aleppo, one of this year's Capitals

END_OF_DOCUMENT_TOKEN_TO_BE_REPLACED
Social media
and networks
Subscribe to our
newsletter