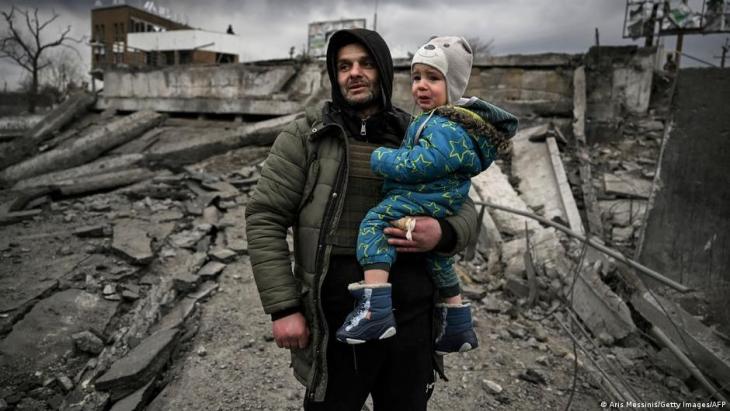 Researchers have spent years collecting evidence of Russian war crimes in Syria, using everything from social media to satellite images. Open-source research has evolved. Cathrin Schaer asks whether it could help bring justice to Ukraine faster

Russian attacks on Ukraine bear many similarities to those witnessed in Syria. In both countries, Russian bombs have hit civilian infrastructure, schools and kindergartens, hospitals and markets. Some of these incidents may qualify as war crimes under international humanitarian law.

In Ukraine and Syria, such incidents are being tracked by open-source researchers. The community of amateur and professional online investigators use freely available information – hence "open source" – to collect and verify a broad spectrum of incidents.

Open-source research born of the war in Syria

But while in Syria, the field of online open-source research was only just evolving, in Ukraine it has matured.

"Everything that happened in Syria, as well as what happened in Ukraine between 2014 and 2017, really laid the groundwork for what is happening today," said Eliot Higgins, founder of one of the world's leading open-source research organisations, Bellingcat. "It was basically in Syria where we learned all the processes we are now using with Ukraine. It's also where we built a lot of the relationships we now have with the tech community, with accountability organisations, policymakers and others."

Bellingcat has been logging incidents that appear to depict civilian impact or harm since the beginning of the conflict in Ukraine.

We have now visualised this data in a TimeMap feature that allows users to explore what we have found https://t.co/rUBG22X4SV

Mnemonic, a Berlin-based non-profit, is playing a major part in these efforts. Mnemonic started with the Syrian Archive, which was set up to preserve digital evidence of human rights violations during the Syrian war.

The archive was founded in 2014 by Syrian journalist and digital security expert Hadi al-Khatib after he noticed activists did not have a central place to store videos and other material they collected in Syria. Potential evidence of war crimes was also being lost. Since then, al-Khatib and his team founded a Yemeni Archive, a Sudanese Archive and, as of this past month, began work on a Ukrainian Archive to store materials Bellingcat identifies as important.

"It only took us a few days to set up the Ukraine Archive," al-Khatib explained. "We knew how to do it and we know there are certain standards and protocols that need to be in place for preserving this material," he said.

If the digital material is to be used in court, the organisation needs to be able to show where it came from and that it hasn't been manipulated. "It took us years to get to that stage with material from Syria," al-Khatib said. "We learned it all there."

Additionally, al-Khatib pointed out that Mnemonic has already been training Ukrainian activists on how to work with raw material – it's advice Syrian activists didn't get until much later.

There are other unhappy lessons open-source researchers learned from Syria.

"When we saw cluster munitions being used in Ukraine, we recognised them more easily," al-Khatib explained. "We knew them from Syria. We knew what they sounded like and how there are lots of different small explosions happening at the same time, in a random pattern." 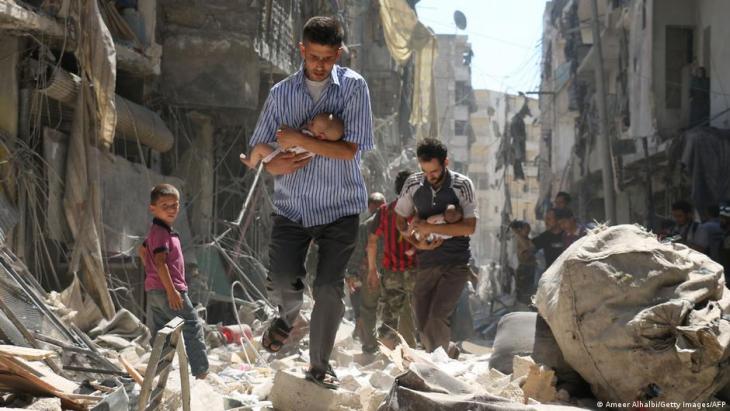 'What happened in Aleppo in 2016 is happening in Ukraine now': founder of the Syrian Archive, Hadi al-Khatib argues that the current evolution of open-source investigations is also a question of political will. "There are a lot of European countries and organisations opening investigations and accountability cases on Ukraine right now. It was much more of a struggle for us to do that with Syria. I think they should also consider what Russia did in Syria," he concluded. "It's very important for us. It's the same thing, just in different countries"

Thanks to Russian attacks on civilian infrastructure, hospitals and even farms in Syria, Mnemonic also established what al-Khatib calls "better pattern analysis". He revealed that there are certain indicators that more or less prove, for example, that a hospital was not accidentally hit by a Russian missile. "You need to be able to prove intent, and we now have a clear workflow for that," al-Khatib added. "We understand how to do that now because what happened in Aleppo in 2016 is happening in Mariupol and Kharkiv now."

The technology involved has also changed a lot, said Sam Dubberley, who heads Human Rights Watch's digital investigations lab. Cameras on mobile phones are better, as well as Internet connectivity, he pointed out. In Ukraine, over 70% of the population had Internet access before the war began, according to the World Bank. Open-source investigations are also now seen as credible and necessary, Dubberley noted.

"Back in 2011 [when the Syrian revolution began], we were really working out what all this meant and how to use it," he explained. "Today, we have more advanced conversations immediately. We don't have to convince anyone of the importance of this work."

What's often called "open-source intelligence" has been used since World War II, when intelligence agencies began to monitor foreign media outlets. Today, thanks to the vast amount of online resources, open-source researchers use everything from social media platforms, to flight or shipping trackers to satellites pictures and unsecured conversations over radios or phones.

"Our city center is being erased." That's what one witness to the war in Kharkiv, Ukraine's 2nd city, told @hrw. We mapped the homes of the people we spoke to to videos of their neighborhoods, schools, churches, shops destroyed in 1st 11 days. Explore here https://t.co/HDbnjCeIAO pic.twitter.com/FZ85VWtt8i

The chance to demand accountability

It is usually not possible to use open-source research on its own when it comes to bringing legal cases against war criminals or for an organisation like his to publish an "unimpeachable" report on an incident, Dubberley said. Additional material, such as interviews with eyewitnesses, is required, he noted, which takes time.

Bellingcat's Higgins pointed out that, as the field has gained in importance and attention, there are more open-source researchers than ever too. "By growing our audience, we become more effective as an organisation," he said.

Al-Khatib pointed out another important factor in the current evolution of open source investigations, on the timeline from Syria to Ukraine. "It's also about the political will," he argued. "There are a lot of European countries and organisations opening investigations and accountability cases on Ukraine right now. It was much more of a struggle for us to do that with Syria. I think they should also consider what Russia did in Syria," he concluded. "It's very important for us. It's the same thing, just in different countries."

"A lot of the people working on Ukraine are the same people who have seen Russia getting away with this in Syria for years," Higgins concluded. "So there's frustration and even anger. That is motivating a lot of people. They see this as an opportunity to make sure there is accountability."

Many Turks are dissatisfied with the international status of their country. At the same time, opinion polls reveal great scepticism among the Turkish population towards the USA. ... END_OF_DOCUMENT_TOKEN_TO_BE_REPLACED

Very different Western reactions to the suffering in Ukraine and the Arab world show that there is a profound rift among cultures. Essay by Michael Young END_OF_DOCUMENT_TOKEN_TO_BE_REPLACED

Russia's ranking on the World Press Freedom Index has fallen again over the Kremlin's wartime censorship of the Ukraine conflict. From Myanmar to Mexico, journalists continue to ... END_OF_DOCUMENT_TOKEN_TO_BE_REPLACED

From the Euphrates to the Mekong, dams that ensure one country's water supply risk leaving others parched. But shared water resources can be a source of peace as well as conflict ... END_OF_DOCUMENT_TOKEN_TO_BE_REPLACED

Middle Eastern countries are still on the fence when it comes to the Russian invasion of Ukraine. Their citizens point to the West's double standards surrounding conflict and ... END_OF_DOCUMENT_TOKEN_TO_BE_REPLACED
Date:
Mail:
Send via mail

END_OF_DOCUMENT_TOKEN_TO_BE_REPLACED
Social media
and networks
Subscribe to our
newsletter