Operation Anfal in Iraq
Victims without a Lobby

The Iraqi military campaign "Operation Anfal" began exactly 20 years ago in the Kurdish part of the country. More than 100,000 people were taken from their homes, but the ongoing conflicts in Iraq have pushed the victims out of the public consciousness. Ariana Mirza reports

​​The codename for the military campaign came from a Qur'an sura: al-Anfal, the spoils. The Iraqi army launched a major offensive against the Kurdish population in the north of the country in the spring of 1988.

To mark the twentieth anniversary of Operation Anfal, a group of international experts met up with representatives of the victims in Berlin. The conference focused on developing perspectives for finally coming to terms with the massacres.

"Time does not heal wounds. Wounds are handed down from generation to generation." The peace researcher Dr. David Bloomfield opened the debate on dealing with the past in Iraq with a stark warning.

Bloomfield, who has accompanied reconciliation processes in Rwanda and Northern Ireland in the past, pointed out that reconciliation can never be forced.

"It is up to the victims whether and when they forgive." However, Bloomfield's experience shows that victims of violence and persecution are willing to make peace as soon as they have the feeling that justice will be done.

On the margins of society

The victims of Opeartion Anfal are still waiting for justice. One of them is Shazada Hussein Mohammed, who was imprisoned as a young woman. Her husband and all her relatives have been missing since then. All she has left is one daughter. 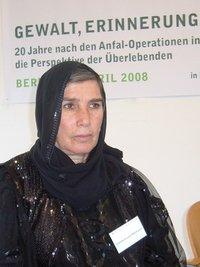 Anfal victims like Shazada Hussein Mohammed, who was imprisoned as a young woman, are still waiting for justice

​​As her village was destroyed in the campaign, Shazada Mohammed has been living in an interim camp for the past two decades. She demanded that the perpetrators should be put before a court and punished.

Nothing gave her more satisfaction than appearing as a witness at the first Anfal case in 2006, she told the conference. But it is also time for the international community to face up to its own responsibility, she added. "The states that supplied the weapons then have to be brought to rights now."

Shazada Mohammed's story is far from unusual. An estimated 10,000 survivors of Operation Anfal, most of then women, lost not only their families, but also their entire social networks. Many still lead a life on the margins of society today.

As only a handful of the more than 3000 mass graves have been exhumed to date due to the security problems in Iraq, most of the women are still unsure what happened to their husbands. The women are trapped in a grey zone in society, between the status of wives and widows. The children, especially the girls, also have to deal with the stigma of growing up without a father. 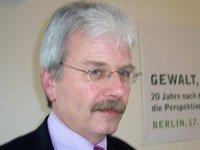 "It is up to the victims whether and when they forgive." Dr. David Bloomfield has accompanied reconciliation processes in Rwanda and Northern Ireland

​​The meagre pension that the Kurdish regional administration has paid the survivors since 1999 keeps them above water in financial terms. But they have been unable to re-integrate into society. Instead, the victims of Operation Anfal, like other groups of victims in Iraq, are constantly under threat of being instrumentalised.

Anfal victims have already become the plaything of national and regional authorities in a conflict between them, the experts warned in Berlin. The result of this policy, they stated, is a fragmentation of Iraqi society. "Solidarity is being broken down."

The proceedings against the perpetrators must go on

Both Western arms suppliers and the Iraqi central government ought to contribute to compensation for the Anfal victims, she said. And she considers it equally important to continue the court cases against the perpetrators begun in 2006. "It is a long-term process, which we are continuing to push undeterred."

The most questionable role in the reconciliation process over the coming years is undoubtedly that of the jash, the Kurdish collaborators referred to as "donkey foals". They were subject to an amnesty as early as 1991.

Gulnaz Aziz Qadir defended this decision in Berlin, with reference to concerns over law and order in the region. "We had to stop more blood from being spilled." The amnesty for Kurdish collaborators, she said, had ultimately helped make Kurdistan the only peaceful part of today's Iraq.

The Kurds of Syria
An Insecure Stone in the Syrian Mosaic
The various ethnic and religious groups in Syria live relatively peacefully together. But many Kurdish Syrians find themselves stateless in their own country. Manuela Römer reports that they do not feel part of the so-called "Syrian mosaic"

END_OF_DOCUMENT_TOKEN_TO_BE_REPLACED
Social media
and networks
Subscribe to our
newsletter