Opus Prize for Aicha Chenna
"Secular in My Head, Muslim in My Heart"

The Opus Prize, worth 1 million US dollars, is awarded to people who are motivated by their faith to carry out humanitarian work. This year the award went to an Arab Muslim woman for the first time – Aicha Chenna of Morocco. Martina Sabra visited the founder of the women's organization Solidarité Féminine in Casablanca

The Opus Prize has been awarded in the US since 2004. This year, Aicha Chenna was honoured for her pioneering work with single mothers and their children

​​ The bathhouse of the women's organization Solidarité Féminine is located in the city centre of Casablanca, a modern hamam with hairdressing salon and fitness studio. Twenty-year-old Nawal, an employee who takes us on a tour of the establishment, was not always as confident as she appears today. When she fell pregnant three years ago at the age of 17, just before she was about to take her school-leaving exams, her world fell apart.

"When people find out that you have a child and you're not married, then they don't accept you. It's regarded as a huge disgrace in Morocco."

Help for the Defenceless

The father of the child refused to accept any responsibility and ended the relationship. But Nawal opted to keep the child nevertheless. She had to face the consequences of her decision alone, and had to leave school. Because Moroccan law basically views sex outside marriage as prostitution, and therefore as a punishable offense, she also faced the threat of six months in jail.

But Nawal found the help she needed.

"I went to the sisters of Mother Teresa in Casablanca first. It was there that I heard about the Solidarité Féminine association."

Taking a quick break from tireless commitment to 'female solidarity': Zahra Karin in the kitchens of 'Solidarité Feminine' in Casablanca

​​ Through their contacts to the authorities, social workers at Solidarité Féminine made sure that Nawal would not have to serve a prison sentence. They also helped the student to find an apartment. Following the birth of the child and a trial period, Nawal was also offered the opportunity to pursue a two-year traineeship in home economics.

Nawal is now 20 years old, and she is due to complete her training in just a few months. Her two-and-a-half-year-old child – a beautiful, alert little boy – is taken care of at Solidarité Féminine, in the organization's own kindergarten.

It is success stories such as this that gave her the courage to continue, says Aicha Chenna, chairwoman of Solidarité Féminine. The qualified nurse founded the association in 1985, as the first organization for single mothers in the Islamic world. At that point, the stimulus came from her work at the Moroccan social ministry. It was there that Aicha Chenna came into almost daily contact with women who gave their children up for adoption. Many of them had suffered rape or sexual abuse.

"The unmarried mothers are often the youngest daughters of poor families from the country. They are sold by their families at the age of seven or eight to work as maidservants in city households," explains Chenna.

"They can neither read, nor write, and have no idea about sexuality. These girls are often harassed as they go about their work, and even raped. Or they fall for men who promise them the world. If they get pregnant, they are then rejected by society. I found this hypocrisy unbearable." 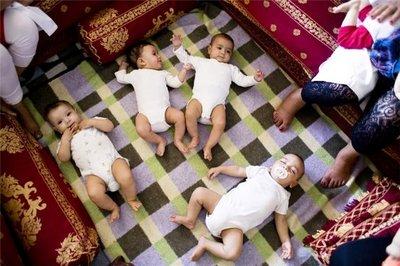 A refuge and a home for the children of unmarried women: Initiatives such 'Solidarité Féminine' are viewed favourably by politics, but with strong reservations by conservative sections of society

​​ Aicha Chenna and her supporters wanted to make it possible for the young mothers to keep their children and lead an independent life. They did this by focusing on the strengths of the affected women – their knowledge of cooking and running a household.

In 1986, Solidarité Féminine opened a cook shop in a working-class district of Casablanca, to first in Morocco to be run exclusively by single mothers. Numerous other income-generating projects were set up in the years that followed.

An important endorsement of her work was the reform of the Moroccan family and marital status law in the year 2004. Now, Moroccan courts can order paternity tests. Unmarried couples that conceive a child can get engaged afterwards thereby avoiding punishment. Unmarried mothers with no partner do not however benefit from this law.

"Engagement is a mutual agreement. But that does not apply to all women," explains Chenna. "And this is the problem: the others are still regarded as prostitutes. They can still expect to end up in prison for up to six months."

Aicha Chenna, who completed the Hajj pilgrimage to Mecca many years ago, and whose friends call her "Hajja", embodies a modern, liberal Islam. Her personal motto is "secular in my head, and Muslim in my heart".

That Solidarité Féminine has now received the highly remunerative Opus Prize for decades of often very hard pioneering work, is a great encouragement not only to the 68-year-old founder, her staff and to all single mothers in Morocco. The honour also sends out an important signal against all forms of religiously motivated intolerance.

Marrakesh Elects Its First Woman Mayor
Equal Rights and a Change of Generation
Last summer saw the election of the 33-year-old Fatima Azzahra al-Mansouri as the first woman mayor of the city of Marrakesh in the south of Morocco. As Alfred Hackensberger reports, she won the vote in spite of the warnings of conservative politicians

END_OF_DOCUMENT_TOKEN_TO_BE_REPLACED
Social media
and networks
Subscribe to our
newsletter