The newly rediscovered and reprinted Orient photographs by Berlin photographer Hermann Burchardt from around 100 years ago appear startlingly unstaged and free of the embarrassing voyeurism demonstrated by some of his contemporaries. Andreas Pflitsch reports 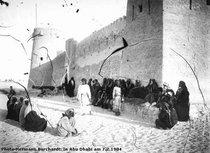 Hermann Burchardt's work is free of the typical Oriental fantasies of his time, writes Andreas Pflitsch

​​Almost 2000 negatives, glass and celluloid plates bequeathed to the Berlin Museum of Ethnology in 1911 from the estate of Hermann Burchardt lay dormant and forgotten in their boxes, a sleeping beauty that slept away almost the whole twentieth century. Until, that is, Annegret Nippa began the detective work of systematically sifting through this neglected collection.

The first task was to geographically place the material gathered by the avid traveler Burchardt, who photographed extensively not only in the Arabic Middle East and North Africa, but also in Turkey and Persia.

Burchardt, born in Berlin in 1857, gave up his unwanted profession of businessman after the death of his father, which left him with a large inheritance. He then devoted his new life as a man of independent means to his "diffuse desire to travel elsewhere."

From the Libyan desert to Dubai and Oman

His first trip in 1893 brought him to the oasis Siwa in the Libyan desert. Later he settled in Damascus for a few years, using this as a base for his travels throughout the region until he was tragically murdered in Yemen due to a case of mistaken identity.

Most of Burchardt's photographs have now been dated and their geographical location determined. A small but exquisite part of the collection has now been masterfully edited and commented in a volume with texts in both English and German.

It covers Burchardt's journey over the period of December, 1903 to March, 1904, when he traveled from Basra to Kuwait and on to Bahrain, Qatar, Abu Dhabi, Dubai and finally Oman.

Almost one hundred photographs, landscapes, port and market scenes, as well as portraits are commented upon in the volume with carefully researched information from the photographer's diary and helpful digressions into the economic history and everyday culture of the region.

The collection is rounded off with a detailed introduction and a reprint of a lecture given by Burchardt in February, 1906 at the "General Assembly of the Berlin Society for Geography."

The introduction explains the difficulties the editors had with the sources for the material and makes a programmatic plea for a "visually based ethnography," which can offers insights "that have been forgotten in oral history and not mentioned in written accounts."

Communication between the present and the far away

"Photographs do not just serve our lonely memory of things past; they serve as a medium for an ongoing communication between the present and the far away."

The authors do, however, occasionally drift off course and attempt intellectual chin-ups, for example when the address "integrity as a gesture in the tradition of objectivity."

But this kind of jargon is thankfully an exception, and the introduction concentrates mostly on elucidating the political situation in the Gulf region at the turn of the twentieth century, the role of the British in the region, and the cultural and historical dimensions of the tourism that was suddenly seeing its first small boom.

An informative excursion into the history of photography in the Middle East helps clarify the often misunderstand Islamic ban on images. Already early on, in theological circles the understanding was that photography does not represent a vain imitation of God's creation, but rather an abstraction, which is, similar to an image in the mirror, religiously unobjectionable.

None of the typical Oriental fantasies

The authors rightly criticize the immediate suspicion indiscriminately launched at all who addressed the Orient in one way or another during the time of colonialism and imperialism. Burchardt's work, the authors say, is free of the typical Oriental fantasies of his time.

And, in fact, the images included in this volume are startlingly unstaged and free of the embarrassing voyeurism exhibited by some of Burchardt's contemporaries. This means, however, that the charm of the photographs only reveals itself when one looks carefully and patiently.

Exotic sensations and icons of the other are not to be found here. Instead, the viewer is confronted with quiet images far away from pathos that only gradually catch the eye. They then slowly allow the vastness and peacefulness of these landscapes to be felt.

Three images of a valley near Masqat, photographed from different perspectives yet linked together through a watch and water tower visible on all three, give viewers the impression after a while that they are familiar with the place.

Rocks, branches, and boulders seem close enough to touch. This is no lesson about a foreign other; instead, it shows us something quite familiar.

Vivid insights into a long-gone world

Burchardt's sober character is to the benefit of his photographic work, but it gets in the way of his abilities as a writer. His lecture reprinted here is rather boring in comparison. His clumsy prose does not come close to creating the same atmosphere as his photographs.

In their introduction, the authors praise Burchardt for having "shown that day to day life is worthy of being photographed, not just the exceptions but the rules, not the big events but the usual, not the highpoints but the symmetry." His images allow for strikingly fresh insights into a world that is long-gone. This is, in the true sense of the word, something wonderful.

The Photography of Yto Barrada
A Pervasive Sense of a People in Limbo
Yto Barrada's most recent exhibition "A Life Full of Holes – the Strait Project" explores life in her Moroccan home town, Tangier, overlooking the Strait of Gibraltar. Charlotte Collins met her in London

END_OF_DOCUMENT_TOKEN_TO_BE_REPLACED
Social media
and networks
Subscribe to our
newsletter