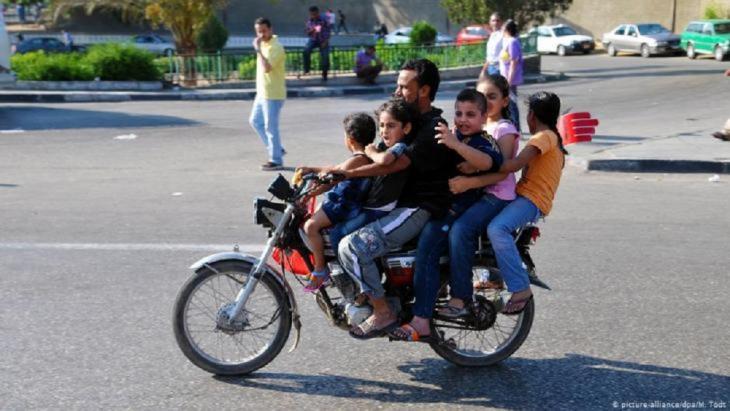 On every public occasion, the Egyptian regime reiterates a set of themes we all know by heart. The ideological toolset of the official discourse is limited; it has been deliberately reduced to a list of simple binary statements, which are hammered home with endless repetition. President Sisi takes every opportunity to talk about the population problem, or more precisely, about the population as a problem, and the official media join him in recycling the message. The duality of the army and the people, in the lingo of regular politics, sits beside the duality of the state and the population.

Again and again, government officials talk about the total cost to the state of each individual from the cradle to the grave, and the budget allocations per capita for public services, education, health and the like. Such rhetoric portrays the population as a burden on the state and as an obstacle to, rather than an aim of development. All too easily the policy equation becomes upended. Instead of the state being accountable to the people, the population is made accountable to the state.

Fertility rates in Egypt are continuing to fall steadily (except for a few limited exceptions in certain years). Since 1950, fertility has declined from a rate of 6.8 to 3.2 this year. Projections by the United Nations assume that the rate will have fallen below 2.1 by 2075 (this is the rate required to achieve a stable population), after which the population will begin to decline. 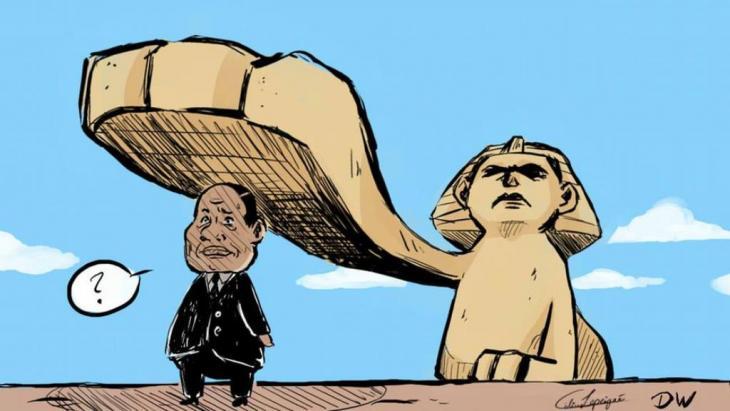 No state at the service of its citizens: "When the Egyptians are addressed as the "people', this means a national effort or mobilisation. Egyptians are supposed to rise up in national struggles against something, sacrifice themselves, legitimise the government and close ranks. If, on the other hand, people demand something from the state, then they become a burden and in the language of the regime they are then the 'population'," argues Egyptian publicist and author Shady Lewis Botros

The decline in fertility is actually ongoing, but it is not evenly distributed. The poor have more children, and the rates in rural areas are higher than in urban settings. Similarly, the rates are higher among manual than among white-collar workers, whilst those with higher education prefer smaller families than their fellow Egyptians.

From this point on, the regime's language shifts from "people" to "population" as a statistical entity for which one does not have to take responsibility. "Population" is then those poor Egyptians among whom the birth rate is not falling.

“The people” (schaab in Arabic) is a relatively modern term upon which the logic of the nation-state is built and in which the state is a physical embodiment of the soul of the people, its history and its culture. “The population” (sukan in Arabic), on the other hand, is a still more recent expression, a statistical visualisation of what the notion of the people represents, by means of which an ideal scenario can be calibrated, formulated and set in tables, mathematical equations and graphical illustrations. Neither of these terms is an adequate representation of reality, reflecting neither the individual as a citizen nor the collective. “The people” has a poetic ring, whilst "population" sounds mathematical, yet both terms are exploited to various ends by the regime.

The people may ask for nothing

When the Egyptians are addressed as the "people", this means a national effort or mobilisation. Egyptians are supposed to rise up in national struggles against something, sacrifice themselves, legitimise the government and close ranks.

If, on the other hand, people demand something from the state, then they become a burden and in the language of the regime they are then the "population".

The term “population” lacks any charisma or charm. It reduces people to objects, factors in a state profit and loss account. It is true that population growth swallows up all progress in development. In this respect, the government discourse is correct, but this does not mean those in power are released from their responsibility.

The notion of the people implies unity, an artificial unity perhaps, but one that is both inspiring and dangerous. On the other hand, the concept of the population carries with it a wide range of possible options for sub-division, according to age, gender, geography, income, class, religion, disease, productivity and consumption.

The blame is made to fall on certain groups such as the poor, those living far from the centre of power, the rural population and those living in slums in towns and villages in Upper Egypt. These groups are treated – in theory as in practice – as obstacles to progress.

Slums and those who dwell in them are removed to make way for the rush of investment and the cycle of capital, and the population is uprooted in geographical cleansing operations as if they were cancerous tumours. Some of these transfers are deliberate and forced, whilst others are achieved by displacement over time, as a consequence of market forces.

Falling fertility rates is a global phenomenon. By the end of the century, the global average rate will decline to 1.7, whilst the overall population of the planet will have begun to decline approximately two decades before that. The reasons for this are many, including urbanisation and the consequent changes in housing patterns; the disintegration of extended family structures and traditional support networks and, as a result, a loss of traditional cultural pressures.

The empowerment of women and their access to the labour market, not to mention improved opportunities for academic and professional advancement are also important factors. Another cornerstone is the availability of medical advisory services and family health clinics, coupled with the incentive that government support might be available. Additional factors encompass the social and geographical differences between the classes.

The more similar they are in material and immaterial terms, the closer fertility rates become between the lower and the middle classes.

In Egypt, the state is not doing much to encourage a reduction in rates; perhaps the opposite. Mass media campaigns to raise awareness, which produced tangible results in the 1980s, have not been repeated, and public health services are getting worse.

The latest government report on the topic states a decline in the birth rate, especially in the provinces and on the periphery of the cities, but in some places health facilities have had to close because there are not enough doctors.

Organisations working in the social sector suffer from considerable problems and this also affects the area of education on reproductive health. The current regime is also waging a repressive campaign against women on several levels in the name of family values.

The gap between the classes has widened, large parts of the population are impoverished. This means that the majority of Egyptians remain excluded from the benefits of urbanisation and development.

At every level, the state does not seem to be exerting any effort to break the vicious cycle of poverty and high fertility. Rather, it is content with its narrative of turning “the people” into a population, by portraying them as a problem, dividing them and encouraging the blame game against the most vulnerable.

Shady Lewis Botros, publicist and psychologist, lives in London and works on the analysis of the psychological dimensions of political discourse in the Arab world.

Since President Abdul Fattah al-Sisi seized power in Egypt in 2013, he has ruled the country with an iron fist. Civil society, opposition and free press struggle to survive. Tens ... END_OF_DOCUMENT_TOKEN_TO_BE_REPLACED

The lack of grain supplies from Ukraine is forcing Egypt to act. Now even the Toshka project is being revived to grow grain in the desert. Birgit Svensson travelled to see it END_OF_DOCUMENT_TOKEN_TO_BE_REPLACED

In this unusually beautiful book of images and text, published in German and Arabic, artist Marianne Manda presents her own unique take on the megacity of Cairo. In over fifty ... END_OF_DOCUMENT_TOKEN_TO_BE_REPLACED

A stage, lights, a mesmerised audience: it looks like an Egyptian folkloric concert, but Umm Sameh is singing to heal the sick by driving out the demons that possess them END_OF_DOCUMENT_TOKEN_TO_BE_REPLACED
Author:
Shady Lewis Botros
Date:
Mail:
Send via mail

END_OF_DOCUMENT_TOKEN_TO_BE_REPLACED
Social media
and networks
Subscribe to our
newsletter