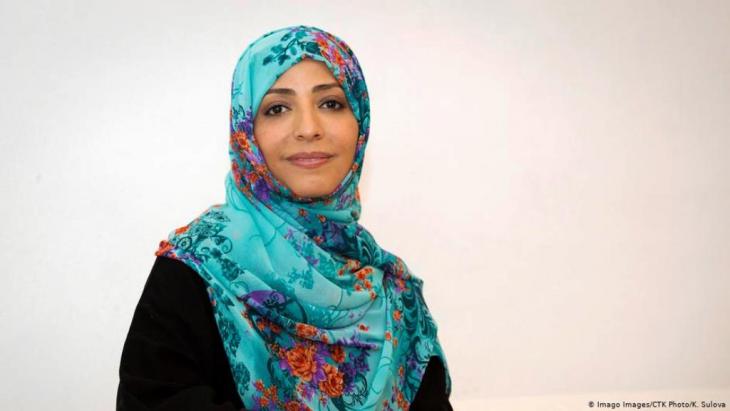 Yemeni human rights activist and winner of the 2011 Nobel Peace Prize Tawakkol Karman says she has been bullied and subjected to an ugly media campaign, after being named as one of 20 members of a new Facebook oversight board at the beginning of May.

The quasi-independent panel was set up to ensure compliance with the digital broadcaster's guidelines and values on its social media platforms and decide on thorny issues, such as what constitutes hate speech.

But the board has also been construed as having political influence, leading to accusations by some Arab media that Karman's alleged association with the Muslim Brotherhood, an influential group that advocates political Islam, would colour her decisions.

I’m proud of the diversity of Oversight Board Members For Facebook and Instagram, Our unique global perspectives across professional, cultural, political, and religious backgrounds and viewpoints are just as important as our work. pic.twitter.com/59RhcLIP96

On Monday, Karman wrote on Twitter that she hoped to be safe from the saw that was used to dismember the body of Jamal Khashoggi – a reference to the 2018 murder of the Saudi journalist, allegedly carried out at the behest of the highest levels of the Saudi state.

Tweets in English and Arabic directed at Karman have called her a "terrorist" and a "dog from Qatar", referring to the Gulf state considered sympathetic to the Muslim Brotherhood.

Media outlets in several authoritarian states across the region accused Karman of being close to the Brotherhood due to her former membership of the Saudi-backed Islah, an affiliate political party in Yemen.

Egypt considers the Muslim Brotherhood a terror organisation, and Saudi Arabia and the United Arab Emirates (UAE) see its members as rivals for regional supremacy and a threat to their rule.

Allowing Tawwakol Karman -who is known to be a member of Muslim Brotherhood terrorist organization- to be a member of @Facebook’s oversight board is a huge mistake. She’s biased and has always been serving extremist agenda!!#No_Tawakkol_Karman pic.twitter.com/sragwt9uFO

But Karman's Nobel Prize and her work defending freedom of expression and democracy, especially for women in the Arab world, makes her appointment "absolutely justified," said Gunter Meyer, head of the Center for Research on the Arab World at the University of Mainz. Her former membership of Islah, he added, was merely an excuse for such an attack.

In 2018, Karman was ejected from the party after speaking out against the UAE and Saudi Arabia's intervention in Yemen's war and the toll it had taken on the country's people. At that point Islah was attempting to mend ties with Saudi Arabia, Meyer added.

The rights activist has previously provoked the ire of a number of rulers across the region. In 2011 she took part in protests against Yemen's president at the time, Ali Abdullah Saleh, accusing him of stalling on democratic reforms, rampant corruption and human rights violations.

In 2018, Karman told Qatari outlet The New Arab that Saudi Arabia and the UAE sought "a very ugly occupation and even uglier influence" in Yemen and that those countries' rulers deserved to be brought before the International Criminal Court.

After the 2013 military ousting of Egypt's President Mohamed Morsi, a Brotherhood member, Karman told the BBC that the organisation and its followers, "who oppose military rule, will put the revolution back on the right path with their blood, determined steadfastness and faith."

That comment has been seized on by her critics in Egypt, with one Cairo-based lawyer demanding Facebook withdraw her appointment through an online petition on change.org.

But Meyer said her statement to the BBC was made in support of human rights. "Thousands of Muslim Brothers, who have been branded as terrorists across the board, are in detention, some of them without trial for years. Karman has publicly spoken up for them," he said.

Despite the campaign against her, she has also received messages of support.

Marc Owen Jones, a professor in Middle East Studies at Qatar's Hamad Bin Khalifa University, said the campaign against Karman was a "concerted operation to discredit her," which shows how seriously "regimes in those countries perceive social media."

That sentiment is echoed by Karman's fellow Yemeni journalist Samir al-Nimri: "The criticism of Tawakkol Karman mainly comes from the circle of regimes that stand against the aspirations of citizens." These regimes, he said, had led the "counterrevolutions" during the Arab Spring, bringing chaos and a "tragic war" to Yemen.

Home
Print
Newsletter
More on this topic
Interview with Nobel Peace Prize Laureate Tawakkol Karman: "We need to bring back the Arab Spring!"Turkeyʹs Middle East exiles: Istanbul – the Arab worldʹs beacon on the BosphorusA year to the day: The infamous murder of Jamal Khashoggi
Related Topics
Arab Spring, Arabellion, Democracy and civil society, Free speech and censorship, Freedom of the press, Media in the Arab World, Muslim Brotherhood, New media in the Muslim world
All Topics

Welcome to the world of Al Qasar, where Arabic music collides head-on with punk and psychedelic to create something powerful and beautiful. "Who Are We" is a raucous, subversive ... END_OF_DOCUMENT_TOKEN_TO_BE_REPLACED

Egyptian authorities have Mada Masr in their sights once again after critical reporting. But the editor of the country's last independent news source is adamant they will continue ... END_OF_DOCUMENT_TOKEN_TO_BE_REPLACED

Like Christianity, Europe's history is one of migration. Both have strong roots in the Orient and in cultures thousands of years old. Cultural historian Bernhard Braun invites us ... END_OF_DOCUMENT_TOKEN_TO_BE_REPLACED

When she ascended the throne, millions of Muslims still lived under British rule. Later, Elizabeth II appealed for tolerance in a multi-religious society. She was the first ... END_OF_DOCUMENT_TOKEN_TO_BE_REPLACED

END_OF_DOCUMENT_TOKEN_TO_BE_REPLACED
Social media
and networks
Subscribe to our
newsletter