In Punjab, people speak the same language, Punjabi, but in the beginning colleagues always asked me to call the other organisation to ask for something. They were visibly uncomfortable calling each other; this possibility simply didn't exist in their minds. I then organised a conference call for all of us via Skype – dropping out eventually, because without me they could talk in their native language, while with me they always had to speak English.

When I think of sports in India and Pakistan, I think of cricket rather than football. Why didn't you decide to do a cricket project? 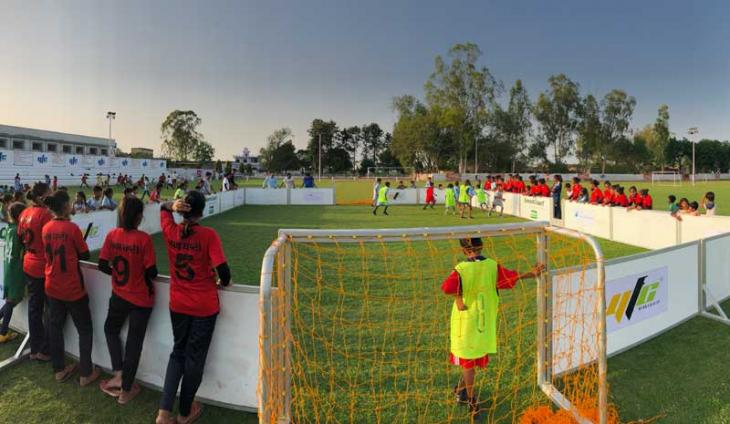 Clifton Grover, founder of "Kick for Tolerance": “thanks to street football, they now have something in common that they identify with, because they're all street footballers, regardless which country they live in”

Moreover, in the region cricket is a men's sport, almost a macho sport. And the technical equipment is more complicated than in football, where you just have to throw a ball in the air and off you go. For all these reasons, cricket wouldn't have been as good as football. Of course football also has negative associations: it has an equally commercialised market and releases a lot of energy that isn't always positive.

Personally, I associate football with violent fans and emotions boiling over ...

Grover: Yes and with winning and losing and defeating the opponent. For example, our children love imitating the winner pose. You don't have to think that's good.

How do you deal with such situations?

Grover: All this winning and being defeated, violence, national pride and macho behaviour has no place in street football, or is deliberately exposed and scrutinised there. On our approach, everyone is a winner in the end. Sounds boring to some? Well, it's not – quite the contrary.

Dozens of academics, writers and civic activists have been arrested in India on charges of sedition, terrorism and inciting violence. Sruti Bala asks why a country that sees ... END_OF_DOCUMENT_TOKEN_TO_BE_REPLACED

You might expect the advent of a long, bleak winter to bring everything to a standstill in Kashmir, but thanks to ingenious portable earthenware heating pots – kangdi – encased in ... END_OF_DOCUMENT_TOKEN_TO_BE_REPLACED

Illegal construction, timber smuggling and a decades-long conflict have left their mark on the forests of Kashmir. But locals are stepping in to protect the unique nature of their ... END_OF_DOCUMENT_TOKEN_TO_BE_REPLACED

Lacking support from Arab countries for its stance on the Kashmir dispute, Pakistan is looking for new alliances under China's leadership. How practical is it for Islamabad to ... END_OF_DOCUMENT_TOKEN_TO_BE_REPLACED

Blending East African, Bollywood and Arab music traditions, Groupe RTD's "The Dancing Devils of Djibouti" is not only a stunning album, it is also the first internationally- ... END_OF_DOCUMENT_TOKEN_TO_BE_REPLACED
Author:
Siri Gogelmann
Date:
Mail:
Send via mail

END_OF_DOCUMENT_TOKEN_TO_BE_REPLACED
Social media
and networks
Subscribe to our
newsletter