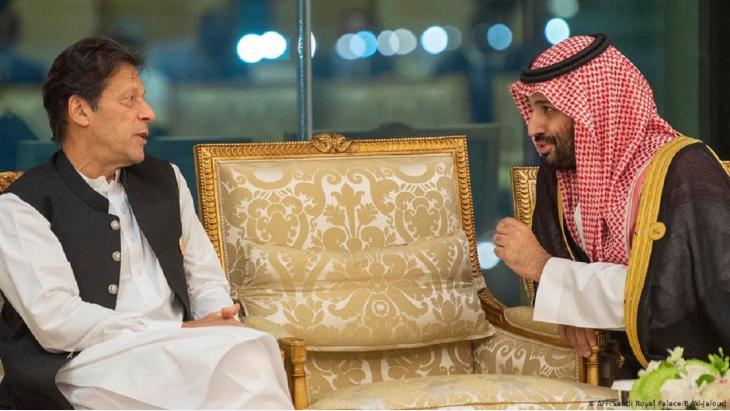 Lacking support from Arab countries for its stance on the Kashmir dispute, Pakistan is looking for new alliances under China's leadership. How practical is it for Islamabad to pursue its new foreign policy? By Haroon Janjua

At the beginning of August, Pakistani Foreign Minister Shah Mahmood Qureshi blasted the 57-member Organisation of Islamic Cooperation, accusing the OIC of failing to support his country's stance on Kashmir. Qureshi's comments infuriated officials in Saudi Arabia, which plays a key role in the OIC's affairs and froze a $3.2 billion (€2.72 billion) oil credit facility and demanded that Pakistan repay part of a $3 billion loan, according to the Financial Times newspaper.

"I am once again respectfully telling the OIC that a meeting of the Council of Foreign Ministers is our expectation. If you cannot convene it, then I'll be compelled to ask Prime Minister Imran Khan to call a meeting of the Islamic countries that are ready to stand with us on the issue of Kashmir and support the oppressed Kashmiris," Qureshi told a broadcaster in Pakistan. "We have our own sensitivities. You have to realise this. Gulf countries should understand this," the foreign minister said.

Later, Qureshi laid out a four-point strategy for the Kashmir issue, which entailed "confronting, exposing and pushing back against New Delhi's intentions; deterring it through military preparedness, conflict resolution and confidence-building; not being distracted by India's actions; and continuing with regional integration projects through participation in the China-Pakistan Economic Corridor, the Shanghai Cooperation Organisation, and the Economic Cooperation Organisation." 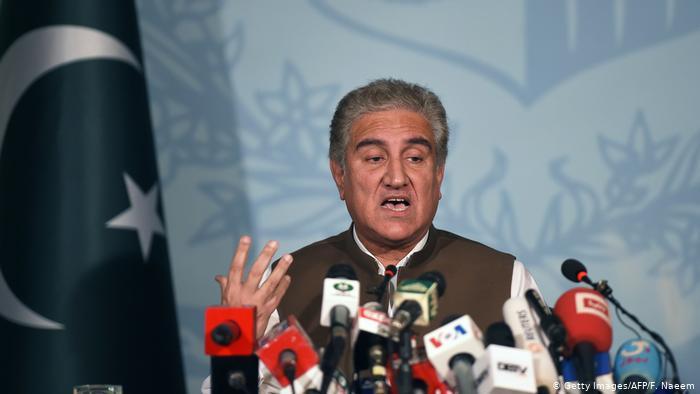 Pakistan's plan for Kashmir: the four points entail "confronting, exposing and pushing back against New Delhi's intentions; deterring it through military preparedness, conflict resolution and confidence-building; not being distracted by India's actions; and continuing with regional integration projects through participation in the China-Pakistan Economic Corridor, the Shanghai Cooperation Organisation, and the Economic Cooperation Organisation"

The diplomatic row with Saudi Arabia prompted Khan's government to send Army Chief General Qamar Bajwa to Riyadh. "The army chief's visit is being viewed in the context of Foreign Minister Shah Mahmood Qureshi's criticism of the Saudi Arabia-dominated Organisation of Islamic Cooperation," according to the Dawn newspaper.

You may also like: Middle East economies – Treading the trade war tightrope

What exactly is Pakistan's plan regarding Kashmir?

Last year, Indian Prime Minister Narendra Modi ended the special constitutional status of the Indian state Jammu and Kashmir (J&K). The region's autonomy and its own constitution, as well as its special rights for permanent residents, the majority of whom are Muslims, were abolished. Furthermore, the parliament in New Delhi passed a bill to split Jammu and Kashmir into two union territories – J&K and Ladakh – which would be directly administered by New Delhi.

Modi said the move was aimed at ending separatism and remove terrorists from Kashmir. He said that Article 370 was being used as a weapon of terror and that the people of the region were missing out on key laws and protections afforded to people in the rest of India.

Since 1989, Muslim insurgents have been fighting Indian forces in the Indian-administered part of Kashmir – a region of 12 million people, about 70% of whom are Muslim. India and Pakistan have fought two of their three wars since independence in 1947 over Kashmir, which they both claim in full but rule in part.

Islamabad condemned New Delhi's move to abrogate Kashmir's special status and urged its allies in the Muslim world to act against India. Experts say it has so far failed to get much support for its Kashmir stance.

"Islamabad wants to push back against the well-founded criticism that Pakistan doesn't really have a plan on Kashmir. It has been waging an international diplomatic offensive over the last year, but this effort – which is not exactly a new thing for a country that has long sought to push the Kashmir issue in global forums – has not garnered the results Islamabad has wanted," said Michael Kugelman, a South Asia expert at the Washington-based Woodrow Wilson Center for Scholars.

"And that leads to a natural question: if the international diplomatic campaign doesn't pay off, then what's the second plan," Kugelman added.

Experts also say that Pakistan's foreign policy on Kashmir and India lacks clarity, and the country's recent measures, such as the unveiling of a new map showing the entire disputed region of Jammu and Kashmir as its territory, are only meant for domestic consumption.

"The situation needs aggressive diplomacy. Apart from China, Malaysia and Turkey, no other country supports Islamabad on Kashmir," Raja Qaiser Ahmed, an assistant professor of International Relations at Quaid-e-Azam University, Islamabad, pointed out.

Vali Nasr, an international affairs professor at Johns Hopkins University, agreed that Riyadh is unlikely to take measures against India over New Delhi's Kashmir policy. "Saudi Arabia sees India as an important trading partner. It would prefer to have ties to both India and Pakistan, but is clearly no longer willing to support Pakistan [on the Kashmir issue]. The manner with which it is punishing Pakistan also reflects the fact that Islamabad has little leverage with Riyadh," Nasr said.

You may also like: India and Pakistan – "If Germany can be reunified, so can Kashmir"

In the absence of support from powerful Arab nations, Pakistan is looking to strengthen ties with other powers.

"Pakistan's increasing outreach to Iran, Malaysia, and Turkey – and more broadly to Russia, as deepening U.S.-India partnership is reducing the scope of Russia-India ties – is a space to watch in the coming months," said Kugelman. "I don't think we should overstate the damage to Pakistan's relations with Saudi Arabia, but that dust-up does suggest that a new foreign policy framework is taking shape that reasserts Pakistan's deep ties with Beijing, while scaling up ties with Russia and with Muslim-majority states outside of the Arab Gulf," he added.

Amid these changing regional dynamics, Pakistan's Foreign Minister Qureshi recently paid a flying visit to China, which he dubbed "very important" to deepen the strategic partnership between the two countries.

"The visit aims to project Pakistan's political and military leadership's vision," Qureshi said in a video message before leaving for China.

Experts say that Pakistan wants to play a key role in the emerging China-led alliance, which could possibly include Iran as well.

"In the past, Islamabad tried to get closer to China, Russia and some Southeast Asian states, but except China, no-one pushed India to change its position on Kashmir. Pakistan should keep in mind that having close relations with a state does not guarantee consensus on all international disputes," according to Ahmed.

It remains to be seen whether Islamabad's desire to be part of new regional alliances yields the desired outcome, leading to a permanent solution of its long dispute with India. At the same time, Pakistan may well be risking further diplomatic isolation by angering Saudi Arabia and its other Gulf allies.

Chinese President Xi Jinping's visit to Saudi Arabia in December 2022 may have rattled Washington, but it simply highlighted the Arabs’ desire to diversify their foreign relations ... END_OF_DOCUMENT_TOKEN_TO_BE_REPLACED

Iran has withdrawn its participation in the Frankfurt Book Fair, accusing the event of meddling in the country's domestic affairs. Organisers have denied the accusation. By ... END_OF_DOCUMENT_TOKEN_TO_BE_REPLACED

Analyst Iyad El-Baghdadi examines the ongoing tensions between the United States and the two Gulf states – Saudi Arabia and the UAE – and their geopolitical implications in ... END_OF_DOCUMENT_TOKEN_TO_BE_REPLACED

From the Euphrates to the Mekong, dams that ensure one country's water supply risk leaving others parched. But shared water resources can be a source of peace as well as conflict ... END_OF_DOCUMENT_TOKEN_TO_BE_REPLACED

For over fifty years, British photographer Peter Sanders travelled across the Middle East and further afield, seeking out the saints of Islam. His work uncovers a little-known ... END_OF_DOCUMENT_TOKEN_TO_BE_REPLACED
Author:
Haroon Janjua
Date:
Mail:
Send via mail

END_OF_DOCUMENT_TOKEN_TO_BE_REPLACED
Social media
and networks
Subscribe to our
newsletter