Time to Turn around Worrisome Trends in Pakistan

In his essay, Muqtedar Khan comments on Pakistan's blasphemy law and those who advocate and invoke them, arguing that such laws have no place in Islam and are often abused by Muslims seeking to exact revenge on religious minorities and fellow Muslims

In his essay, Dr Muqtedar Khan comments on Pakistan's blasphemy law and those who advocate and invoke them, arguing that such laws have no place in Islam and are often abused by Muslims seeking to exact revenge on religious minorities and fellow Muslims 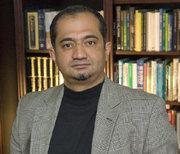 "The Koran says that God sent Muhammad as a mercy to all of humanity," writes Muqtedar Khan. "The most important and oft-emphasised attribute of God in the Koran is rahmah, or mercy."

​​Once again the viciousness that haunts Muslim communities has manifested itself in the form of a brutal assassination, this time the assassination of the Pakistani Provincial Governor Salman Taseer on 4 January. The assassin, Taseer's bodyguard, claimed that he killed Taseer because the governor was opposed to Pakistan's blasphemy law. The assassination of Taseer will surely silence many moderate voices and further intimidate the government.

The latest crisis began when a Christian Pakistani woman, Aasia Noreen, was accused of blasphemy, with witnesses claiming she insulted the Prophet Muhammad. A court in Pakistan, invoking the nation's blasphemy law, sentenced Noreen to death. Taseer, who was publicly seeking a pardon for Noreen, came under threat from some religious leaders for doing so and for standing up for other minorities like the Ahmadis, a Muslim denomination which is often persecuted for its unorthodox beliefs.

Last week, thousands of people, instigated by religious parties and imams, took to the streets to demand that Noreen be executed. And though human rights activists and many Muslim scholars have come out and condemned this development, the government is afraid to pardon her and repeal the law, especially after the killing of Taseer last week.

Misuse of the blasphemy law

Two issues are once again highlighted by this episode. First is the issue of capital punishment for crimes of speech and thought labelled as blasphemy, a punishment that runs counter to the Islamic ideals of compassion and mercy. In many cases, the blasphemy law is misused by Muslims to exact revenge against religious minorities and other fellow Muslims by falsely accusing them of blasphemy. The frequency and blatancy with which these laws are abused are justification enough for their repeal.

These laws, though created in the name of Islam, really have no place in Islam and hardly any Muslim-majority country applies them. Pakistan is a rare exception. Religious clerics often use it to gain quick fame and popularity amongst their followers at the expense of defenceless people like Noreen. 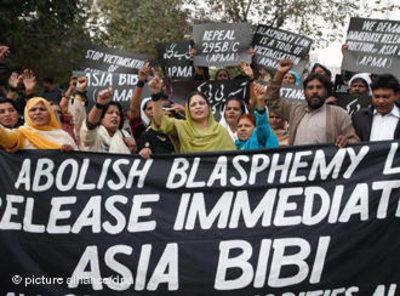 Supporters of the All Pakistan Minority Alliance (APMA) protest against Pakistan's blasphemy law and call for the release of Asia Bibi, a Pakistani Christian minority women, who was sentenced to death by a local court for blasphemy

​​The second issue is the increasingly worrisome trend in some Muslim communities of labelling as inauthentic any hadith (actions or sayings of the Prophet Muhammad) in which tolerance, compassion or mercy is shown, while those few in which murder and violence is advocated, albeit in a specific context, are the only ones considered authentic. Some Muslims even react with disbelief and immediately demand the source when any story about the Prophet Muhammad's compassion is mentioned. It seems that for some of us, compassion and mercy have become un-Islamic virtues.

Throughout his life, the Prophet Muhammad was insulted by his enemies, but never did he order them killed to avenge every insult. Indeed, the Koran even tells of such instances and does not call for the death of those aggressors.

Stories such as the above, which emphasise Prophet Muhammad's compassion and mercy, are part of Muslim folklore, music, children's stories and kitchen table conversations.

Mumtaz Qadri, who is accused of assassinating Punjab's governor, Salman Taseer, claimed he did so because the governor was opposed to Pakistan's blasphemy law

​​The most important and oft-emphasised attribute of God in the Koran is rahmah, or mercy, and given the uncertainty surrounding the authenticity of many hadiths, I hope that Muslims become more responsive and open to those that advocate mercy, compassion and tolerance, and critical of those that encourage violence, murder and hate. After all, tolerance and compassion can have no disastrous consequences; it is hate and violence that often trigger unending cycles of the same.

The Koran says that God sent Muhammad as a mercy to all of humanity. How can we convince Aasia Noreen in Pakistan that this is indeed true?

Dr Muqtedar Khan is Associate Professor at the University of Delaware and a Fellow of the Institute for Social Policy and Understanding.

Interview with Franz Magnis-Suseno
"Freedom of Religion Must Also Apply to Minorities"
Franz Magnis-Suseno is a German-born Jesuit Priest and professor of philosophy in Indonesia. In this interview with Anett Keller, the naturalised Indonesian citizen talks about Indonesia's anti-pornography law, religious tolerance, and the definition of blasphemy

Christianity and Blasphemy
The Right to Slander God?
"Yes, one has a right to caricature God" – so read the headlines of France Soir, one of the first European newspapers to follow the Danish cue and print the controversial caricatures. But this right is rather new, writes Ann Kathrin-Gässlein

END_OF_DOCUMENT_TOKEN_TO_BE_REPLACED
Social media
and networks
Subscribe to our
newsletter