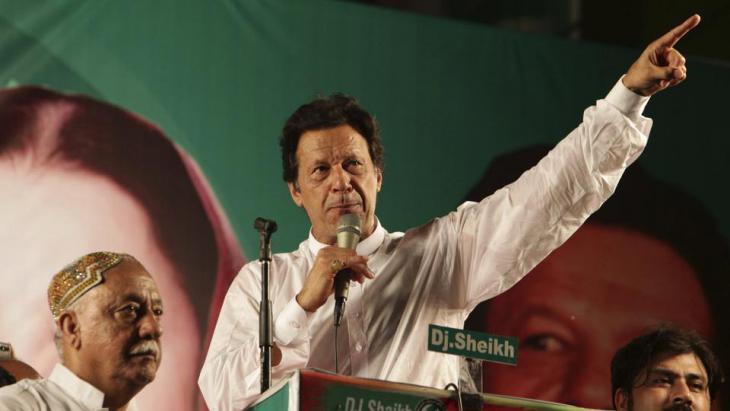 Pakistanis long for peace and prosperity – and they are fed up of their archaic establishment. In three different elections, they have voted three different parties into power. Military rule ended when Pervez Musharraf resigned as president in 2008. Shortly before the general election in the same year, Benazir Bhutto was assassinated; her Pakistan Peopleʹs Party (PPP), however, romped home on a sympathy vote. Five years later, voters kicked the PPP out and Nawaz Sharif of the PMLN (Pakistan Muslim League – Nawaz) became prime minister.

Many people now hope that Imran Khan will deliver the peaceful and productive future that neither the PPP nor the PMLN have managed to bring about. The PPP remains dominated by the Bhutto clan and the PMLN by the Sharif family. Both are embroiled in multiple cases of corruption. Whether the PTI will prove to be different remains to be seen.

Khan is a former cricket star. Led by him, Pakistanʹs team won the world cup in 1992. He became politicised after retirement and raised his profile through philanthropy. Casting off his former playboy image, Khan has since cultivated his political profile as a God-fearing Muslim. A senior analyst calls him a "flamboyant icon of the past" who has emerged has an "engaging politician".

A modest existence rather than pomp and circumstance

Khanʹs first TV address to the nation focused on austerity and accountability. He pledged to reside in a small three-bedroom house and turn the palatial prime ministerial residence in Islamabad into a university. He said he needs only two servants, whereas 500 were formerly engaged for the upkeep of the luxurious PM House.

In a speech following his election victory Khan spent 70 minutes addressing many issues of public concern. He spoke of employment, education, agriculture, water, healthcare and the environment. He mentioned inflation as well as the budget and current account deficits, but he shied away from the most controversial economic policy issue. He did not make a commitment on whether he will or will not turn to the International Monetary Fund (IMF) for a bail-out.

Pakistanʹs exchange rate has nosedived recently and the countryʹs foreign-exchange reserves are dwindling. A crisis is brewing. During the campaign, Khan promised to create an “Islamic welfare state”, but the country lacks the revenue for major investments in social services. 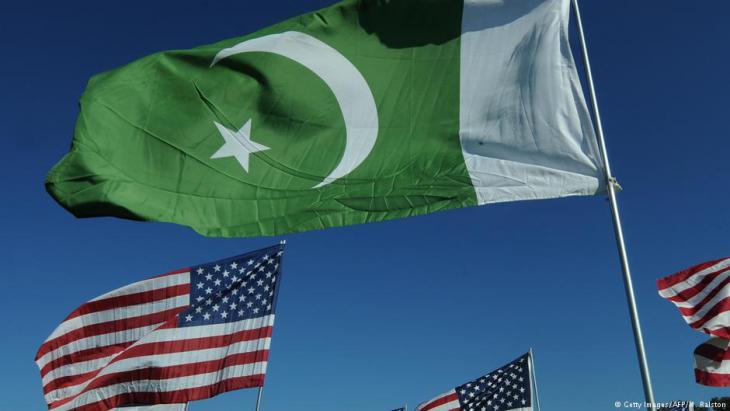 On a collision course with the newly elected government in Islamabad: out of dissatisfaction with the fight against Islamic terrorist groups, the Trump administration has cut essential military aid to Pakistan – the agreed sum of 300 million U.S. dollars will not be paid out. The reason? Pakistan had failed to take "decisive action" against insurgents. The move constitutes a heavy blow for Imran Khanʹs newly elected government, which is already facing a severe economic crisis and is likely to have to seek support from the International Monetary Fund if the country is to remain solvent

He mentioned the China-Pakistan Economic Corridor (CPEC), in the context of which Beijing has granted Pakistan huge loans. Unlike former prime ministers, he did not seem too excited about Chinaʹs engagement. Yet he still passed no comment on how he will handle the CPEC-induced debt burden.

The third corner of a "trouble triangle"

Khan announced he will make the government lean and clean. Whistle-blowers in the public service – especially in revenue collection – are not only to get legal protection. Khan said he will design an incentive package to motivate them.

Another important topic Khan failed to mention was the Islamist militants who have claimed thousands of lives in the past two decades. His approach to foreign affairs also remains unclear, preferring to play it safe and merely express the hope of being on good terms with all Pakistanʹs neighbours.

Having been disappointed by previous governments, people are hoping that Khan will prove better. There are however doubts. One observer says that the world is becoming increasingly unpredictable and alarming. The misdirection of populist sentiments has given rise to Narendra Modi in India and Donald Trump in the USA. He regards Khan as the third corner of a "trouble triangle".

This observer voted for the PMLN because the Sharifs took on the military establishment. In contrast, Khanʹs campaign found support in military circles.

One business leader said that he would wait for three months "before giving Khan his unconditional support". His decision will depend on what the new prime minister does to weed out corruption and make business easier.

According to an expert from the Pakistan Business Council, a private think tank, the crucial issue is how the PTI government will handle the balance-of-payment problems. If that goes well, he is confident that the economy can grow at a sustained rate of seven percent annually. Unfortunately, that is quite a big "if".

Many marriages to British Asian men are accompanied by false promises of improved finances. Later when the men abandon their wives to return to the UK, some brides' families find ... END_OF_DOCUMENT_TOKEN_TO_BE_REPLACED

India is not alone in feeling great sadness today over the death of renowned Reuters photojournalist Danish Siddiqui. He was killed in Afghanistan during clashes between Afghan ... END_OF_DOCUMENT_TOKEN_TO_BE_REPLACED

I regret very much that I worked for the Bundeswehr. If the Taliban knock on my door, I hope they shoot me right away. Guest article by Ahmad Jawid Sultani END_OF_DOCUMENT_TOKEN_TO_BE_REPLACED

The West is pulling out of Afghanistan after 20 years, but the conflict remains – and the Taliban are stronger than they have been for a long time. And now? The renowned Taliban ... END_OF_DOCUMENT_TOKEN_TO_BE_REPLACED

United States and NATO troops are leaving Afghanistan after 20 years, despite the fact that the Taliban is still advancing. The German Bundeswehr is already out. Sandra Petersmann ... END_OF_DOCUMENT_TOKEN_TO_BE_REPLACED

Over the years, the relationship between arch-rivals India and Pakistan has been shaped by conflict and confrontation. For some time now, however, both countries have been singing ... END_OF_DOCUMENT_TOKEN_TO_BE_REPLACED
Author:
Afshan Subohi
Date:
Mail:
Send via mail

END_OF_DOCUMENT_TOKEN_TO_BE_REPLACED
Social media
and networks
Subscribe to our
newsletter