Farzana draws all eyes when she dances, with the twist of her hips and hair – but today she is above all the voice of a Pakistani community with an ambiguous status: the khawajasiras.

The 30-year-old is a guru, a matriarch at the head of a "family" of several hundred khawajasiras, an umbrella term in Pakistan denoting a third sex that includes transsexuals, transvestites and eunuchs.

She is co-founder and president of TransAction, a rights organisation launched in 2015 in Peshawar, capital of deeply conservative Khyber Pakhtunkhwa (KP) province. Faced with brutal aggression and daily humiliation, this solid Pashtun, whose hoarse voice betrays her birth sex, "filed complaints in almost every KP police station" – but in vain.

"More than 50 khawajasiras were killed in 2015 and 2016 in KP alone," she says, recounting with fatalistic calm how she was repeatedly raped and blackmailed by police.

The status of khawajasiras – also known as hijras – is opaque in Pakistan to say the least. Modern-day Pakistani transgender people claim to be cultural heirs of the eunuchs who thrived at the courts of the Mughal emperors that ruled the Indian subcontinent for two centuries until the British arrived in the 19th century and banned them.

Later, Pakistan became one of the first countries in the world to legally recognise a third sex. They number at least half a million people in the country, according to several studies – up to two million, say TransAction.

Since 2009, they have been able to obtain an identity card as "khawajasiras" and several have run in elections. A Lahore court has ruled they should be counted in the next census, set to be held this year.

Like Farzana, many earn their living by being called upon for rituals such as blessing newborns or to bring life to weddings and parties as dancers – and, sometimes, in more clandestine ways. But despite these signs of integration they live daily as pariahs, often reduced to begging and prostitution, subjected to extortion and discrimination.

The catalyst for TransAction's mobilisation in Peshawar was the exclusion of transgenders from aid to populations fleeing Talibanisation and fighting in the tribal areas on the border with Afghanistan.

Sohana, 24, fled in 2008 from   Kurram tribal district, where the Taliban had banished dancing and music and forced men to grow beards.

But in Peshawar, the UN helped only displaced families.

"We had no help from anyone... We started protesting," says the young woman, concealing beneath her shawl the curves she has created with silicone implants. "Many people spoke out, saying that people like us also need to have our rights respected," says Sohana, who nevertheless despairs of ever being tolerated by her family.

Dancing for a better life: transgender people in Pakistan

Life is anything but easy for "hijras" (transgender people) in Pakistan, where men dressed in women's clothes are still considered an affront. Hijras identify themselves as third gender individuals. Photographers Muhammed Muheisen and Shakil Adils' photographs provide a fascinating insight into their everyday lives. By Monika Griebeler 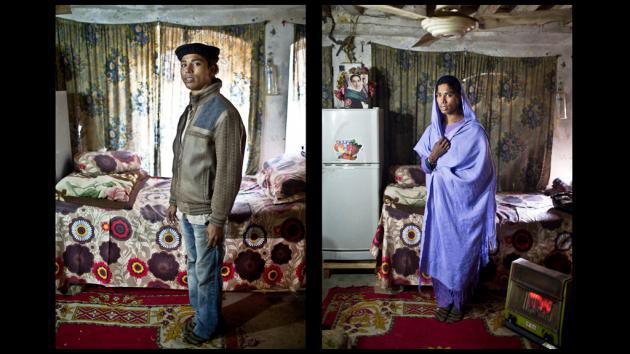 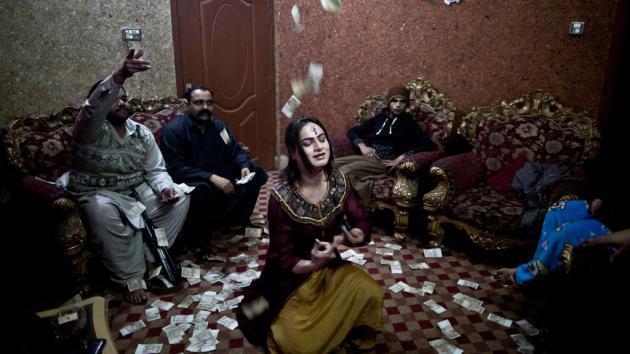 When night falls in the city of Rawalpindi, Waseem starts to dance. The 27-year-old performs as a "hijra", the third gender. Estimates suggest that there are up to 800,000 transgender people in Pakistan. They are especially popular as dancers at weddings and other such events because their prayers are deemed very effective. However, these are the only occasions where they are truly accepted. 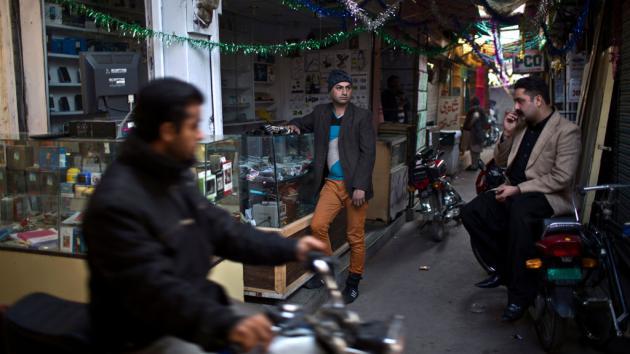 By day, Waseem sells mobile phone accessories. By night, he is a female party dancer. This is not without its risks. For this reason, most of his colleagues and friends are not aware of what he does in the evenings. 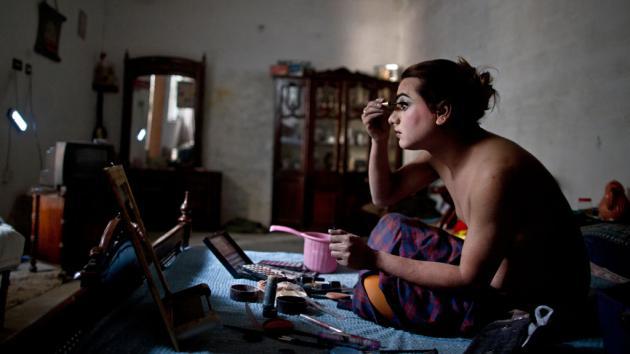 Waseem transforming into Rani. For Waseem, leading this double life is a way of achieving a better life: "Being a dancer helps me to earn much more money than working in a shop," he says. For true hijras, life is a constant fight. In many cases, those who can't work as dancers drift into prostitution. All of them – Waseem included – face harassment and abuse. 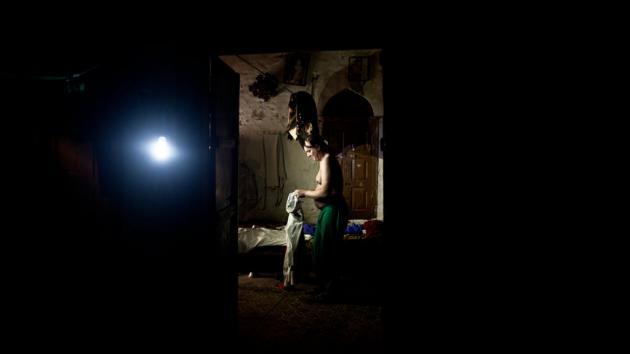 Many devout Muslims hate these "creatures between men and women". Radical Islamists openly attack them in public. That's why the hijras shy away from the world, preferring to remain within their close-knit community. "Eyes follow me when I walk out of the apartment," says 43-year-old Bakhtawar. "Being with other dancers is like being with a family. When I am surrounded by them, I feel safe, respected and empowered". 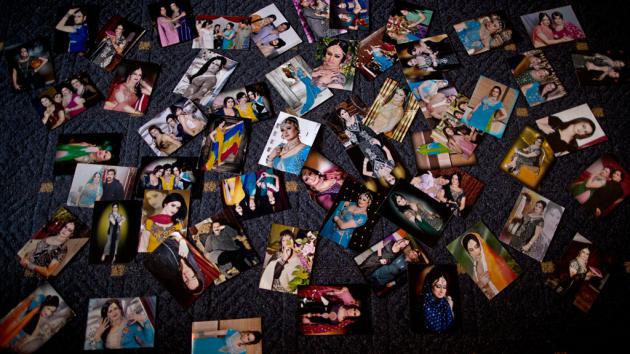 The way they like to see themselves: many hijras prefer to flee these stares to the anonymity of a big city, keeping their true selves from colleagues or family, even though Pakistani law is rather progressive in this regard: in 2011, a Supreme Court ruling officially recognised the third gender. Hijras can now have this gender indicated in their passports, are allowed to vote, open bank accounts and work legally – helping some get away from prostitution. 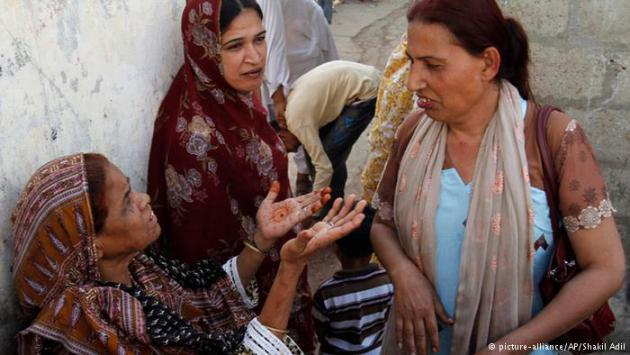 For the first time, transgender people like Bindiya Rana (pictured on the right) ran for the country's parliament in the 2013 elections. Although not elected, Rana and the NGO in which she works continue to fight for equality and an end to discrimination. After all, new laws do not automatically bring about a major change in the public mindset in conservative Pakistan. 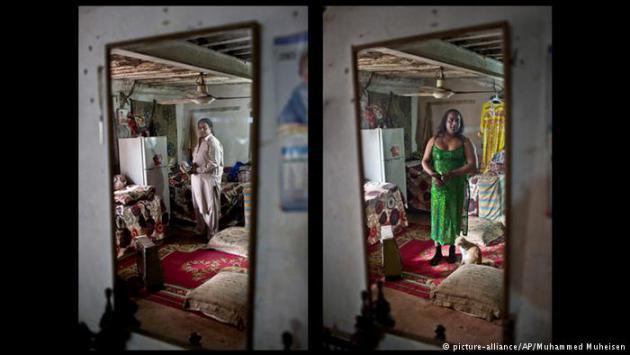 Leading a double life: even today, only few transgender people openly present their identity with as much pride as 44-year-old Amjad, who says: "The only thing that I can't do as a woman is conceive babies".

TransAction now has 40,000 followers on its Facebook page and local newspapers have become sympathetic in their coverage of hijras, reviving the debate on their status in Pakistan.

"A lot of NGOs have worked with the transgender community, but mostly focused on HIV, whereas (TransAction's) priority was protection from violence, harassment, attacks and extortion," said Qamar Naseem, a women's rights activist who helped TransAction to be heard.

Perhaps the most famous case to be highlighted was that of Alisha, who died after an assault in May last year because, her supporters said, she did not receive treatment at the gender-segregated hospital in Peshawar in time due to her identity.

Against all odds, conservative and Islamist lawmakers are sensitive to their cause.

"They are a creature of God. Allah's creation. They should have their rights, as we have," said conservative MP Amina Sardar, who spearheaded legislation supporting political franchise for khawajasiras.

"This is what I preach. Hijras are Muslim, same human beings (as us), with the same rights," said Mullah Tayyab Qureshi, imam of the main Peshawar mosque.

Several support measures have already been voted in and KP is working on a transgender protection program which, if passed, will become the second adopted by a province in South Asia, Nasim said.

But access to education and employment is a major challenge for these women. Most khawajasiras say they have been abandoned or bullied to the point of fleeing their families, often as they approach adolescence, when their effeminate behaviour becomes intolerable in a patriarchal society where homosexuality is illegal.

The community is also weakened by the practices of some so-called "gurus" who act as merciless pimps, exploiting disoriented young people instead of behaving as the protective adoptive mothers most pride themselves on being.

Paro, who left her parents and school aged 11, was prostituted, raped and shot before joining TransAction.

"I've liked dancing since I was a child, but nobody respects that," she sighs.

She cut down on her dance performances and launched a small embroidery business after the killing of her friend Alisha. In her sweet pink room, she creates flamboyant outfits for other hijras. On the wall, two screens: one broadcasts music clips, but the other is the video surveillance she installed in front of her door – six TransAction leaders have been assaulted because of their activism.    (AFP)

Interview with LGBT Rights Activist Arsham Parsi: "Rights are never given; we have to fight for them''

END_OF_DOCUMENT_TOKEN_TO_BE_REPLACED
Social media
and networks
Subscribe to our
newsletter