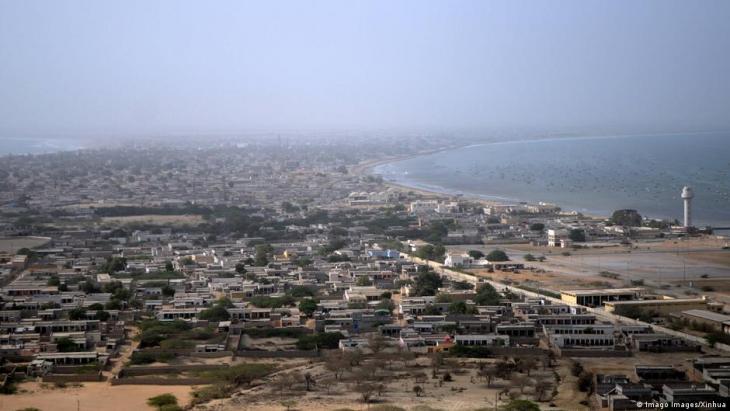 Attacks by separatist groups in Balochistan, Pakistan's largest province, have increased recently. Mohammad Luqman looks into what is driving the flare-up in this frequently overlooked region

Almost unnoticed by the international press, two coordinated attacks were carried out on Pakistan army military posts in the southwestern province of Balochistan a few weeks ago. A Baloch separatist group claimed responsibility for the act a short time later. What surprised observers was the quality of weaponry carried by the militants and the extent of their military expertise. Although various armed groups have been at odds with the central government for many years, the latest attacks have taken things to a completely new level.

Balochistan is both Pakistan's largest and its most sparsely populated province. The north of the region with its capital Quetta is predominantly inhabited by Pashtuns and is far more developed than the rural south. The inaccessible mountains and deserts of Balochistan are home to Baloch tribes who have lived according to their own traditions for centuries.  Even today, the word of the tribal leaders – the sardars – carries more weight than many a state authority. They rule over their tribespeople like feudal lords. Occasionally internal conflicts are still settled using archaic tribal law, the riwaj or Baloch mayar.

In exchange for cooperating with the state, the sardars are allowed to assume their traditional role. Moreover, they also receive royalties from the extraction of resources on their tribal lands. This type of indirect rule is a throwback to colonial times. Balochistan was incorporated into British India relatively late (1870). Managing such an inaccessible region was dependent on the tribal leaders who, in return for their loyalty, were given relative autonomy over tribal affairs. Following independence, the new state of Pakistan simply incorporated these colonial structures.

Pending the final partition of India, the largest Balochistan principality, Kalaat, was initially reluctant to join Pakistan. Ultimately the prince did agree, following some tough negotiations. Yet, the climbdown led to strife within his family, with his brother leading a vain attempt at armed rebellion. 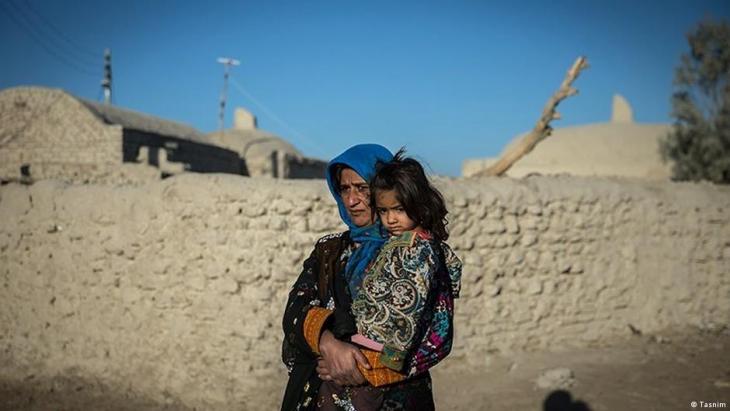 A meagre existence: after more than 70 years of independence, Balochistan is still severely underdeveloped. Lack of infrastructure, poor education and health services, as well as a strong sense of their own marginalisation, has generated considerable resentment among the population. Much of the profits generated by raw material extraction are siphoned off by multinational companies, the sardars or central government, while the majority of Balochs continue to live in poverty

After more than 70 years of independence, Balochistan is still severely underdeveloped. Lack of infrastructure, poor education and health services, as well as a strong sense of their own marginalisation, has generated considerable resentment among the population. Much of the profits generated by raw material extraction are siphoned off by multinational companies, the sardars or central government, while the majority of Balochs continue to live in poverty.

Against this background, calls for more rights and autonomy have been audible for decades. Although there were pockets of isolated resistance prior to the millennium, the conflict with central government saw major escalation during the 2000s. Prominent sardar, politician and ex-governor of Balochistan Nawab Akbar Khan Bugti mounted a rebellion against the military government of Pervez Musharraf. In the ensuing military offensive by Islamabad, the popular 79-year-old tribal leader was killed in his mountain hideout. Bugti's death exacerbated the situation. The 2000s saw the emergence of other armed groups who carried out attacks on the army from their mountain hideouts. The government responded with further repressive measures. Political activists and those critical of the administration mysteriously disappeared, or their bodies reappeared under unexplained circumstances. People were quick to blame the security forces. To this day, the issue of missing persons remains one of Balochistan's central problems.

For its part, the Pakistani establishment accused the Afghan and Indian governments of harbouring the separatists and supporting them to destabilise Pakistan. Following the Pakistani military offensives, some of the rebels did indeed leave for Afghanistan or ask India for support. Since the Taliban's return to power in 2021, activity by Baloch separatists, who continue to use Afghanistan as a retreat, has increased.

On Balochistan's western border with Iran, another conflict has been simmering for many years. A number of Islamist terrorist groups have taken root there, repeatedly carrying out attacks on Iranian security forces or Shia pilgrims. Iran has long demanded that Islamabad take tougher action against these organisations, which has repeatedly led to diplomatic tensions between the two countries. Meanwhile, the inaccessible mountains and deserts make it difficult to monitor the border. In an ambitious project, a border fence is now being built between the two countries. A few days ago, both sides also agreed on better coordination to secure the border. Stronger surveillance could also make it more difficult to illegally smuggle fuel and other goods from Iran. 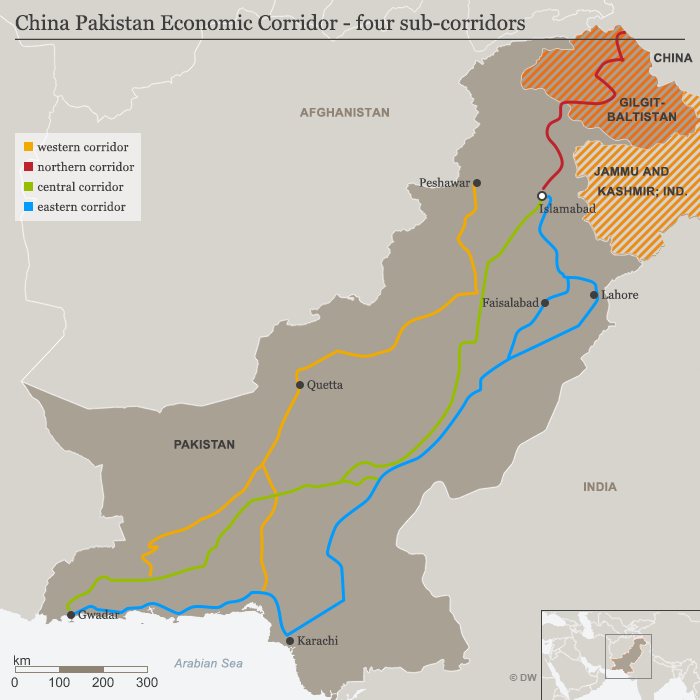 When the China-Pakistan Economic Corridor was agreed in 2013, there was an outcry in Balochistan. Separatists view the Chinese investments with suspicion and accuse Beijing of wanting to exploit the province's raw materials without benefitting the people of Balochistan. Balochistan (in the western part of the country) is Pakistan's largest province in terms of area and also its least populous, and is rich in precious metals such as copper and gold. Nevertheless, the province is one of the least developed regions in southeast Asia

Since 2002, when China noticed Gawadar's potential, Balochistan has been making international economic headlines. Chinese companies built Pakistan's first deep-sea port there in 2006, and in 2013 Islamabad signed the China-Pakistan Economic Corridor (CPEC), which will connect the two countries through an improved road and rail network extending through to the port of Gawadar. In this way, Beijing hopes to gain access to the Arabian Sea, while Islamabad is hopeful of more foreign currency. In record time, the government pushed the development of this small fishing village, with little involvement of the local population. Despite the modern port, the old neighbourhoods still lack drinking water or electricity.

Military checkpoints, erected after attacks by Baloch nationalists, further complicate the daily lives of Gawadar locals. Recently, major real estate entrepreneurs and developers have set their sights on the town. They are luring potential investors from all over Pakistan with the promise of newly planned housing societies and luxury flats in prominent locations. In late 2021, frustration erupted in one of the biggest protests the town has yet seen. For weeks, demonstrators blocked a main road until their demands were heard. A central demand of the protests was for the government to take decisive action against illegal fishing by Chinese trawlers. Fishing is a major source of income for the city's inhabitants and foreign trawlers threaten this livelihood.

Gawadar exemplifies the complex problems of Balochistan. Despite the government's frequent assertions that it wants to take the concerns of the population seriously, many feel that rapid development is being driven forward at their expense.

Ultimately, peace and long-term stability in Balochistan can only succeed if central government does a better job of addressing the needs and concerns of the region's population. Much remains to be done.

Mohammad Luqman is an Islamic scholar and South Asia expert with a special research focus on Pakistan.

Very different Western reactions to the suffering in Ukraine and the Arab world show that there is a profound rift among cultures. Essay by Michael Young END_OF_DOCUMENT_TOKEN_TO_BE_REPLACED

The documentary "Nadia" tells the incredible story of Nadia Nadim, who was forced to flee from the Taliban as a child and became a football star. By Annabelle Steffes-Halmer END_OF_DOCUMENT_TOKEN_TO_BE_REPLACED

Three award-winning female directors appeal to the international film industry to save Afghan cinema. Supporting women filmmakers is more important than ever. By Christine Lehnen END_OF_DOCUMENT_TOKEN_TO_BE_REPLACED

Russia's ranking on the World Press Freedom Index has fallen again over the Kremlin's wartime censorship of the Ukraine conflict. From Myanmar to Mexico, journalists continue to ... END_OF_DOCUMENT_TOKEN_TO_BE_REPLACED

Ideally, those Europeans currently welcoming Ukrainian refugees would show the same sympathy to Syrians, Afghans and others fleeing war beyond the continent. But, argues Ian ... END_OF_DOCUMENT_TOKEN_TO_BE_REPLACED

END_OF_DOCUMENT_TOKEN_TO_BE_REPLACED
Social media
and networks
Subscribe to our
newsletter