No escaping life in Gaza

Reham al-Kahlout is 19 and has chosen an impossible job: she entertains people in a place where there isn′t much to laugh about. What′s more, she can′t even count on unconditional support from her extended family. Peter Munch reports from Gaza City

Dressed as a traffic police officer, Reham al-Kahlout stands at a dusty crossroads: her fingernails painted signal red, her uniform close-fitting, her long hair blowing in the desert wind. She is trying to wave the cars through, but a long traffic jam is building up in front of her. "Come on, move, move," Reham al-Kahlout shouts. But one of the guys sticking their heads out of their car windows so as not to miss the view retorts: "No, no, we like being here." That′s comedy in the Palestinian territory of the Gaza Strip.

There′s not much else to laugh about there and any distraction really should be welcome. But even this harmless video clip brought Reham al-Kahlout a barrage of angry criticism from the Hamas camp with its strict moral code. "That′s not art, it′s a disgrace," some people write on her Facebook page. A decent woman, they suggest, wouldn′t do such things.

In the Gaza Strip, comedians don′t just have to be funny

Nineteen year-old Reham al-Kahlout is a comedian. She likes to laugh a lot, "it′s part of my personality," she says. But in the Gaza Strip, comedians don′t just have to be funny; they also have to be brave. And that′s why she′s the only woman to have got involved in the genre so far and, of course, the only one sitting on the cafe terrace on this summer morning in jeans and trainers, with no headscarf. When she comes in, the waiter stares and the other customers whisper amongst themselves. Not an easy gig. "Sometimes I get recognised on the street," says Reham al-Kahlout. Then she laughs.

She is part of a young Palestinian comedy troupe called "Bas ya zalma". Her video clips are broadcast on a local television channel and over the Internet. The four boys in the group, she says, get asked for selfies everywhere they go; they are admired and adored, it′s only Reham al-Kahlout who is bad-mouthed.

"Before I joined, men played the women′s parts as well. And everyone thought that was okay," she says. "But when I play a woman′s role, people are up in arms. It′s mad, isn′t it?" But those are the conventions here and Reham al-Kahlout is fighting them armed with nothing but humour. "Comedy is the best way to get people to change," she believes. "I mean, they laugh because it′s their reality we′re making fun of, because it shows their behaviour and their stupidity."

The family council published a declaration – against her

Her comic antics even struck a nerve in her own family. The extensive Kahlout clan has a good name in Gaza, not to mention within the ranks of Hamas. The extended family is very conservative, so when Reham suddenly popped up on television, the family council published a declaration that she has since committed to memory: "We do not like what she is doing and we do not accept her leaving the house unveiled," it said. "That put a lot of pressure on me," says Reham al-Kahlout. 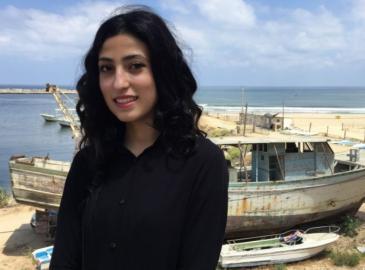 Nineteen year-old Reham al-Kahlout is a comedian. She likes to laugh a lot, "it′s part of my personality," she says. But in the Gaza Strip, comedians don′t just have to be funny; they also have to be brave

She herself initially reacted to this pressure by retreating. For weeks she didn′t leave the house – and then she said: "No, I′m not going to kill myself just to please others." Her mother was on her side, in any case; her father was angry at first, but then he gave in. "I′m not going to let criticism stop me any more," she says, "but I couldn′t do this if my parents didn′t support me."

Dreaming of a career in comedy

This is how she keeps her dream of a career in comedy alive. She has no role models; they′re all too far away – both geographically, and from the conditions under which she lives and about which she laughs. She would love to go to drama school, but there is no such thing in the Gaza Strip. And more than that, she would like to go to Egypt: "They value art there." But the borders are closed. There is no escaping life in Gaza.

And so she is studying law – that, at least, is a family tradition. "I will probably graduate at some point," she says. "But I′m never going to work as a lawyer." And there is something else she says she′ll never do: get married in Gaza. The issue arose not all that long ago. A distant relative of her mother′s, as is common, asked her parents for her hand in marriage. "The conditions were that I had to dress better and give up comedy," she tells me. "And that′s completely out of the question."

The issue does at least provide material for comedy clips about evil mothers-in-law or the young men who go looking for a wife. "When they get engaged, they′re nice and friendly," she says, "and after the wedding they turn into monsters." Apparently they find that funny in Gaza.

Home
Print
Newsletter
More on this topic
Interview with comedian Mona Shaikh "Being able to create a dialogue is a very important step for me"Stand-up comedy in Dubai: Clean humour for the Arab worldCreative protest against Syria's regime: The puppet rebellion
Related Topics
Comedy, Hamas, Performing arts, Women in the Islamic world
All Topics

Now that he has converted Hagia Sophia back into a mosque, Turkey's president, Recep Tayyip Erdoğan is setting his sights on the Al-Aqsa Mosque in Jerusalem. Joseph Croitoru ... END_OF_DOCUMENT_TOKEN_TO_BE_REPLACED

Two German Jews dreaming of living in the Holy Land chose to settle near Bethlehem. Under international law, Israeli settlement activities on Palestinian soil are, however, ... END_OF_DOCUMENT_TOKEN_TO_BE_REPLACED

The outpouring of solidarity worldwide following the violent death of George Floyd should prompt us to step back and fundamentally question racist structures and privileges based ... END_OF_DOCUMENT_TOKEN_TO_BE_REPLACED

Mikhal Dekel’s father was part of a contingent of Jewish children who went on an odyssey from Poland to Iran as a result of the Holocaust. Dekel has now written a book exploring ... END_OF_DOCUMENT_TOKEN_TO_BE_REPLACED

Jordan is not only waging a vigorous battle against coronavirus, but also against the Middle East peace plan proposed by U.S. President Donald Trump. By Birgit Svensson END_OF_DOCUMENT_TOKEN_TO_BE_REPLACED
Author:
Peter Münch
Date:
Mail:
Send via mail

END_OF_DOCUMENT_TOKEN_TO_BE_REPLACED
Social media
and networks
Subscribe to our
newsletter