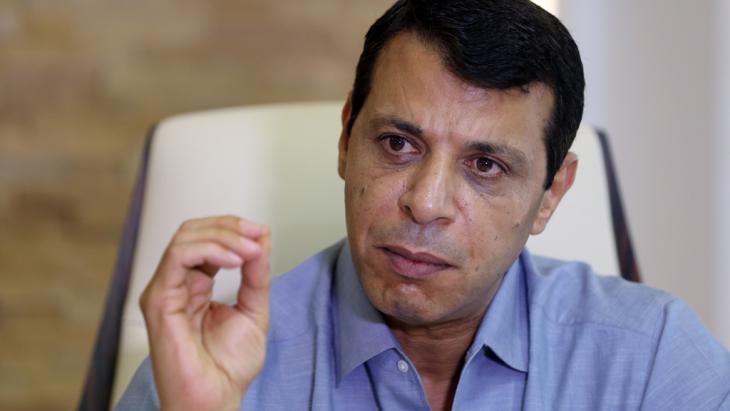 A finger in every pie

Formerly the Palestinian Authority′s head of security, Mohammed Dahlan is regarded not only as President Abbas′ arch-rival, but also as a political multi-talent with the best international connections. Many believe the ousted Fatah functionary is planning a return to the political stage. By Neville Teller

For years rumours of plots and counterplots have eddied around the controversial figure of Mohammed Dahlan, the charismatic Palestinian politician whom PA President Mahmoud Abbas regards as his greatest enemy and who might very well eventually succeed him. If anything the situation has grown worse in the past few weeks. For example, Dahlan′s name is being associated with the recent attempted coup in Turkey against the regime of President Recep Tayyip Erdogan – an assumption, incidentally, that runs counter to the theory that the coup was actually orchestrated by Erdogan himself, as a devious method to justify purging his political opponents and acquiring the autocratic powers he seeks for the presidency.

The evidence that links Dahlan to this plot is circumstantial, but back in January 2016 the Turkish paper Gercek Hayat actually reported that Dahlan was supervising a multinational plan to conduct a coup against Erdogan, led by the United Arab Emirates (UAE), backed by Russia and Iran.

And then, on the Turkish side, media reports on 27 July indicated that Turkey is looking into the role, if any, played by Dahlan in the coup attempt.  A leader of Turkey′s ruling Justice and Development Party (AKP), Ahmet Varol, claimed that Dahlan had close links with followers of Erdogan′s arch-foe, the US-based preacher Fethullah Gulen, accused by the Turkish authorities of master-minding the coup. The AKP leader admitted there was no hard evidence of Dahlan′s involvement, but asserted that the investigation was ongoing and ″we will not hesitate to punish and hold accountable those who were involved in harming our country″.

Whether or not Dahlan′s fingers were in this particular pie, there is no doubt that his international influence extends far and wide.  Dahlan has lived in the United Arab Emirates (UAE) for many years and is an adviser to Prince Muhammad Bin Zayed, the Crown Prince of Abu Dhabi.  He has been described as a ″riend″ of both the Montenegrin and Serbian Prime Ministers, Milo Djukanovic and Aleksandar Vucic. 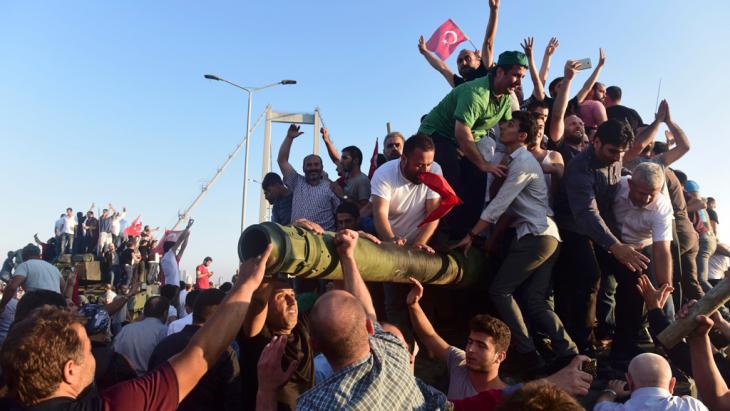 Rumours rife about the attempted coup in Turkey: "whether or not Dahlan′s fingers were in this particular pie, there is no doubt that his international influence extends far and wide," writes Neville Teller

In 2010 Dahlan and his wife obtained Montenegrin citizenship, Djukanovic describing him in parliament as a friend responsible for building bridges with Abu Dhabi′s royal family resulting in significant investment in the country.  Then, in 2013, Dahlan obtained Serbian citizenship, having reportedly promised Serbia millions of dollars in investments from the UAE.

A view widely held in Palestinian political circles is that Dahlan′s involvement in foreign affairs is part of a strategy designed to strengthen his status as the obvious successor to PA President Abbas. According to Ahmed Youssef, political adviser to former Hamas prime minister Ismail Haniyeh, ″Dahlan may have better chances at accessing high Palestinian positions than others. This is considering Israel′s [relative] satisfaction with him and his special ties with the UAE, Egypt, Saudi Arabia, Jordan and the Syrian opposition. The international relations that a Palestinian official has may allow him to climb to rungs of the leadership ladder.″

The editor of Jordan′s Al- Mustaqabal, Shaker al-Jawhari, believes Dahlan has the support of a wide range of regional actors. ″His influence has even reached Lebanon and Europe, thanks to the funds he is distributing to his supporters there. This makes him a strong and real competitor to Abu Mazen [Mahmoud Abbas].″ 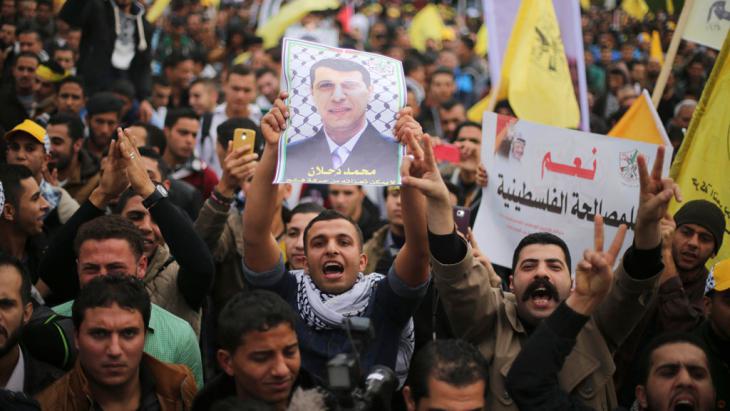 Popular at home and abroad: according to Ahmed Youssef, political adviser to former Hamas prime minister Ismail Haniyeh, ″Dahlan may have better chances at accessing high Palestinian positions than others"

The Middle East Eye website gives credence to the rumour of yet another plot centred on Dahlan. It asserts that Egypt, Jordan and the UAE have been liaising in a plan for Dahlan to be the next head of the Palestinian Authority and maintains that Hamas is prepared to put aside its long history of hostility to Dahlan (when he was head of security in Gaza in 1995-2000, he had hundreds of Hamas members arrested for undertaking armed operations against Israel).

The planned post-Mahmoud Abbas era would leave Dahlan, his arch-rival, in control of the Palestinian presidency, the PLO and the PA. It was reported that the UAE had held talks with Israel about the strategy to install Dahlan and that the three principals would inform Saudi Arabia once they reached an agreement on its final shape.

On June 24 Khaled Meshaal, the head of Hamas′ political bureau, held a press conference in his hotel in Doha. ″There is a regional plot,″ he announced, ″to parachute someone from the outside to rule Gaza and Ramallah.″ The journalists present understood that he was referring to Mohammed Dahlan. Ever since Avigdor Liberman was appointed Israel′s new defence minister on 30 May, rumours had been spreading about the plan – or is it conspiracy? – to have Dahlan anointed as Palestine′s next leader.

According to Palestinian and Israeli sources, in January 2015, Liberman, who was then serving as the foreign minister, secretly met with Dahlan in Paris to discuss ″Palestinian Authority affairs.″ The mere suggestion of a Liberman-Dahlan accord — whether true or not — is enough to stigmatise Dahlan and provide his rivals with much ammunition, which they have not hesitated to use. 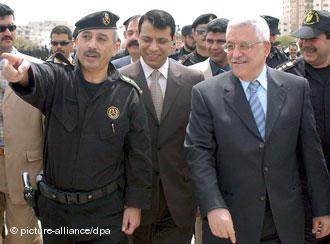 From Mahmoud Abbas′ former henchman to arch-rival: Mohammed Dahlan was suspended by the central committee of the Palestinian Fatah movement on 28.12.2010. In addition to corruption charges, the former Gaza security chief was accused of plotting to overthrow the Palestinian president

In Gaza Dahlan′s relations with Hamas have improved remarkably, thanks to the close ties he has fostered with Egyptian President Abdul Fattah al-Sisi. The leaders of the Gaza-based movement had hoped that Dahlan would help them mend fences with Sisi. They also welcomed the infusion of money from the Dahlan Foundation in the Gaza Strip aimed at promoting projects and helping the needy. Hamas leaders in Gaza cannot afford to reject generous financial aid, even if Dahlan is the sponsor. It is obvious that these national projects bolster and cement his chances of achieving the leadership of the Palestinian political machine.

In a clinch with Fatah

Dahlan′s toughest obstacle is the Fatah establishment. In June 2011 Dahlan was expelled from Fatah′s ruling body following allegations of financial corruption and murder – Abbas accused him of murdering the late Palestinian leader, Yasser Arafat.  Dahlan was tried by the PA in absentia on corruption charges.

But Dahlan now has support from a new Fatah leadership commission, which appears to be diverging radically from established Fatah antagonism to him. On 25 July senior Fatah leaders in Gaza were reported to have accused the new commission of taking decisions in favour of Dahlan that reinforces his grip on the movement against Mahmoud Abbas. In a letter sent to Abbas, they dubbed this a kind of insurgency and warned of the ″full collapse″ of the organisational frame of Fatah that started when the current leadership commission took office. The Fatah leaders who wrote the letter accused the commission of connection with outside powers and serving external agendas.

Do Dahlan′s strengths overcome his weaknesses in this bid to succeed Abbas – if indeed it is, as rumour has it, a serious bid backed by formidable outside interests?  The forthcoming regional elections to be held in the West Bank and Gaza may provide a valuable indication of Dahlan ′s political future.

Two German Jews dreaming of living in the Holy Land chose to settle near Bethlehem. Under international law, Israeli settlement activities on Palestinian soil are, however, ... END_OF_DOCUMENT_TOKEN_TO_BE_REPLACED

The outpouring of solidarity worldwide following the violent death of George Floyd should prompt us to step back and fundamentally question racist structures and privileges based ... END_OF_DOCUMENT_TOKEN_TO_BE_REPLACED

Mikhal Dekel’s father was part of a contingent of Jewish children who went on an odyssey from Poland to Iran as a result of the Holocaust. Dekel has now written a book exploring ... END_OF_DOCUMENT_TOKEN_TO_BE_REPLACED

Jordan is not only waging a vigorous battle against coronavirus, but also against the Middle East peace plan proposed by U.S. President Donald Trump. By Birgit Svensson END_OF_DOCUMENT_TOKEN_TO_BE_REPLACED 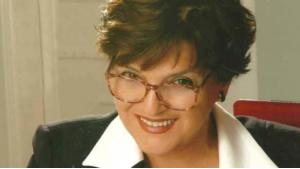 When Sahar Khalifeh’s "Passage to the Plaza" appeared in English this year, thirty years after its initial publication, it seemed out of sync – too late and too overshadowed by ... END_OF_DOCUMENT_TOKEN_TO_BE_REPLACED

How are people in the Middle East and North Africa dealing with the new coronavirus pandemic? Women from countries across the region, some of them war zones, share their worries ... END_OF_DOCUMENT_TOKEN_TO_BE_REPLACED
Author:
Neville Teller
Date:
Mail:
Send via mail

END_OF_DOCUMENT_TOKEN_TO_BE_REPLACED
Social media
and networks
Subscribe to our
newsletter