The Palestinian writer Samir El-Youssef has found his identity in exile in London. Yet the idea of a homeland has always been alien to him. A portrait by Alexandra Senfft

​​ "Yet again we face the challenge of envisaging a language that could spare us both the shame of silence and the accusation of treason; a language that in spite of everything would up hold our hope for peaceful co-existence," wrote the Palestinian author Samir El-Youssef at the peak of the Gaza War in January 2009, in a fictitious letter to an Israeli friend published in the German Süddeutsche Zeitung.

Gaza is one of the most over-populated swathes of land in the world: almost 1.5 million inhabitants are crowded into 360 square kilometres. The local unemployment rate is around 50 percent, with eight out of ten households below the poverty line.

The sight of the destruction and human suffering shocked many observers into silence. Those inside and outside the region despaired over how to react appropriately and formulate a constructive, forward-looking standpoint.

"We must never give up!" wrote Samir El-Youssef in his letter. He called on both sides to show prudence, to prevent the hope for peace being buried beneath the rubble of Gaza.

El-Youssef has a talent for finding the right words. Growing up a Palestinian refugee in a camp in South Lebanon, he experienced bombings at first hand. Overcoming the trauma of war as he has entails gaining emotional distance from the terrible events – a healthy protective reaction. And a protected space is all the better to rationalise, reflect and find solutions.

It is not least language itself that aids this mental process. It is no coincidence then that El-Youssef puts certain words into the mouth of his Palestinian protagonist in the novel The Illusion of Return. Like the writer himself, the character lives in London, and tells us he almost only ever speaks English and rarely his native language: "I just enjoy the feeling of anonymity. Besides, speaking in Arabic would compel me to accept assumptions and values which I no longer hold."

"One of the biggest problems is that both sides are racists," says Samir, in a perfectly calm and sober tone. He knows of the dark sides slumbering within us all, and addresses them on numerous occasions in his work. "The first step towards solving this conflict is self-criticism and the acknowledgement that we all have racist elements within us," he adds. And then he takes another step across the boundary to the other side:
"Being constantly rejected and isolated by all those around them must be a nightmare for the Israelis."

Samir can identify with that feeling of isolation. In 1975, at the age of ten, he moved from the refugee camp to the coastal town of Sidon with his parents and eight brothers and sisters. 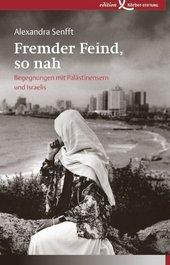 Alexandra Senfft's article about El-Youssef is an extract from her recently published book on Palestinians and Israelis: "Fremder Feind, so nah" ("Foreign Foe, So Close - Encounters with Israelis and Palestinians")

​​ The family existed on benefits from the UN aid agency for Palestinian refugees, topped up by his father's wages from construction and agricultural work. His mother kept a strict budget, enabling the El-Youssefs to get by despite their poverty. From an early age, Samir felt he did not have a homeland, and he understood that life is full of ambiguity and ambivalence.

His mother is a Shi'a Muslim, his father Sunni. Though that was hardly the reason for his parents' constant arguments during his childhood, the fact presumably trained him to integrate diverging standpoints and perceptions within his own person. He was 17 when the Israeli army invaded Lebanon in 1982 to combat the PLO. There were days when he ran for his life.

In 1985 the War of the Camps broke out as a part of the Lebanese Civil War, with the Shi'a Amal militia attacking Palestinians to gain control: "Lebanon in the eighties was awful, a state of nature with everybody at the throats of everybody else. To be a Palestinian at the end of the decade was hopeless, absolutely hopeless..." El-Youssef told the British Independent newspaper in 2007. He began writing short stories and articles during the civil war – and longed to escape.

"No Palestinian wanted to stay back then," he says. "Everyone dreamed of leaving Lebanon, but nobody knew where to go."

Most people spend their whole lives dreaming, but some take their fates into their own hands. Samir El-Youssef risked a departure at the age of 25, leaving his family, friends and neighbours behind at the end of the 1980s. It was another journey into uncertainty, taking him first to Cyprus. There he made a living doing editorial work while he applied for a visa for further shores.

Samir's actual goal was Germany, but the borders remained closed to him. Meanwhile, the British took him in and supported him through a difficult period of unemployment in exile. "I'll always be grateful to them for that," he says.

He has lived in London since 1990, studying political philosophy and then working as a writer. Another ambivalence in his life: he may feel British now, but the Palestinian, refugee and exile have remained part of his identity. "Home" and "homeland" are terms that mean little to Samir – he has never felt tied to a particular place. Not to Lebanon, which was never his country, nor to Palestine or what his forefathers once imagined it to be.

​​ In his new novel A Treaty of Love, Samir describes a relationship between a Palestinian man and an Israeli woman who meet in London. The reader soon senses this is a difficult love that will never find fulfilment – an analogy for the failed political negotiations for peace.

"Our relationship was based on an undeclared treaty to be in love with one another or, to be more precise, to act out that we were in love," explains the novel's narrator. "That's it, it's a treaty of love between a Palestinian man and an Israeli woman. And just like the many treaties that have been signed between Palestinians and Israelis, it was awkward and shaky, too late or too early: too late to be unprecedented and a taboo-breaker, and too early to become just another relationship between two people from two different backgrounds."

"Samir is not only a unique writer but also a unique person," the Israeli writer Etgar Keret wrote to me from Tel Aviv. "Both in his fiction and his essays, he is able to break with the clichéd arguments which are thrown into this conflict and dig beyond them to much deeper human truths."

Keret continued: "For me, Samir's humanity, sincerity, lucidness and, forgive my post-colonialism, wonderful Jewish humour, make him the most interesting contemporary writer dealing with the Palestinian-Israeli conflict."

With so much praise from the "enemy" it is small wonder that many Palestinians are not fond of Samir. But he shrugs this rejection off with a bluntly offensive approach, saying he is simply closer to Israelis from the peace movement than to Hamas activists or other narrow-minded ideologists.

Those who argue against normalising relations with Israel and disapprove of Palestinians having contacts to Israelis and Jews are a particular thorn in his side. For him these are empty, irresponsible slogans far removed from reality.

A question of war or peace

"It's not about the choice between Israel and Palestine, it's about the question of war or peace," he sums up our conversation. If he were to decide on one side, he says, he would be justifying the war. I have to agree – as the same applies to the German position.

Outside the front door it has started to rain – typical winter weather in London. By the end of our dialogue, both Samir and I feel uplifted. Not only have we had a very constructive conversation, we've also worked on an idea for my book project.

As we head out into the cold, our hats pulled down low on our brows, I think: What a shame I'm not an Israeli and we're not politicians – otherwise we'd have come a good step closer to peace today.
Alexandra Senfft

Alexandra Senfft studied Near and Middle East studies and has lived and worked in Palestine and Israel. She is now a freelance journalist and writer.

Dossier
Israeli-Palestinian Dialogue
Beyond the violence in the Middle East conflict, there are many individuals and initiatives working towards lasting peace in the region. Our new dossier presents just some of them.

END_OF_DOCUMENT_TOKEN_TO_BE_REPLACED
Social media
and networks
Subscribe to our
newsletter