Judging by the patterns of the embroidery on a dress, one can determine where someone comes from – almost each Palestinian town has its own unique pattern. Now a newly published book is tracing the history of this Palestinian handcraft. A review by Susannah Tarbush 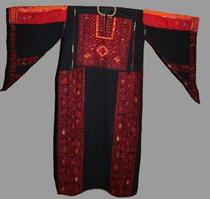 One town, one pattern: Palestinian embroidery is an integral part of the Palestinian geographical and cultural landscape

​​The embroidery with which Palestinian women have traditionally decorated their dresses is one of the most characteristic elements of Palestinian material culture. In her recent book Palestinian Embroidery Motifs: A Treasury of Stitches 1850-1950 – published jointly by Melisende Publishing of London and Rimal Publications of Nicosia – Margarita Skinner focuses on the motifs used in embroidery. They include the Tall Palm motif (also known as Ears of Wheat) of the Ramallah area, Scissors and Roses from Gaza, the Key of the Heart from Bethlehem and the Cypress Tree motifs found all over Palestine.

Skinner writes: "The embroidered dresses of the Palestinian women are very much like Persian carpets. They are not only unusually beautiful. They also tell stories." In the Negev, unmarried Bedouin girls and widows wear dresses with blue embroidery. Once a widow remarries, red or pink embroidery is added.

Skinner wrote the book in association with her friend of 40 years Widad Kamel Kawar, the legendary Amman-based collector of Palestinian costume. Skinner documents more than 200 motifs, giving their names in Arabic and English and identifying the areas of Palestine from which they come. Falak Shawwa's photographs capture the artistry and vibrant colours of the motifs, and the splendour of festive dresses. There are also diagrams of each motif.

Assembling information on the motifs was not easy. The names of motifs change from area to area, and often from one generation to another. "What is a Moon in Ramallah is a Star in Hebron. What is an Orange Branch to a grandmother is a Rose Branch to the granddaughter," says Kawar.

It is not known exactly when women in Palestine started to put thousands of stitches on dresses, coats, jackets, veils and cushions. Research on Palestine embroidery has found no examples earlier than the 19th century.

In Palestinian villages, the tending of chickens and selling of eggs was the domain of women, who used this source of income to buy thread and fabric. Girls grew up watching their mothers embroidering, and learnt the skill from the age of about ten.

The main stitches used in Palestinian embroidery are cross-stitch and couching. In couching a thick thread is positioned on top of the fabric, and a thinner thread is stitched over it to keep it in place. This gives a curving design, of which there are many examples in Palestinian Embroidery Motifs.

The "Paris of Palestinian village fashion"

Each area of Palestine had characteristic embroidery. Ramallah, together with Bethlehem and Beit Dajan, was well known for its lavish embroidery. The embroidery on a festive dress could have 200,000 cross-stitches. Bethlehem's skill in the art of couching made it the "Paris of Palestinian village fashion".

The book organises the motifs within six sections. The first consists of border motifs, while the others sections are based on the sources of inspiration: daily life, fauna, the garden and fields, nature and the environment, and trees.

From the mid-20th century Palestinian embroidery started to decline. The establishment of the State of Israel in 1948 and the 1967 Arab-Israeli war uprooted hundreds of thousands of Palestinians, many of whom ended in up refugee camps. "With their own local culture dispersed, they lost parts of their village identity and the embroidered motifs of certain areas became mixed with others in names and motif arrangements," Kawar notes.

A style referred to as The New Dress developed in refugee camps. This dress tells us only that the wearer is Palestinian, and indicates little about its origins. Some organizations now run modern embroidery projects, helping to keep skills alive.

Skinner hopes that her book will help to preserve and revive the heritage of Palestinian embroidery. "Let the stitches speak to us again," she says.

Interview with Khouloud Daibes
The Fight for Palestine's Historic Architecture
Khouloud Daibes has been head of the Centre for Cultural Heritage Preservation in Bethlehem for the last six years. Youssef Hijazi talked to the architect, who has recently been given a post on the Palestinian Authority Cabinet

Reem Kelani – "Sprinting Gazelle"
"I Defend My Right to Defend My Right"
Following her widely acclaimed featured performance on Gilad Atzmon's "Exile", the British-Palestinian singer Reem Kelani has released her own debut album, establishing herself as important artist in the Palestinian musical tradition. By Lewis Gropp

END_OF_DOCUMENT_TOKEN_TO_BE_REPLACED
Social media
and networks
Subscribe to our
newsletter