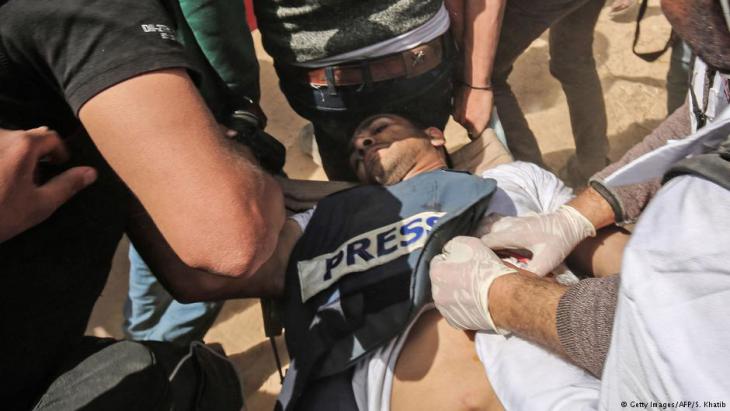 In the conflict between Israel and the Palestinians, members of the press are being targeted by both sides. Palestinian journalists are coming under increasing pressure – even from the Palestinian Authority. By Joseph Croitoru

Things have got steadily worse for Palestinian journalists in recent years. The recent events in the Gaza Strip are just one extreme example of this: shots fired by Israeli snipers killed one Palestinian photojournalist and injured half a dozen of his colleagues. They were reporting on the "Great March of Return", which was organised under the aegis of Gaza's ruling Hamas party.

Yasser Murtaja, the reporter who was killed, was wearing a flak jacket with press markings. According to Israeli Defence Minister Avigdor Lieberman, he had been working with a drone and was, for that reason, considered a security threat. This version of events has not been confirmed by the military. Indeed, the military investigation concluded that no drone was used at the place in question, at least none that could have posed any kind of threat to Israeli soldiers.

The camera as a weapon

The Murtaja case was immediately exploited politically on all possible channels both in the Gaza Strip and by Palestinians in the West Bank. Murtaja is hailed as a "martyr for truth" on one particular poster that shows him holding a large telephoto lens that points upwards and casts a shadow in the shape of an anti-tank weapon. The poster was also used by fellow Palestinian journalists remembering their colleague at a protest march in Nablus.

Depictions such as these play into the hands of the Israeli security forces. Israel's right-wing media outlets reference this poster image and claim that Murtaja has long been an officer in one of Hamas's security forces and in 2015 tried to smuggle a drone into the Gaza Strip that was intended for military reconnaissance.

Israel's left wing, on the other hand, has cast doubt on this story. The newspaper Haaretz, for example, pointed out that Murtaja's production company Ain Media recently received financial support from the United States Agency for International Development (USAID). With USAID's strict criteria for such support, it argued, it is safe to assume that Ain Media has no links to Hamas. 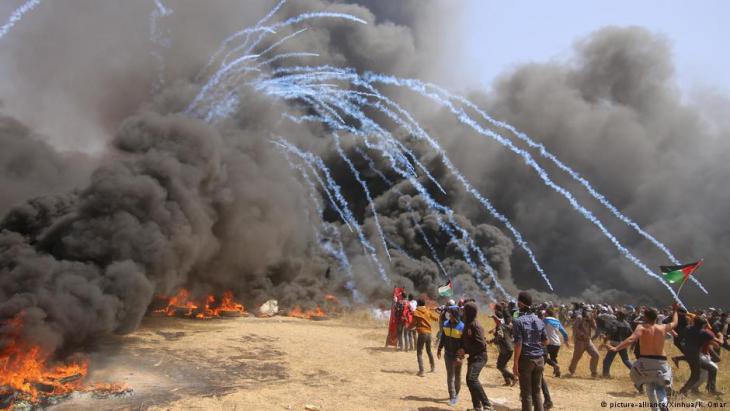 The company does, however, specialise in drone footage – a fact clearly demonstrated by the corresponding photos posted on Murtaja's Twitter and Facebook pages, which he used to market himself and his company right up until the end. On 29 March, for example, he posted an aerial photograph of the camp of demonstrators' tents with the caption "Ain Media's drones celebrate in the skies above the tents".

But does this kind of photojournalism, which almost borders on propaganda and is dedicated to a nationalistic cause, justify the actions of the Israeli Army? As far as Israeli journalism organisations are concerned, it certainly does not. Their vociferous protests against the army's declaration that it never at any time deliberately targeted Palestinian journalists and their rejection of this claim led the military leadership to announce that it will investigate the cases in question.

Hindered from all sides

When it comes to the media, Israeli security forces in the Palestinian context have long been the focus of criticism. In March, one particular case caused a furore: according to the Palestinians, members of the Israeli secret service passed themselves off as journalists on the campus of Birzeit University and kidnapped Omar al-Qaswani, head of the Student Council and the leader of the "Islamic Block" list, which has close ties to Hamas and is a major force on the council.

The Israeli Border Protection Agency denied that its agents had ever disguised themselves in this way. However, they only did so after a hail of protests from both the Israeli and Palestinian sides.

For those working in the Palestinian media, the case does not come as a big surprise. After all, they regularly complain that Israeli soldiers hamper their work. Although the Ramallah-based Palestinian Ministry of Information documents such cases on its website every month, this list does not paint a comprehensive picture of the political pressure and reprisals faced by Palestinian journalists.

From Syrian war crimes to U.S. hypocrisy in the Julian Assange case, the global "erosion of human rights standards" is of critical concern, UN Special Rapporteur on Torture Nils ... END_OF_DOCUMENT_TOKEN_TO_BE_REPLACED

Turkey is the second-largest exporter of TV series in the world, boasting a growing presence on international screens from Pakistan to Chile. The "dizis" offer audiences an ... END_OF_DOCUMENT_TOKEN_TO_BE_REPLACED

There were signs of a return to something akin to normality at the weekend as mosques in Saudi Arabia and the Al-Aqsa mosque in Jerusalem re-opened for the first time since COVID- ... END_OF_DOCUMENT_TOKEN_TO_BE_REPLACED

Jordan is not only waging a vigorous battle against coronavirus, but also against the Middle East peace plan proposed by U.S. President Donald Trump. By Birgit Svensson END_OF_DOCUMENT_TOKEN_TO_BE_REPLACED

The anti-Israeli Quds Day did not take place this year – a first both for Iran and Lebanon's Hezbollah. While Hezbollah leader Nasrallah sees his organisation in a state of siege ... END_OF_DOCUMENT_TOKEN_TO_BE_REPLACED

The corona crisis has led to an upswing for the Palestinian textile industry, but has done little to relieve the dire straits in the territories. Without international support, ... END_OF_DOCUMENT_TOKEN_TO_BE_REPLACED

Comments for this article: In the crosshairs

END_OF_DOCUMENT_TOKEN_TO_BE_REPLACED
Social media
and networks
Subscribe to our
newsletter