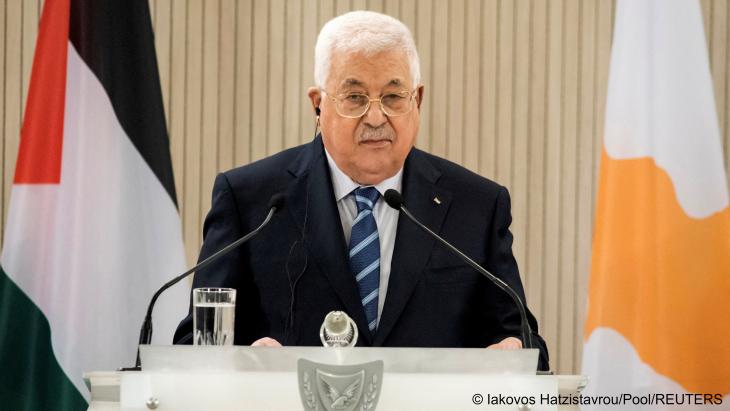 Lapid and Abbas discussed "continued cooperation and the need to ensure quiet and calm," the prime minister's office said, in the first call between the two since Lapid took over as caretaker prime minister in Israel last week ahead of elections on 1 November.

Gantz said on Twitter that Thursday's meeting "was conducted in positive terms" and the two discussed civilian and security challenges in the region. "We agreed to maintain close security coordination and to avoid actions that may cause instability," Gantz said.

It was the third known meeting between Abbas and Gantz since August last year. Simmering tensions between Israel and the Palestinians grew more intense following the May 11 killing of Palestinian-American journalist Shireen Abu Akleh during an Israeli army raid in the West Bank city of Jenin.

Palestinians say Abu Akleh was shot deliberately by an Israeli soldier. Israel denies this. The U.S. State Department said on Monday that Abu Akleh was likely killed by gunfire from Israeli positions but it was probably unintentional.

The Palestinian Authority exercises limited self-rule in parts of the West Bank. U.S.-brokered talks aimed at establishing a Palestinian state in Israeli-occupied territory collapsed in 2014 and show no sign of revival. The Palestinian militant group Islamic Jihad condemned Thursday's meeting in a statement.

"Insisting on communication and security meetings serves the interests and plans of the enemy (Israel) and gives it a free hand to practice the aggression our people are subjected to every day," it said.    (Reuters)

More on this topic
The killing of journalist Shireen Abu Akleh: The face of a generationMiddle East conflict: Shoah and Nakba – two interlinked catastrophesU.S. policy in the Middle East: The America that Israel and Palestine need
Home
Print
Newsletter
MoreAll Topics

END_OF_DOCUMENT_TOKEN_TO_BE_REPLACED
Social media
and networks
Subscribe to our
newsletter