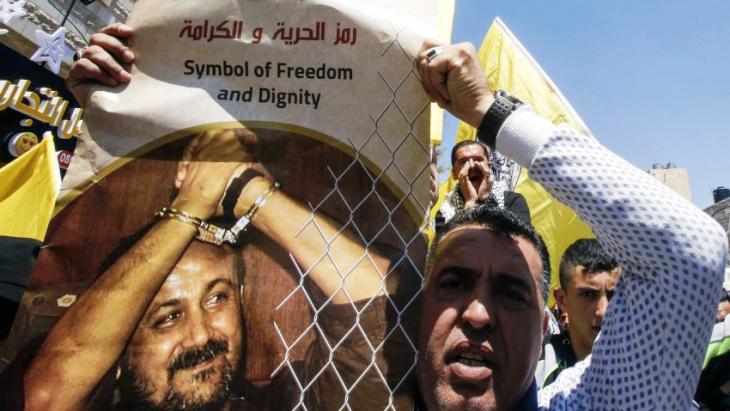 Palestinian prisoners in Israel have launched a collective hunger strike. The imprisoned Fatah leader Marwan Barghouti is thus returning to the political stage. Inge Gunther in Jerusalem has the details

Nothing riles the Palestinians these days quite as much as the fate of their loved ones behind Israeli bars. There is hardly a family in the West Bank or Gaza that has yet to witness the arrest of one of its members. Since 1967 some 600,000 Palestinians have served time in Israeli prisons – and some people even put the figure as high as 800,000. A day of remembrance is dedicated to them, 17 April, which is observed by all political camps.

That symbolic date is ideal for mobilisation, both in and outside of prison. It is thus no coincidence that Marwan Barghouti, the highest-ranking Fatah leader ever incarcerated in Israel, chose that day to initiate a mass hunger strike of indefinite duration for better conditions in the prisons. His call to refuse food in the name of "freedom and dignity" has so far been answered by around 1,500 Palestinian prisoners. And hardly a day has gone since the hunger strike started without supporters and relatives taking to the streets in Bethlehem, Nablus, Ramallah or Gaza City to show their moral support.

The Palestinian National Authority has likewise declared its solidarity with the hunger strikers, along with President Mahmoud Abbas, who did not however mention Barghouti's name. This alone is an indication that the campaign does not really fit in with Abbas's political concept. He has an appointment at the White House on 3 May to visit US President Donald Trump. And an escalating situation at home will hardly help him to gain Washington's sympathy for the Palestinian cause.

What's more, the strike launched by Barghouti is being viewed in Ramallah as a kind of challenge to Abbas. There are rumours that Barghouti is trying to enforce his own claims to leadership. His followers vehemently deny this, saying that over a thousand starving prisoners would not risk their own health just to give Barghouti more political clout.

The prisoners’ demands are allegedly entirely pragmatic instead: humane treatment, adequate medical care, more visits permitted by their families, access to payphones so they can stay in touch with their wives and children. Such conversations are monitored anyway and are permitted to ordinary criminals, but not to inmates who have perpetrated political attacks or other acts of resistance and have thus been classified by Israel as "security prisoners". 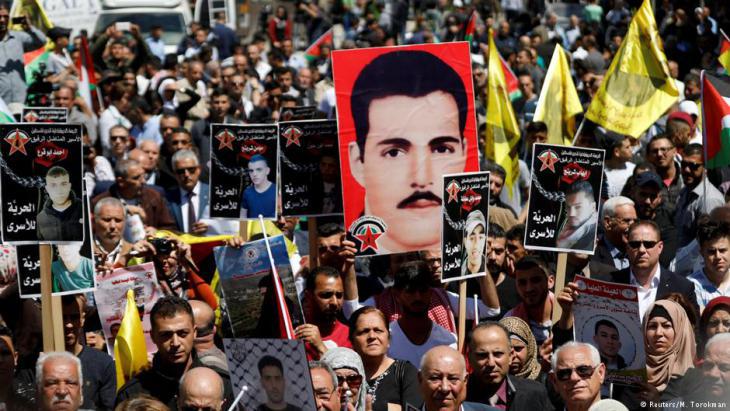 Demonstrating solidarity with hunger-striking Palestinian prisoners: 6,500 Palestinians are currently under detention in Israeli prisons, among them 62 women and 300 minors. Some 500 are held in administrative detention, which allows individuals to be imprisoned without charge or prosecution. Among the detainees are 13 Palestinian members of parliament. The last major hunger strike, involving 3,000 Palestinian prisoners, occurred in 2013. Should the hunger strike continue, it could mean a serious challenge to the Israeli authorities

The hunger strikers are also demanding that administrative detention be abolished, a practice that dates back to the era of the British Mandate. Currently, 500 Palestinians have been locked up under this measure, 15 of them elected members of parliament, without knowing what they are charged with or when they will be released. PLO Chairman Abbas cannot afford to ignore these demands if he doesn't want to risk the last vestiges of his already dwindling popularity.

Charisma and the common touch

Meanwhile, Barghouti ranks high on the popularity scale for Fatah politicians. His name comes up again and again whenever people discuss the possible political successor to the current president, who all too often seems aloof and fatigued these days. The 57-year-old Barghouti is reputed to possess something the soon-to-be 82-year-old Abbas lacks: a certain charisma and the common touch. The respect he enjoys among his own people has only increased since he was sent to prison 15 years ago. He is serving a draconian sentence (five times life plus forty years), handed down by a civil court in Tel Aviv because of his involvement in terrorist attacks.

Barghouti didn't kill anyone by his own hand. He has always been a political thinker instead. But the one-time advocate of the Oslo peace process, who once maintained political friendships with Israelis, played a key role in the Second Intifada as an ideological mastermind and head of the Tansim, a militant Fatah group. He is even touted by some as the "Palestinian Nelson Mandela" in allusion to the legendary South African freedom fighter, who likewise argued for armed resistance under certain circumstances while confined to jail.

The polls show that Barghouti is the only Fatah leader who has the chance to achieve a clear victory over the Islamist Hamas if elections were to be held. At the Fatah Congress last November, he received the most votes, but Abbas did not appoint him as his deputy, choosing instead to relegate him to the political side-lines.

Barghouti's return to the political stage

Now Barghouti is back. The decision by the Israeli prison authorities to immediately put him in solitary confinement when the hunger strike began will probably only serve to strengthen his image as a true champion of his people. Israel was particularly rankled when Barghouti explained the reasons for the prisoners' protest campaign in an op-ed piece in the "New York Times", in which he accused the prison authorities of "torture, inhumane and degrading treatment and medical negligence". 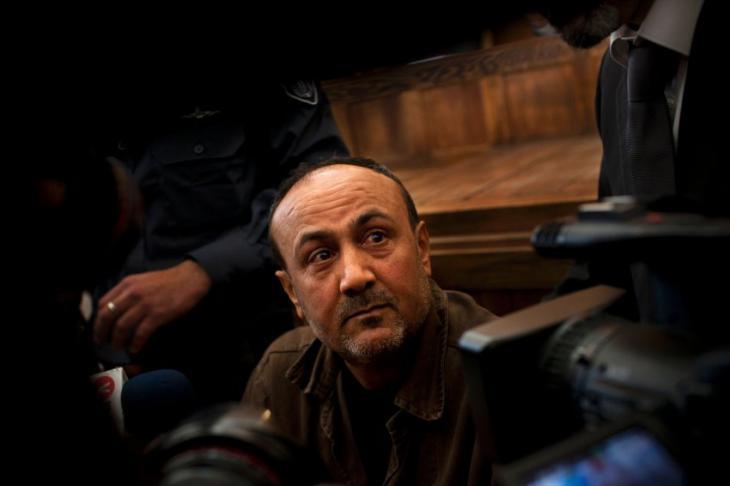 The Palestinians′ Nelson Mandela: currently serving a life sentence, Marwan Barghouti was one of the leaders of the Second Intifada, the Palestinian uprising against Israeli occupation which took place between 2000 and 2005. He is regarded as one of Fatah′s most popular politicians. According to polls – and given the chance – he would win the presidential election. Many Palestinians regard him as a hero of the people. The Israelis on the other hand point to the bloody suicide attacks of the Second Intifada and Barghouti′s role in the uprising

In the eyes of the right-wing nationalists, Barghouti will always be an arch-terrorist. The outrage was thus all the greater when, on Israel Army Radio of all places, a left-wing journalist confronted Tourism Minister Yariv Levin with the heretical question of whether, before the founding of the Israeli state, the Jewish underground fighters had not also been common killers from the point of view of the British Mandate.

Despite everything, Barghouti still enjoys the sympathy of many in the Israeli peace camp. "I have a confession to make: I like Marwan Barghouti," Uri Avnery acknowledged in an article on the hunger strike. He said he considers him "a born leader" who could play a key role for the Palestinians in a two-state solution. That might overestimate his power. After all, among the 6,500 inmates currently sharing time behind bars with Barghouti, whose well-equipped cell is said to resemble a library, there are also quite a few who begrudge the ambitious politician his status.

It remains to be seen whether his strategy will prove successful and prisoners belonging to Hamas will feel compelled to join the hunger strike in the coming few weeks. A hundred inmates are said to have already given up fasting after the first week.

A showdown with an unknown outcome and plenty of potential for conflict is imminent. Israel's Interior Minister Gilad Erdan has announced that there is nothing to negotiate with the prisoners. Anyone who refuses food can expect to be isolated from others as well as being subject to further disciplinary measures. As a precaution, though, Erdan already ordered a military hospital to be built next to Ketziot Prison. Many believe that hunger strikers are to be force-fed there – a measure that many doctors in Israeli hospitals have up to now refused.

There have already been several hunger strikes organised by Palestinians, usually with meagre success. And this time, it is not only the prison authorities that are putting pressure on the inmates. Prime Minister Benjamin Netanyahu has also broached the topic of the prisoners again. In an interview on the US Fox News network, he called on the Palestinian National Authority to stop monthly allowances for prisoners and their families if it wants to prove its readiness for peace.

Asmaa al-Atawna's debut novel "Missing Picture" has been published in German translation (Keine Luft zum Atmen – Mein Weg in die Freiheit). In it, she describes life in Gaza from ... END_OF_DOCUMENT_TOKEN_TO_BE_REPLACED

At the end of every year, the team at Qantara.de gives you a run-down of the ten most-read articles on the site over the past 12 months. Here is a quick overview of the stories ... END_OF_DOCUMENT_TOKEN_TO_BE_REPLACED

Palestinian Christians are an integral part of the Palestinian national movement. This is the conclusion reached by the Chilean-born Palestinian political scientist Xavier Abu Eid ... END_OF_DOCUMENT_TOKEN_TO_BE_REPLACED

Jesus – Issa in Arabic – doesn’t merely enjoy the highest place among the prophets in the Koran. He is also revered in Islam’s mystical tradition for his message of love and mercy ... END_OF_DOCUMENT_TOKEN_TO_BE_REPLACED

With reported hostilities against Israeli journalists and the flag of the Palestinian territories flying on the streets and in the stadiums, it is clear the World Cup in Qatar is ... END_OF_DOCUMENT_TOKEN_TO_BE_REPLACED
Author:
Inge Günther
Date:
Mail:
Send via mail

END_OF_DOCUMENT_TOKEN_TO_BE_REPLACED
Social media
and networks
Subscribe to our
newsletter