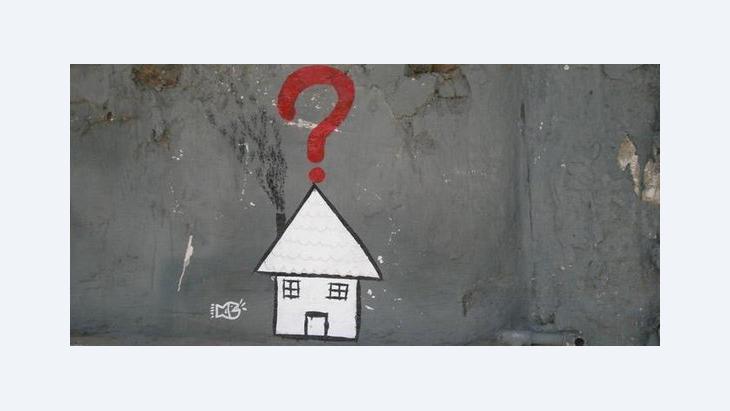 Ain El Helweh looks like a slum. The alleys are dark and narrow; the asphalt is peppered with potholes; two- and three-storey residential buildings stand shoulder to shoulder with small grocery shops and workshops; the grey plaster is peeling off many walls; the buildings look provisional.

Ain El Helweh is the largest of the 12 Palestinian refugee camps in Lebanon. About 40,000 people live here in cramped conditions. The camp is situated very close to the southern Lebanese city of Sidon and has really grown together with the city in recent decades.

Riham Ali was born in this camp: "For me, it is hell," says the 21-year-old, who explains that there are no proper streets here, it is cramped and stuffy, and electricity and water are often switched off.

Riham is also very angry about the constant checks conducted by the Lebanese army: "They stand at the entrance to the camp. I often end up fighting with them because I sometimes refuse to show them my identity card."

The dream of returning 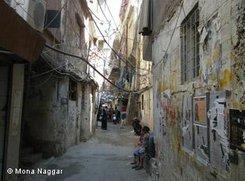 Narrow alley-ways, hardly any natural light and little fresh air are all facts of life for the people living in Ain El Helweh, the largest Palestinian refugee camp in southern Lebanon

​​Just like most of the inhabitants of Ain El Helweh, Riham is descended from Palestinians who had to leave their native home in 1948 after the foundation of the state of Israel. Riham's grandparents hail from Safed, a city that is now in northern Israel. For her, there is no doubt: she is determined to return there one day.

Returning to the native home of her forefathers is like a dream that has been passed on by parents to their children. It is a dream that helps the refugees to endure their life on the fringes of Lebanese society.

Although only 21, Riham is already in the middle of her second course of professional training, yet has little hope of actually getting a job. She is a qualified book-keeper, but is now back at college, training to be an engineer's assistant. "My future is already failed," says a convinced Riham, "I am studying and studying, but with no prospect of success. No one employs me because I am Palestinian."

Special rules apply to Palestinian refugees in Lebanon. They are not permitted to either pursue a long list of professions or acquire property outside the camp. According to Lebanese politicians, the reason for this legal discrimination is the fact that refugees are not supposed to stay in their host country indefinitely. The fear that the majority Sunni Palestinians could change the denominational make-up of Lebanon is great. 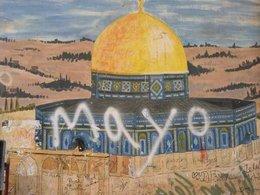 This mural of the Dome of the Rock in Jerusalem symbolises the hope of return of Palestinian 1948 refugees: according to the United Nations Relief and Works Agency for Palestine Refugees in the Near East (UNRWA), more than 450,000 Palestinian refugees live in Lebanon alone

​​The Palestinian National Authority's plan to get the United Nations General Assembly to recognise Palestine as an independent state on the basis of the 1967 borders is greeted with mixed feelings by the refugees in Lebanon.

Many young Palestinians like Riham hope that their situation in life would be improved by the declaration of the Palestinian state. As Palestinian citizens, they would perhaps enjoy the same status as all other Arab state citizens.

Many representatives of the older generation, however, are sceptical. Like Abu Salih – an 88-year-old who had to leave his village near the Israeli city of Acre at the age of 25 – they have lost faith in politics.

He has no illusions about ever returning. "My children still hope. They were born here and know nothing of Palestine, but they would give everything to live there." Abu Salih, on the other hand, is convinced that an independent Palestinian state would be of no benefit to the old refugees.

For the rights of refugees 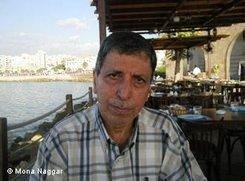 "No one knows what would happen to us if a Palestinian state were to be recognised," says Jabir Sleiman of the refugee organisation "Aidoun"

​​"The debate about the legal consequences of this plan among Palestinians, academics, and the media has not even got started," says Jabir Sleiman, co-founder of the organisation "Aidoun" (Return).

He is now working for the rights of refugees in Lebanon. Sleiman notices that there are a lot of unanswered questions: "What, for example, would be the consequences of issuing Palestinian passports to us 1948 refugees? Would we lose our refugee status and not be allowed to return to our villages, which we had to leave 63 years ago?"

The 66-year-old hails from a village to the south of Jaffa and has been living in Sidon in the Lebanon for decades. His commitment to the return of the refugees is still a priority issue for him, regardless of the Palestinian initiative to get a state recognised by the UN General Assembly.

According to Sleiman, the first and most important step would be for Israel to recognise the right of return of the 1948 refugees. In order for this to happen, there must be international political will to reach this goal. In this respect, Sleiman cites UN Resolution 194, which guarantees the return, compensation and return of property for Palestinian refugees: "We want to return to our native villages; we don't want to go just anywhere."

Home
Print
Newsletter
More on this topic
Interview with the Historian Moshe Zimmermann: ''One Has to Be in Favour of the UN Resolution''Lebanon's Sunni Palestinians: Victims of Peace
Related Topics
All Topics
Date:
Mail:
Send via mail

END_OF_DOCUMENT_TOKEN_TO_BE_REPLACED
Social media
and networks
Subscribe to our
newsletter