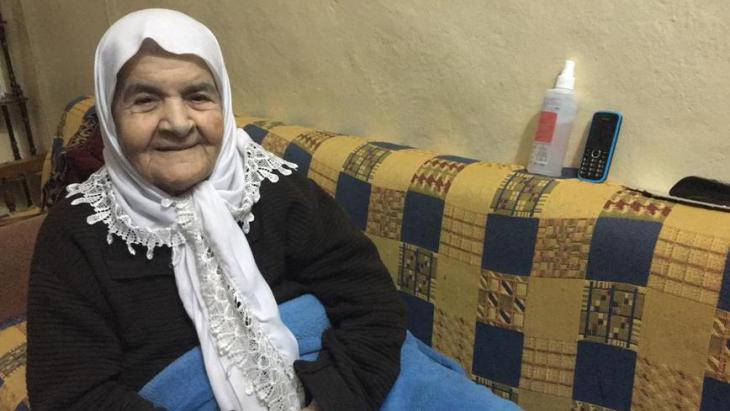 In May 1948, Israel declared its independence. Palestinians such as Hafida Khatib refer to this moment as the "Nakba" (catastrophe). Hafida and her family fled to Lebanon, a country that has never felt like home. Diana Hodali reports from Burj el-Barajneh south of Beirut

Following the outbreak of the Arab–Israeli War in 1948, 19-year-old Hafida Khatib and her family fled from the Palestinian village of Dayr al-Qassi to neighbouring Lebanon. "I have lived in Lebanon for 70 years, but I've never forgotten Palestine," says Hafida, who is now almost 90.

Today she lives in the Burj al-Barajneh refugee camp, which lies in the south of Lebanon's capital, Beirut. Camp residents like to quip that not even a coffin fits through its narrow streets. Many houses are run down and at risk of collapsing. Three years ago, Hafida moved into a small ground-floor apartment after her leg was amputated because of complications resulting from diabetes.

Hafida's apartment would be hard to find without someone leading the way through the cramped maze of homes. The camp was originally intended to temporarily shelter Palestinians, but it still exists today, having become a home for several generations of refugees. It has grown: official figures put the number of Palestinians living in the camp at more than 18,000. The more recent influx of Syrian refugees most likely means that 40,000 people now live here. About half of the residents are younger than 25 years old. And camp life is all that many know. 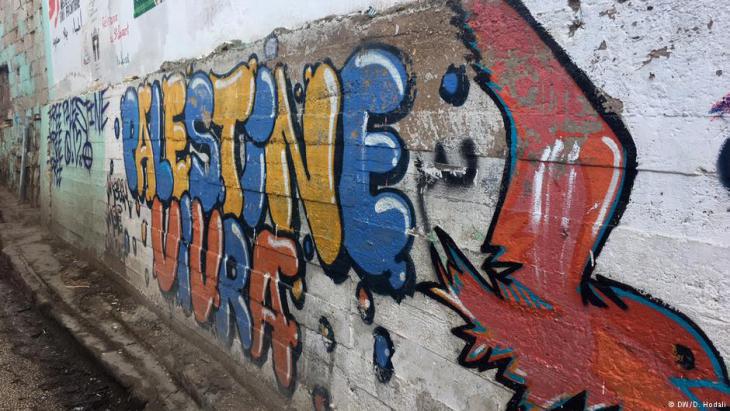 Graffiti on walls and banners hung up in every alleyway in the Palestinian refugee camp Burj el-Barajneh remind residents of what they or their parents and grandparents left behind in 1948. Two of the most frequent phrases to be seen are "Palestine Vivra" (Palestine will live – pictured here) or "Haq al-Awda" (right to return)


But Hafida vividly remembers a different life. She recalls Dayr al-Qassi, just 20 kilometres (12 miles) from the city of Acre in what is now northern Israel. "If I could return, I would know exactly where our house stood," she says, adding that she knows just how everything was: "our life, our land, the villages." And Hafida recalls how her father had told her they would not stay in Lebanon for long. "He said it would just be three or four weeks," she says with a melancholy expression, despite her warm smile. "We all really believed that." 70 years later, she is still in Lebanon.

Israel declared itself an independent state on 14 May 1948. The following day, 15 May, is remembered by Palestinians as the beginning of the exodus. They refer to this day as Nakba, which is Arabic for "catastrophe". On 30 October 1948, Israeli militias conquered Dayr al-Qassi.

By that time, Israeli forces had already been battling Egyptian, Lebanese, Syrian, Iraqi and Jordanian armies for several months. In previous weeks, hundreds of other Palestinian villages had already been taken over by the Israelis. Hafida's family was prepared. They had packed their bags. "We only took the bare necessities," she says. "We locked our door and set off." Hafida, her father and five siblings fled north, into Lebanon. Her mother had passed away when Hafida was still a little girl. "There was a Christian village next to ours. We used to tend the land together," Hafida says. "And our Jewish neighbours often came to visit. Sometimes they brought homemade yogurt." She says Muslims, Christians and Jews got on well: "None of our friends wanted us to flee, but we were very scared." 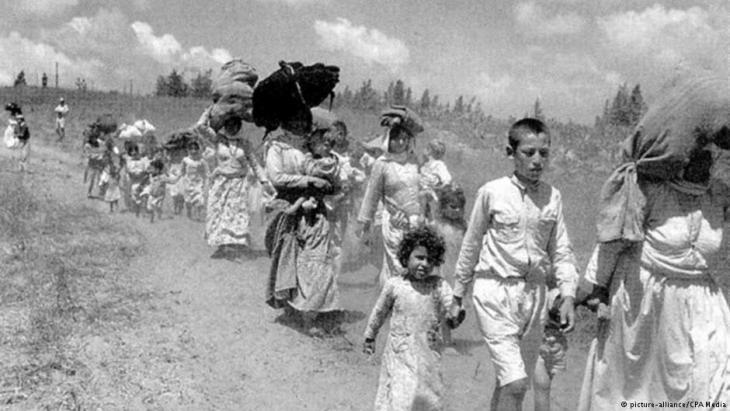 1948, the year of the "catastrophe" (Nakba) for the Palestinians: about 700,000 Palestinians fled following the foundation of the state of Israel. To this day, Israel does not allow refugees to return to its territory. It is estimated that there are now about 5 million refugees and their descendents


Those who did not flee were forced to leave. By May 1949, Israeli forces had taken all villages in the vicinity of Dayr al-Qassi. Today, only a few ruins of former houses remind passers-by that Palestinians once lived here. The villages were renamed. Dayr al-Qassi is now called Elkosh.

By the end of the war in 1949, 750,000 Palestinians had fled or been forced from their homes. Some took shelter in refugee camps in Gaza and the West Bank. Most, however, fled to neighbouring Lebanon, Jordan and Syria.

Hafida remembers her family's small house. She still has the key, but the house no longer exists. Today, she must contend with renting a dark apartment. Lebanon does not allow Palestinians to own land or housing.

After fleeing, Hafida married her cousin Ibrahim. They had 10 children. In 1978, Hafida, her husband and children moved to the camp, one of 12 in Lebanon, served and financed by the United Nations Relief and Works Agency for Palestine Refugees in the Near East (UNRWA). Lebanon does not contribute any funding to the maintenance of the camps. Hafida has been living on her own since her husband died eight years ago. She thinks life in the camp was not bad, "but we and my kids and had no real opportunity either."

Strangers in a strange land

Some of Hafida's children applied for asylum abroad. Her son Subhi Khatib now lives in Denmark. Two other children live in the United States. One of her sons died in 1976, in Lebanon's civil war, which fills Hafida with immense sorrow. She has a framed picture of him above the apartment door. Her other six children still live in the camp.

None of Lebanon's various governments were particularly welcoming of Palestinian refugees. The children of Palestinian refugees in Lebanon inherit their parents' status. That means that they may not take jobs that require an academic degree. Refugees are paid less than equally qualified Lebanese nationals. These restrictions were officially justified by arguments that Palestinians who become fully integrated into Lebanese society will find it harder to return to their homeland. 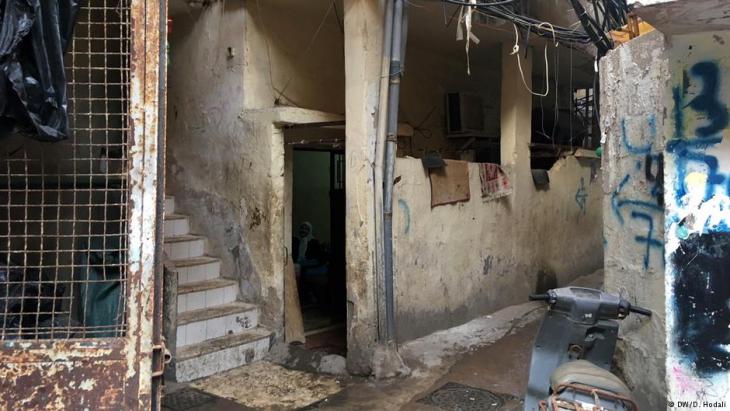 The entrance to the flat where Hafida Khatib lives in the Palestinian refugee camp Burj el-Barajneh, Lebanon. Despite the fact that she is almost 90 and very frail, Hafida would love to see her homeland one last time. "My dream is to spend one week in Palestine," she says. "I want to touch the soil and then be buried there"

Neither Hafida nor her children feel accepted by Lebanese society. "We don't want to live like long-term guests," says Hafida's son Subhi, who is visiting his mother. "We want to live with dignity in our homeland. I grew up with Palestine, I carry it in my heart." Subhi no longer wanted to live in Lebanon. He feels much more welcome in his new home of Denmark.


Hafida never wanted to move into Beirut proper. She prefers the refugee camp, which everyone here simply calls Burj, to the loud and bustling Lebanese capital. She likes that the camp residents are conscious of their heritage. "I always cooked Palestinian dishes for my children," Hafida says. "And they all speak Palestinian Arabic." She also told her children and grandchildren about the Nakba so that they, too, will never forget what happened. Subhi claims that "the UNRWA schools prohibit teaching the history of Palestine."

About 450,000 Palestinian refugees are registered with the UNRWA in Lebanon. The agency's coffers are very limited, especially now that President Donald Trump has cut the US's contributions .

Because she needs to use a wheelchair, Hafida rarely leaves her apartment. "The roads are bad," she says. "My children cook for me, and sometimes a lady comes over to help." It has been a long time since she visited the camp's market square, which some here mockingly refer to as "Piccadilly Circus".

Despite her age and frailty, Hafida would love to see her homeland one last time. "My dream is to spend one week in Palestine," she says. "I want to touch the soil and then be buried there." She knows that her last wish will never come true – even though international law and UN Resolution 194 officially grant her the right of return. In Israel, references to either fall on deaf ears.

Moncef Marzouki was Tunisia's first democratically elected president after the fall of dictator Ben Ali. Today he is the most prominent critic of increasingly counter- ... END_OF_DOCUMENT_TOKEN_TO_BE_REPLACED

Asef Bayat, professor of Sociology at the University of Illinois, Urbana-Champaign, has been studying revolutions and how they affect people since 1979. In his recent book, " ... END_OF_DOCUMENT_TOKEN_TO_BE_REPLACED

The 2020 Beirut port blast was a traumatic experience for many people in Lebanon. A large number sought therapy in the aftermath. But, with doctors leaving the country, help is ... END_OF_DOCUMENT_TOKEN_TO_BE_REPLACED

A pandemic, civil strife and an economic meltdown have conspired to bring Beirut's vibrant club scene to its knees. Yet the city needs parties more than ever. Kate Martyr reports END_OF_DOCUMENT_TOKEN_TO_BE_REPLACED

A group of 20 social media influencers in Lebanon is seeking to de-escalate political tensions and overcome sectarian problems. Their outreach is impressive among the young and ... END_OF_DOCUMENT_TOKEN_TO_BE_REPLACED

END_OF_DOCUMENT_TOKEN_TO_BE_REPLACED
Social media
and networks
Subscribe to our
newsletter