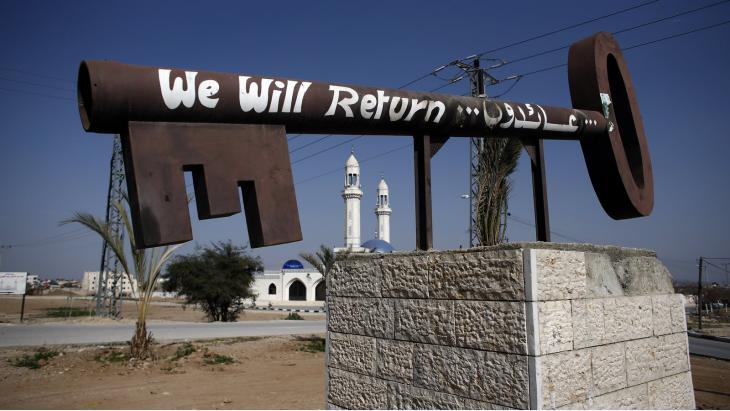 The number of internally displaced Palestinians is currently estimated to be around 300,000. A fact the Israeli government is keen to ignore. Hardly surprising, considering that acknowledging IDP rights of return would necessarily entail recognising the events of 1948 in their entirety. By Mona Bieling

Haifa′s abandoned Palestinian district of Wadi Salib is located between the lively Hadar area and the port. Within Wadi Salib, however, there is not much life left. The area′s inhabitants were driven out by the 1948 Palestine War – the Nakba ("Catastrophe") according to the Palestinian narrative – and were never allowed to return.

The resettlement of the area with Mizrahi Jews in the 1950s failed miserably and, ever since, Wadi Salib had been left to itself. Current plans to revive the area, however, have started to take form. The establishment of an Office for the Demobilised Soldier at one of Wadi Salib′s entrances, right next to the old cemetery, is just one of the great ironies of Israel and its dealings with its history.

″A minority within a minority″

The Palestinian refugee issue was created in the aftermath of the 1948 Nakba by the expulsion of 750,000 Arab citizens of Mandate Palestine by Jewish forces. However, during the same war, a second group of displaced people was created, one that has been widely absent from the public′s eye. This group consisted of approximately 25,000 Palestinians who were internally displaced during the 1948 war.

They were forced to leave their homes but managed to stay within the borders of the newly created state of Israel; after the war, they were prevented from returning to their homes. This group of people is often referred to as "internal refugees" or "internally displaced Palestinians (IDPs)" and makes up approximately one quarter of the Palestinian community within Israel today. 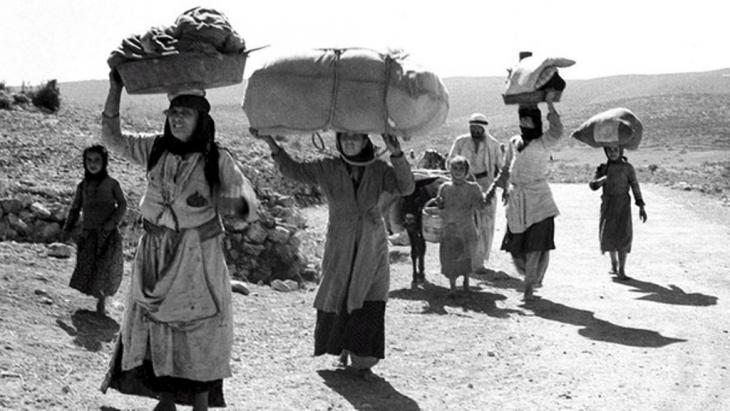 "Nakba" – flight and expulsion: in the 1948 Palestine War, Israel defeated the Arab states to take control of 77 percent of Palestine. The war is referred to in Arabic as "nakba" ("catastrophe"); hundreds of thousands of Palestinians were forced to flee

These IDPs, estimated to be around 300,000 people, are in a different category to the non-displaced Palestinians with Israeli citizenship because they have a distinct past that is connected to a unique set of demands. At the same time, they should not be treated the same as the Palestinian refugees either, as they are the only group of displaced Palestinians who have received Israeli citizenship.

Seemingly, the IDPs constitute "a minority within a minority". A healthy balance should be sought between, on the one hand, emphasising their uniqueness and addressing the injustices done to them and, on the other hand, placing their struggle within the struggle of the whole Palestinian community. In the end, alienating one Palestinian community from the other on the basis of the uniqueness of its fate will not advance, but rather impede, the struggle for justice that all Palestinians share.

Directly after the cessation of fighting in 1948, Israel established martial law over the whole remaining Palestinian population inside Israel, which stayed in place until 1966 and severely restricted the Palestinians′ range of movement and collective activities. Other measures taken by the Israeli authorities to prevent the return of IDPs included the declaration of abandoned villages as military zones, resettlement of the abandoned villages with Jewish settlers, destruction of remaining houses, or planting trees and renaming the villages to conceal their past.

The 1948 war left 167 Palestinian villages in the north abandoned or destroyed. Of the 70 remaining villages, 47 took in the 25,000 IDPs from a total of 44 villages. While the local Palestinians in the host villages were generally very receptive toward the people seeking refuge in their villages, when it slowly became obvious that a quick return of the IDPs was not possible, tensions emerged within the host villages.

Apart from the economic situation that discriminates against both local and displaced Palestinians equally compared to Jewish Israeli citizens, the IDPs do constitute a separate community within their host villages.

Firstly, the displaced communities have settled in distinct neighbourhoods or at the margins of the host villages. Staying within the close-knit boundaries of their extended family and village community, the displaced Palestinians have aimed at retaining their identity as a community originating from a different place and longing to return to it. At the same time, this geographical separation has prevented the genuine integration of the displaced into the local communities.

Songs of the dispossessed

After a long period of almost complete absence of the IDPs′ struggle in the political arena, they have become more vocal in the 1990s. In 1992, they established the Association for the Defence of the Rights of Internally Displaced Palestinians (ADRID) as their representative forum and functions until today. The association′s main goal is the full implementation of UN Resolution 194, which encompasses the right for return of the IDPs or compensation. Moreover, ADRID has emphasised that the IDPs constitute a unique group among the broader Palestinian community as they are both displaced and citizens of Israel.

A recent expression of this IDP identity can be found among youth activists from the displaced village of Iqrit. In 2012, third generation IDPs whose ancestors were displaced from Iqrit, returned to the village in order to resettle it. When this attempt failed and the youth were forcefully evicted two years later, they found another way of expressing their connection with their families′ unreachable home: They produced an album with music made of sounds from the village and lyrics about the village. In its entirety, this album is a unique and powerful testimony of the identity of the current generation of IDPs who still long for return.

Despite all this, Israel has always denied the IDPs a distinct identity within the Israeli society. Israel′s refusal to deal with the IDP issue separately is deliberate and reflects the unwillingness of the state to acknowledge the existence of this problem within its borders.

By neglecting the IDPs and denying their demands for return, Israel is missing out on a unique chance to restore justice and instead it continues to take measures that will most certainly hamper any peace negotiations in the future.

While the physical return of most IDPs would probably be possible, the crux of this matter lies, of course, in the ideological sphere. Acknowledging the right to return of the IDPs by Israel would entail the recognition of the events of 1948 in its entirety, including the process of ethnic cleansing that was carried out intentionally. A recognition like that, however, is still a dream that belongs to the distant future.

Home
Print
Newsletter
More on this topic
Interview with Sarit Michaeli from B′Tselem: Creeping annexationGaza – a city no one wantsNew peace initiatives for the Middle East conflict: Two states, one homeland
Related Topics
History of the Near and Middle East, Israeli settlement, Israeli-Palestinian conflict, Refugees
All Topics

Asmaa al-Atawna's debut novel "Missing Picture" has been published in German translation (Keine Luft zum Atmen – Mein Weg in die Freiheit). In it, she describes life in Gaza from ... END_OF_DOCUMENT_TOKEN_TO_BE_REPLACED

At the end of every year, the team at Qantara.de gives you a run-down of the ten most-read articles on the site over the past 12 months. Here is a quick overview of the stories ... END_OF_DOCUMENT_TOKEN_TO_BE_REPLACED

Palestinian Christians are an integral part of the Palestinian national movement. This is the conclusion reached by the Chilean-born Palestinian political scientist Xavier Abu Eid ... END_OF_DOCUMENT_TOKEN_TO_BE_REPLACED

Jesus – Issa in Arabic – doesn’t merely enjoy the highest place among the prophets in the Koran. He is also revered in Islam’s mystical tradition for his message of love and mercy ... END_OF_DOCUMENT_TOKEN_TO_BE_REPLACED

With reported hostilities against Israeli journalists and the flag of the Palestinian territories flying on the streets and in the stadiums, it is clear the World Cup in Qatar is ... END_OF_DOCUMENT_TOKEN_TO_BE_REPLACED
Author:
Mona Bieling
Date:
Mail:
Send via mail

END_OF_DOCUMENT_TOKEN_TO_BE_REPLACED
Social media
and networks
Subscribe to our
newsletter