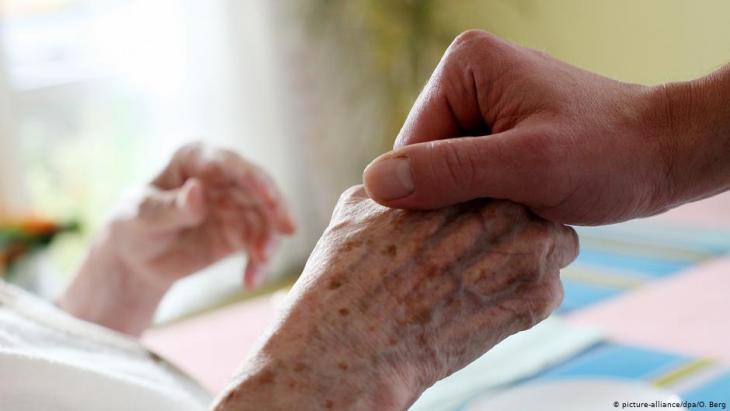 Germany is home to 21 million people with a migrant background. Hospices and providers of palliative care are adapting their practices to make them more inclusive. By Christoph Strack

Hussam Khoder, who has been a volunteer with the ambulatory care services at the Lazarus Hospice Berlin for seven years, will never forget the day in 2019 when a man from Iraq turned to him for help after checking his 7-year-old into a hospital. The man and his son had arrived in Germany after an arduous journey that involved crossing the Mediterranean Sea in the hopes of finding quality care for the boy, who was suffering from cancer. "The father had carried his son to Germany on his back," says Khoder.

Born to Palestinian parents in Lebanon, Khoder himself arrived in Germany when he was 20 years old. He was able to communicate with the man in Arabic and translated for doctors and caregivers who only spoke German. Khoder found a place in a palliative care home for the boy and read to the father and son from the Koran. "In the beginning, I would chat with the boy and play with him," says Khoder, who is 48. But the child grew weaker, and Khoder, who has two children of his own, then focused on assisting the father.

The doctors tried chemotherapy on the boy without success. As it became clear that the child had only weeks to live, Khoder and his agency succeeded in getting a permit for his mother to fly in from northern Iraq. After the boy passed away, she returned to Iraq with his body. "We consoled each other," says Khoder. 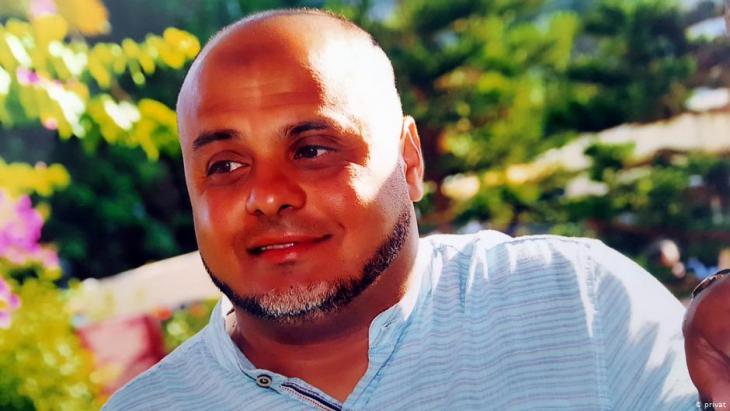 Hussam Khoder (pictured here) is 48 years of age and was born in Lebanon to Palestinian parents. He came to Germany at the age of 20 and has been a volunteer with the ambulatory care services at the Lazarus Hospice Berlin for seven years

A desire to help

Khoder is a laboratory assistant by training and began his work in palliative care in 2013, when he found a leaflet at a Berlin mosque. Helping appealed to him, and he discussed the matter with his imam. Khoder contacted Lazarus and began training to give palliative care. Islam places great value on people who tend to the sick, says Khoder, and Muslim families have increasingly sought inpatient and outpatient palliative care despite interpretations of the Koran that have led some to believe that sick people should be cared for by relatives in their homes.

About 30,000 people a year spend the last weeks or months of their lives in Germany's palliative care homes, according to the Federal Statistical Office. Now, the German Hospice and Palliative Care Foundation has highlighted the importance of making volunteers aware of cultural differences when tending to the terminally ill.

Run by the Hoffnungstaler Foundation in Lobetal, Lazarus is one of several palliative care providers that specialise in tending to people from different cultural backgrounds. German health care insurers cover 95 per cent of the costs for terminally ill patients at hospices, which fund the remaining 5 per cent through donations. To be admitted, patients must submit a hospice referral from a doctor and prove that they have health insurance. 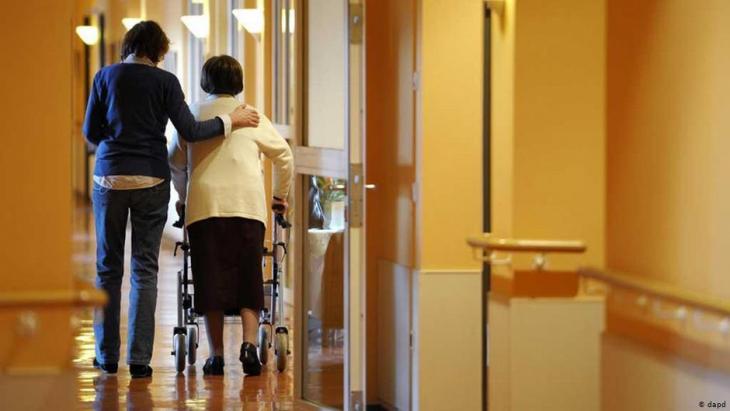 According to Elizabeth Schmidt-Pabst, a 43-year-old nurse who manages volunteers for a German palliative care provider, volunteers are the "backbone of outpatient hospice care". According to the Federal Statistical Office, about 30,000 people a year spend the last weeks or months of their lives in Germany's palliative care homes

Elizabeth Schmidt-Pabst, a 43-year-old nurse from the United States who has lived in Berlin for over 20 years, manages volunteers for Lazarus. The agency runs a programme for people who may require care attuned to their cultural needs. The website offers information in German, Turkish, Polish, Arabic and English, and volunteers tend to Berlin's diverse communities in languages that patients can understand — from Vietnamese to Romani.

"We often receive calls when people are on their own and in need of someone who speaks their native language," says Schmidt-Pabst. She adds that the ability to communicate with caregivers is often more important to patients than receiving assistance specific to their religions.

Schmidt-Pabst says many patients from abroad arrive in Germany with high expectations of health care in this country. Though doctors in Germany do their best for patients, she says, sometimes nothing helps. In such cases, patients will receive the best possible palliative care to treat the pain and other symptoms rather than attempt in vain to cure them. Schmidt-Pabst says communicating the hospice's approach to patients can sometimes prove complicated.

Lazarus tends to about 150 patients per year, says Schmidt-Pabst, about one in four of whom were born abroad or had a parent or grandparent who was. Outpatient palliative care is free for patients. This service generally includes counselling, assistance and referrals to different doctors. German hospitals partially fund these services. Yet "volunteers form the backbone of outpatient hospice care," says Schmidt-Pabst, adding "we are always looking for volunteers to join, like all palliative care agencies." 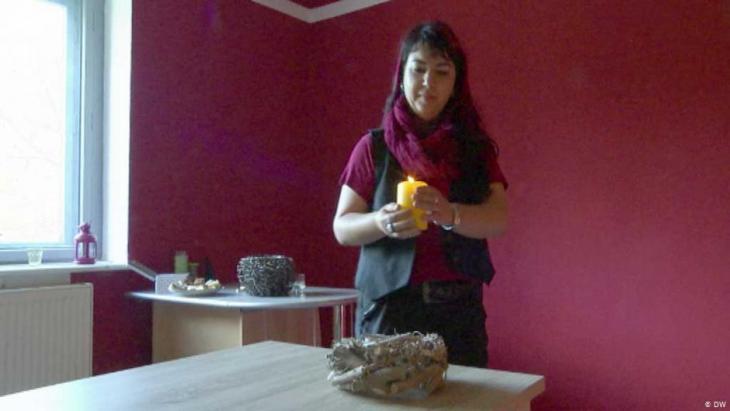 According to the WHO, palliative care is an approach that "improves the quality of life of patients and their families facing the problem associated with life-threatening illness, through the prevention and relief of suffering by means of early identification and impeccable assessment and treatment of pain and other problems, physical, psychosocial and spiritual." It is, therefore, essential that staff and caregivers have the relevant language skills, cultural sensitivity and awareness to engage with diverse communities

It has been a busy decade for advances in palliative care in Germany. A decade ago, about 50 palliative care agencies wrote and signed a charter on caring for gravely and terminally ill patients in Germany. The document emphasises that every patient holds unique value.

In 2017, the Federal Ministry for Family Affairs, Senior Citizens, Women and Youth convened a panel on the intercultural aspects of palliative care. In 2019, a group of medical researchers from Göttingen University published a comprehensive report on intercultural hospice and palliative care. They concluded that people who were born abroad or have at least one parent or grandparent who was born outside Germany tend to use hospice and palliative services less than other Germans. The researchers urged a greater focus on ensuring that medical staff and caregivers possess the relevant language skills, cultural sensitivity and awareness to engage with diverse communities.

In 2018, Rabia Bechari, a Muslim nurse and emergency caregiver who began her career in Germany's Christianity-based medical organisations, co-founded an organisation focused on intercultural and religious awareness in palliative care in the western city of Offenbach. "We trained up 15 volunteers until March," says Bechari. "But then the coronavirus pandemic hit."

Bechari says there is great need for Muslims in hospice and palliative care in Germany. "It is overdue that we provide this service," she says.

Home
Print
Newsletter
More on this topic
Where are the Islamic chaplains? No pastoral care for Muslims in Germany's armed forcesInterview with the Islam scholar and law professor Mathias Rohe: Coronavirus prompts German discussion on the call to prayerAladin El-Mafaalani's "Das Integrationsparadox": Demanding a seat at the table
Related Topics
Freedom of religion, Humanitarian aid, Integration in Germany, Islam in Germany, Mosques in Germany, Muslim associations in Germany
All Topics

It is possible to write about the Holocaust and the crimes of colonial powers without downplaying anything. In her latest book, Charlotte Wiedemann focuses on the numerous blind ... END_OF_DOCUMENT_TOKEN_TO_BE_REPLACED

This year Annemarie Schimmel, the great German scholar of Islamic studies, would have turned 100. Unique within the German and international academic community of her time, ... END_OF_DOCUMENT_TOKEN_TO_BE_REPLACED

The highly controversial Indian blockbuster "The Kashmir Files“, on the exodus of Kashmiri Hindus in the 1990s, is characterised by unilateral representations, negative ... END_OF_DOCUMENT_TOKEN_TO_BE_REPLACED

Asked about the Shoah, Palestinians often bring up the Nakba, the displacement of Palestinians associated with the founding of the state of Israel. An Israeli Holocaust researcher ... END_OF_DOCUMENT_TOKEN_TO_BE_REPLACED

END_OF_DOCUMENT_TOKEN_TO_BE_REPLACED
Social media
and networks
Subscribe to our
newsletter