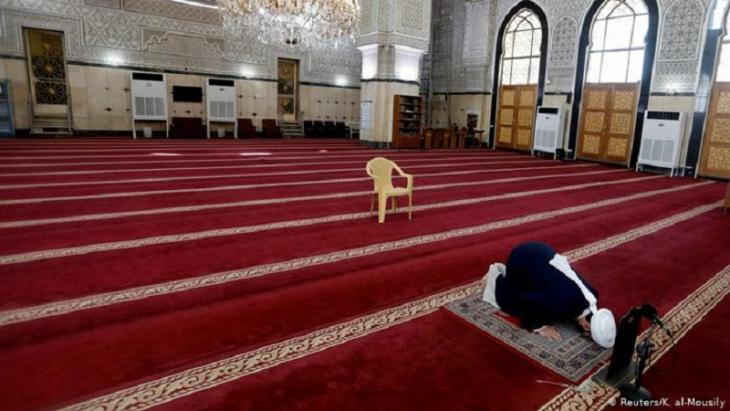 While some are beginning to protest the lockdown, others are unable to bury their loved ones in accordance with Islam. Here’s the latest from across the region

Algeria will impose a curfew in nine more provinces to limit the spread of the coronavirus, the prime minister's office said last Friday. At the beginning of this week the government imposed a curfew in the capital and a full lockdown in the neighbouring province of Blida.

Several hundred Tunisians demonstrated in a working class district of the capital on 31 March, demanding government support and protesting a week-old lockdown against the coronavirus pandemic that has disproportionately impacted the poor. "Never mind coronavirus, we're going to die anyway! Let us work!" shouted one protester.

The European Union has granted Tunisia 250 million euros in aid to help it cope with the economic and social effects of the coronavirus outbreak, EU ambassador Patrice Bergamini said on Saturday in a tweet.

Tunisia, which suffers from limited health infrastructure, is fighting to contain the outbreak after it said it had 312 confirmed cases and ten deaths. Prime Minister Elyes Fakhfakh said last week that the government was allocating $850 million to combat the economic and social effects of the health crisis.

Five more cases of coronavirus have been confirmed in Libya taking the total to eight.

The National Centre for Disease Control said the new cases were in the north-western city of Misrata, held by the Government of National Accord (GNA) which is at war with the Libyan National Army (LNA) of eastern-based commander Khalifa Haftar. In chaos and without central authority since the 2011, Western-backed uprising that ousted strongman Muammar Gaddafi, Libya is poorly placed to withstand any epidemic.

Egyptian banks have been instructed to apply temporary limits on daily withdrawals and deposits in a move seemingly designed to control inflation and hoarding during the coronavirus' spread.

The daily limit for individuals would be 10,000 Egyptian pounds ($635) and 50,000 pounds for companies, a central bank statement said, though businesses will be exempt from the withdrawal limits if the money is used to pay employees. The central bank has also limited daily ATM withdrawals and deposits to 5,000 pounds, it said in a statement.

Egypt will extend a suspension of flights for two weeks from 1 April, the minister for state information said on 31 March. Flights at Egyptian airports were suspended on 19 March and the stoppage had been due to last until the end of the month. Flights allowing tourists to return to their countries have been allowed to continue.

"The people aren’t ready for democracy" has been the constitutional basis for Arab tyranny, its favourite slogan and its sacred narrative for more than a century. Yet, asks Khaled ... END_OF_DOCUMENT_TOKEN_TO_BE_REPLACED

As current events continue to remind us, people all over the world are constantly being forced into exile. "Songs of Exile", created by Algerian Berber exile Abderrahmane Abdelli ... END_OF_DOCUMENT_TOKEN_TO_BE_REPLACED

A new survey by Arab Barometer adds numbers to the narrative that COVID has led to a harsher reality for women in the Middle East and North Africa. By Jennifer Holleis and Razan ... END_OF_DOCUMENT_TOKEN_TO_BE_REPLACED

Algerian scholar Said Djabelkhir rejects the charge of "offending Islam". In interview with Ismail Assam, he maintains that he has been wilfully misconstrued. At the same time, he ... END_OF_DOCUMENT_TOKEN_TO_BE_REPLACED

The Libya Conference will be held in Berlin on 23 June. Much has been achieved since the last Libya Conference in Berlin in January 2020. The ceasefire is holding, there is a ... END_OF_DOCUMENT_TOKEN_TO_BE_REPLACED
Date:
Mail:
Send via mail

END_OF_DOCUMENT_TOKEN_TO_BE_REPLACED
Social media
and networks
Subscribe to our
newsletter