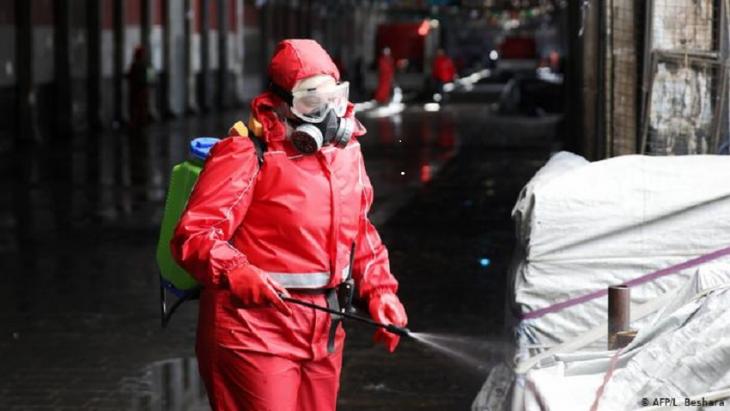 Coronavirus continues unabated. Iran remains a hub of infection, war-torn Syria has recorded its first case and Yemen is bracing itself for the worst. Here’s the latest from across the region

Morocco declared a health emergency on 20 March and is restricting movement across the country to prevent the further spread of the coronavirus. People may only leave their homes to buy food or medicine or go to work after receiving a permit from the authorities.

"The health emergency does not mean stopping the economy," said the interior ministry, noting that banks, fuel stations and other critical businesses will be able to operate.

Algeria has reported 62 new coronavirus cases, bringing to 201 the total number of people infected with the virus, the health ministry said on 22 March. It said a total of 110 cases were recorded in the Blida area, south of the capital.

Tunisia's president ordered a general lockdown on 20 March, limiting citizens' free movement in an effort to curb the spread of the coronavirus. "All of Tunisia is united in this dangerous war. The war has a cost and the exceptional decisions that we announced have a cost, but we have no choice", Fakhfakh said in speech.

The government will provide 450 million dinars in financial aid to poor families and Tunisians who have lost their jobs due to the coronavirus crisis.

Libya's internationally recognised Government of National Accord in Tripoli has ordered a curfew from 6 p.m. to 6 a.m. to help prevent coronavirus infections, it said in a statement on 21 March.

Libya has not officially confirmed any cases of the coronavirus inside its borders.

Egypt has ordered mosques and churches to shut their doors to worshippers in an effort to curb the spread of the coronavirus, after calls for the government to follow steps taken by neighbouring countries.

The North African country reported nine new coronavirus cases and two fatalities on Saturday, the health ministry said in a statement, bringing the totals to 294 confirmed infections and 10 deaths.

Sudan confirmed its second case of coronavirus on 20 March in the capital Khartoum, as Khartoum state announced a range of measures to prevent the spread of the disease.

Khartoum state has decided to ban all mass gatherings including religious celebrations and rallies, as well as to close wedding halls and sports venues and shisha (water pipe) cafes, the agency said.

Sudan announced its first, fatal case of coronavirus a week ago. The country has closed airports and borders to guard against the illness.

Turkish authorities will seize factories of mask-producing firms unless they agree to sell products to the government by Monday night, Interior Minister Suleyman Soylu was quoted as saying, as Ankara seeks to contain the local coronavirus outbreak.

Turkey's death toll from the virus increased by nine to 30 on Sunday, with 1,256 confirmed cases after a surge in the last two weeks.

Authorities carried out simultaneous raids on the depots of all face mask producers in Turkey early on Sunday to demand they sign contracts with the Health Ministry and stop hoarding stock, Soylu was cited as saying by the Hurriyet newspaper.

Chinese President Xi Jinping's visit to Saudi Arabia in December 2022 may have rattled Washington, but it simply highlighted the Arabs’ desire to diversify their foreign relations ... END_OF_DOCUMENT_TOKEN_TO_BE_REPLACED

Nouara may be 65, but she is ready to join thousands of others who burn their ID and pay traffickers for the chance of a new life in Europe. Zineb Bettayeb reports END_OF_DOCUMENT_TOKEN_TO_BE_REPLACED

In Doha, Arabs from Morocco, Tunisia, Egypt and Algeria are gathering to celebrate the first ever FIFA World Cup to be held on Arab soil. The criticism from Europe? Over the top, ... END_OF_DOCUMENT_TOKEN_TO_BE_REPLACED

"Rebel Game: The Power of Football in the Middle East and the Qatar World Cup", an anthology published by Middle East researchers Jan Busse and Rene Wildangel, takes the upcoming ... END_OF_DOCUMENT_TOKEN_TO_BE_REPLACED

After a two-year hiatus, the Arab League re-convened at the beginning of November in Algiers against a backdrop of uncertainty and discord. By Pierre Boussel END_OF_DOCUMENT_TOKEN_TO_BE_REPLACED
Date:
Mail:
Send via mail

END_OF_DOCUMENT_TOKEN_TO_BE_REPLACED
Social media
and networks
Subscribe to our
newsletter