"Panic" on Pakistani markets as rupee slides further against US dollar 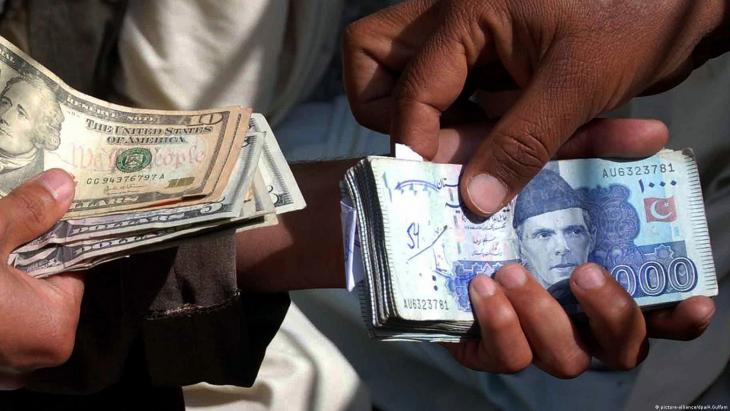 The Pakistan rupee slid further against the US dollar on Wednesday, as the local foreign exchange association warned that panic was spreading through the currency market following the sharp declines this week.

The rupee fell 2% on Monday, and 3% on Tuesday, despite last week's staff level agreement reached with the International Monetary Fund (IMF) that would pave the way for a disbursement of $1.17 billion under resumed payments of a bailout package.

On Wednesday morning the rupee was trading at 225 per dollar, having ended Tuesday at 221.99 after Fitch ratings agency revised its outlook for Pakistan sovereign debt from stable to negative – though it affirmed Long-Term Foreign-Currency and Issuer Default Rating at "B-".

"There is panic in the market, I fear it (the rupee) will go down further," said Zafar Paracha, secretary-general of a foreign exchange association, the Exchange Companies of Pakistan.

Paracha said he did not see any reason for the depreciation in the rupee other than possible IMF pre-conditions. Neither the government or the IMF have said anything about the need for any further depreciation of the currency, though Pakistan recently adopted a market-based exchange rate under advice from the IMF under the economic reforms agenda.

"The recent movement in the rupee is a feature of a market-determined exchange rate system," the State Bank of Pakistan said in a series of Twitter posts late on Tuesday night, adding that the rupee's depreciation against the dollar is in large part a global phenomenon.

Pakistan faces economic turmoil, with fast depleting foreign reserves, a declining currency and widening fiscal and current account deficits, and the rupee has lost 18% of its value since December 2021.

Reserves have fallen to as low as $9.8 billion, hardly enough to pay for 45 days of imports.

Pakistan has also passed through another bout of political instability, with the government of Prime Minister Shehbaz Sharif taking over from ousted premier Imran Khan in April.

END_OF_DOCUMENT_TOKEN_TO_BE_REPLACED
Social media
and networks
Subscribe to our
newsletter