The Iranian artist Parastou Forouhar's parents were murdered eleven years ago. She has been fighting ever since, for a conviction of their killers and against the system in Iran – including through her art. Werner Bloch on a courageous artist

​​ Ideally, she'd like to stay right where she has spent the last few days: in front of her computer. The 47-year-old artist Parastou Forouhar has been searching the internet non-stop in an attempt to picture the situation in Iran, talking to friends on the telephone, writing emails and constantly worrying that the violence in her country will further escalate.

"Things have got much worse since Ahmadinejad took office," she says. "Before him, there were spaces for freedom and creativity, for example in the art scene. All this has been suppressed little by little."

Of course, Parastou Forouhar adds, the artists are trying to create new spaces for themselves on the internet. But the government is trying to put up new barriers there too, she regrets. "It's all red lines you're not allowed to cross; you have to observe the official version."

With her black cropped hair and marked features, Parastou Forouhar is one of Iran's best known artists. She has been living in Frankfurt am Main, Germany, since 1991, having previously studied art in Teheran. She has taken part in numerous international exhibitions, repeatedly addressing the subjects of women and human rights in her country of origin. 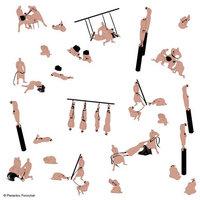 'Guilt without penance': Parastou Forouhar's parents were brutally murdered in 1998. This experience has coloured her work ever since

​​The Islamic Republic's iron grip is particularly unbearable for Parastou Forouhar. On 21 November 1998 her parents, both key players in the political opposition, were murdered by secret service men – brutally stabbed dozens of times over, presumably as a warning to other opposition politicians. This was the start of the "chain murders", which prompted great international consternation.

Ever since that date, Forouhar has been fighting to have the people responsible for the killings convicted. She has filed countless court suits, presented evidence, written numerous articles and letters. She has even made a documentary based on this material, Chronicle of the Murder of our Parents. She has documented her research findings on the internet and achieved some measure of success: a total of 18 individuals have been put on trial to date, with some of them sentenced.

The Iranian information ministry has had to admit that secret service employees were involved in the murders. In a case before a military tribunal, defendants were sentenced to imprisonment, and in two cases received the death penalty. The men were not executed, however, as Parastou Forouhar is against capital punishment.

Yet it is only the little people who have been punished. Forouhar is disappointed with progress to date: "The people who gave the orders and the ones behind political murders like this, who had dissidents in Iran killed for many years, have been left untouched!" Although a number of the defendants stated in court that they received orders from the minister himself, no consequences have ensued from these statements.

The main suspect, a deputy to the information minister, allegedly committed suicide in prison. 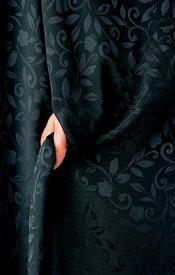 ​​So Parastou Forouhar continues to fight for justice – including by artistic means. Despite incredible obstacles, she still exhibits her work in Iran.

She once wanted to show a series of photos in a large Teheran gallery: men with shaven heads, wearing chadors. The government reaction was prompt – two days before the opening, the gallery owner received a call from the ministry of culture with the "recommendation" that she cancel the exhibition.

"That means a gang of thugs might come by and smash everything to pieces," says Forouhar. "It certainly means difficulties. So the gallery owner and I sat down and thought about what we could do." The solution was ingenious: "We cut the pictures out of the frames and only showed the empty outlines at the opening." The exhibition was a success, with visitors even buying the missing pictures. Everyone knew exactly what the works were about.

Small subversive acts like this are not the only way Parastou Forouhar takes action against the system. She wants to show the absurdity of the Islamic Republic and expose its ugly side: for example revealing that of torture and violence through a flip-book in which the reader unexpectedly finds they have replayed a violent scene.

Nobody is innocent, says Parastou Forouhar, not even observers. Her art has certainly made a lasting impression on the image of the Islamic Republic.

"Non-Western Modernities"
Veiled Artistic References
"Mahrem – Footnotes on Veiling" is the title of a new art exhibition which can be seen in Germany until the beginning of August. Turkish sociologist Nilüfer Göle conceived the exhibition as a way of exploring the ambivalence of veiling and its changing cultural symbolism. Ariana Mirza reports

END_OF_DOCUMENT_TOKEN_TO_BE_REPLACED
Social media
and networks
Subscribe to our
newsletter