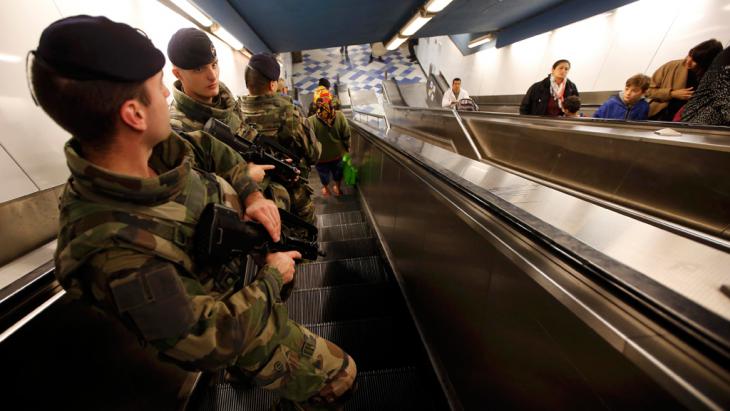 The latest attacks by IS are an attempt to exploit societal rifts at the heart of Europe. Without a concerted effort to address deep-seated and justified concerns relating to domestic social and economic policy, France′s retaliatory strikes are likely to achieve little. By James Dorsey

Stadia have re-emerged as a preferred jihadist target in the wake of this month′s Islamic State (IS) bombing of the Stade de France stadium, a shoot-out five days later with jihadist militants in a Paris suburb adjacent to the stadium, a reportedly foiled plot against a stadium in the German city of Hanover barely an hour before the German national team was scheduled to play, the cancellation of a friendly between Belgium and Spain, and France′s banning of fans from travelling to matches for the next three months.

The targeting of stadia spotlights jihadists′ often convoluted relationship with football. Many jihadists see football as an infidel creation designed to distract the faithful from fulfilling their religious obligations. Yet, many of them are football fans or former, failed, or disaffected players who see the sport as an effective recruitment and bonding tool.

In a perverse way, France′s decision to ban fans from travelling to their team′s away matches recognises football′s utility as a mobiliser. A successful attack on a football match would go a long way to achieve IS′s goals of polarising communities, exacerbating social tensions, and driving the marginalised further into the margins.

French fears are grounded in a degree of alienation among segments of youth with an immigrant background, that has prompted them to refuse to support the French national team in a manifestation of their sense that there is no equal place for them in French society. 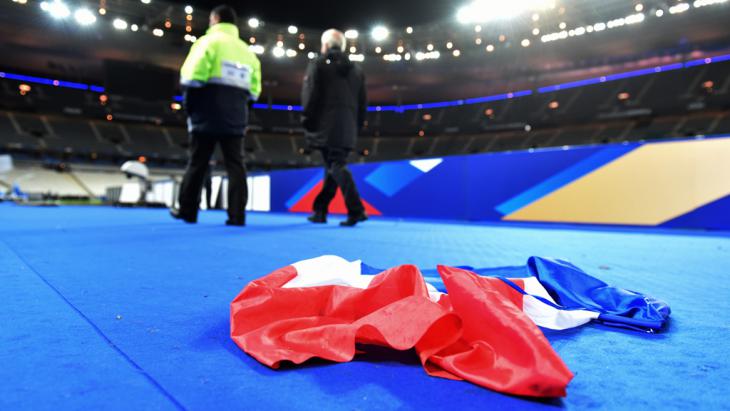 Convoluted relationship: "many jihadists see football as an infidel creation designed to distract the faithful from fulfilling their religious obligations. Yet, many of them are football fans or former, failed or disaffected players who see the sport as an effective recruitment and bonding tool," writes Dorsey

French fears are also rooted in a history of immigrant football violence, irrespective of whether the French team wins or not, dating back to France′s winning of the World Cup in 1998 with a team that brought together a generation of players who all had their origins outside France - widely seen as a symbol of successful French integration of minorities. Days earlier, police in France and four other European countries had arrested 100 people of Algerian descent associated with the Groupe Islamique Arme (GIA), a militant Islamist group fighting in Algeria′s civil war in the 1990s that left at least 100,000 people dead.

Eleven years later, some 12,000 youths of Algerian descent poured onto the Champs Elysees for celebrations to celebrate Algeria′s defeat of Egypt in the Sudanese capital of Khartoum, rather than support France, which was preparing for a crucial World Cup qualifier against Ireland. The celebrations degenerated into clashes with police, prompting a student to tell Andrew Hussey, a scholar who has charted French-North African relations and the football politics of French communities of North African origin: "I can′t believe it. I′ve never seen anything like it. It′s not just about football. It has to be about something else."

Mr. Hussey argued in The Guardian that the riots were not simply about perceived racism in France, but harked back to French colonial rule that viewed Algeria as an integral part of France, yet treated Algerians as second class citizens.

More recently, fans with a migrant background and police clashed last year in Paris and Marseille after Algeria beat Russia to advance to the 2014 World Cup finals in Brazil.

It is those kind of societal divisions that IS targeted with its attack two weeks ago on the Stade de France and its alleged plots in Germany. In doing so, IS is seeking to exploit a perception of prejudice, discrimination and abandonment that stretches far beyond France and is not restricted to communities that feel disenfranchised and hopeless.

Ironically, that may have failed, with French and other Muslims far more assertive in their condemnation of the Paris attacks than of the assault in January on the French satirical magazine Charlie Hebdo and a Jewish supermarket.

Mixed, however, with the abhorrence felt by French Muslims at the carnage in Paris, is a sense among many that Muslims are being stereotyped and targeted, whether at home or in countries far and near. A French Muslim office worker quotes his daughter as asking him after returning from school: “Why am I to blame? What did I do? I′m French. Yet, I′m denounced as a terrorist while they bomb Muslims in Syria and Iraq.” 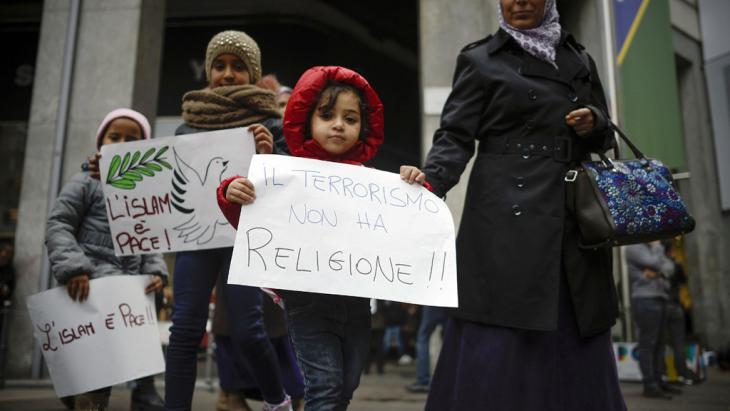 A French taxi driver of Algerian descent quips: “Nothing justified what happened. These people are beasts. But France and others can′t go round the world bombing countries and leaving ordinary people to pick up the pieces. It′s logical that there would be a reaction. This, however, was not the way to do it.”

Turkish fans booed this week during a minute of silence in honour of the Paris victims at the beginning of a match in Istanbul between Turkey and Greece, attended by the Turkish and Greek prime ministers and intended to seal Turkish-Greek reconciliation. Boos and jeers were also heard during a minute′s silence in Dublin at a Euro 2016 play-off between Ireland and Bosnia and Herzegovina.

The sense of an international community that measures with different yardsticks is deeply felt across the globe, including by Syrians fleeing civil war and Lebanese who suffered an IS bombing‎ a day before the attacks in Paris that shook the world. Forty people were killed in the Beirut bombing.

″When my people died, no country bothered to light up its landmarks in the colours of their flag,″ wrote Elie Fares, a Lebanese doctor. He was referring to landmarks as far flung as Sydney′s Opera House and London′s Big Ben that were lit up in France′s tricolore to honour the victims of the Paris attacks and express solidarity.

″When my people died, they did not send the world into mourning. Their death was but an irrelevant fleck along the international news cycle, something that happens in those parts of the world,″ Fares added, suggesting that Arab lives mattered less. 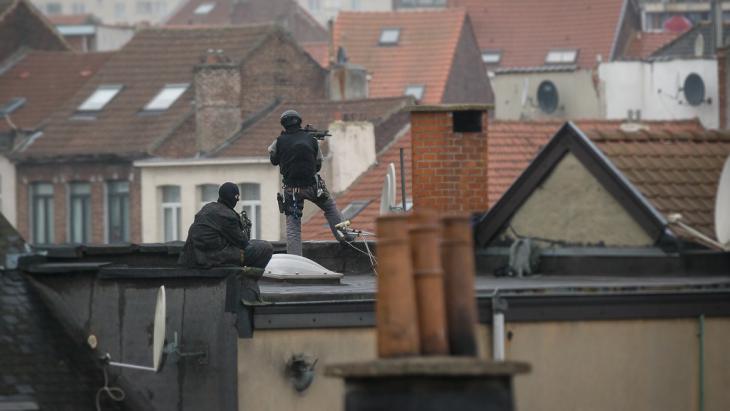 "The sense of abandonment expressed‎ by Fares and Kabbach is equally deeply felt in the Brussels suburb of Molenbeek that has repeatedly popped up as an important link in IS′s European network. Unemployment ranges from 30 to 50 percent in Molenbeek, treble Belgium′s national average," adds Dorsey

Writing on Facebook, against the backdrop of the outpouring of sympathy in the wake of the Paris attacks, Nour Kabbach, a Syrian ‎refugee from Aleppo said: ″Now imagine all that happening without global sympathy for innocent lives, with no special media updates by the minute, and without the support of every world leader condemning the violence.″

‎The sense of abandonment expressed‎ by Fares and Kabbach is equally deeply felt in the Brussels suburb of Molenbeek, which has repeatedly popped up as an important link in IS′s European network. Unemployment ranges from 30 to 50 percent in Molenbeek, treble Belgium′s national average.

″Religion is not the main access point (to radicalisation). It is that they cannot see any future for themselves,″ Jamal Ikazban, a left-wing Belgian lawmaker of Moroccan descent and resident of Molenbeek, told The New York Times.

French officials and analysts privately concede that, unless military efforts are embedded in social and economic policies at home that address deep-seated and justified concerns, retaliatory French air strikes are likely to do little to defeat IS. ″We are in a period of elections. The strikes have everything to do with domestic politics at a time when IS has given the far-right a tremendous boost. They are not going to make a difference on the ground in Syria,″ said one analyst.

James M. Dorsey is a senior fellow at the S. Rajaratnam School of International Studies, co-director of the University of Wuerzburg′s Institute for Fan Culture, a syndicated columnist, and the author of ″The Turbulent World of Middle East Football″ blog and a forthcoming book with the same title.

Home
Print
Newsletter
More on this topic
Karim Benzema: The boy next doorCuspert the IS terrorist: Mortal dreams of paradiseFrench reactions to IS terror: "What next? Will we ask Muslims to kneel?"
Related Topics
'Islamic State' | IS, Assad regime, Charlie Hebdo, Clash of civilisation, Democracy and civil society, European Islam, Football and integration, Jihad, Jihadism | Jihadists, Multiculturalism, Muslims in the West, Radicalisation, Syrian Civil War
All Topics

On 24 November 2019, the International Consortium of Investigative Journalists (ICIJ) – along with 17 media partners from 14 countries around the world – published the "China ... END_OF_DOCUMENT_TOKEN_TO_BE_REPLACED

The refugee crisis on Turkey's borders can only be resolved with a new EU deal. It should build on the current plan, but avoid its flaws, writes Ozgur Unluhisarcikli of the German ... END_OF_DOCUMENT_TOKEN_TO_BE_REPLACED

Children’s books shape the way we see the world as we grow up. In recent years calls have been growing for European publishers to reflect the increasing diversity. By Sonja ... END_OF_DOCUMENT_TOKEN_TO_BE_REPLACED

Germany and other member states of the European Union are for the first time making use of the so-called INSTEX mechanism to circumvent the sanctions imposed on Iran by the United ... END_OF_DOCUMENT_TOKEN_TO_BE_REPLACED

The coronavirus pandemic has disrupted social and economic life across the globe. But in the Middle East, authorities have coupled religious edicts with public health advice to ... END_OF_DOCUMENT_TOKEN_TO_BE_REPLACED

In the face of COVID-19, we need to admit the political mistakes of recent years and adjust our trajectory according to the compass of reality. People around the world – ... END_OF_DOCUMENT_TOKEN_TO_BE_REPLACED
Author:
James Dorsey
Date:
Mail:
Send via mail

END_OF_DOCUMENT_TOKEN_TO_BE_REPLACED
Social media
and networks
Subscribe to our
newsletter