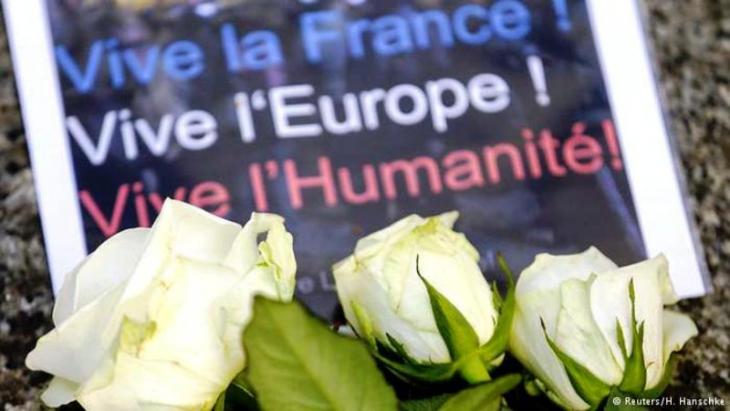 Following the January attack on "Charlie Hebdo," Paris has become the target of terrorist attacks for the second time this year. The cold-bloodedness of the assailants has shocked the French. One day later, Barbara Wesel reports from the French capital with her impressions

Standing at the corner of Rue Oberkampf and Boulevard Richard Lenoir in Paris on Saturday is like having a deja-vu experience. Barriers, police cars, armed anti-terrorism units on one side and on the other, an assortment of television production trucks, cameras and journalists looking for people to talk to.

The situation at the beginning of January has repeated itself, and not all that far from the site of the attacks on the satirical magazine "Charlie Hebdo." For the bloodiest and most brutal episode of Friday evening's series of co-ordinated terrorist attacks took place behind the nearest block of houses: at the Bataclan concert hall on Boulevard Voltaire.

It is expected that the number of victims will continue to rise, as many severely injured people are still in critical condition in Paris hospitals. And no one knows whether the terrorist group might strike again in the course of the day or the evening - as was the case in January.

Life goes on in the midst of grief

Around noon, the first Parisians arrive with flowers that they place beside the barriers. The popular Club Bataclan, site of last night's bloodbath, can be seen only in the distance. In front, the police have set up a huge mobile laboratory where the remains of dead victims will be identified.

People are still missing. Crisis hotlines are overloaded, and hotline staff are unable to answer many of the questions they receive. Desperate parents are still searching hospitals for their children.

Traffic continues to flow on the lane of the boulevard that has remained open. Headlines such as "Shock and Horror" can be seen on the front pages of the morning papers. For residents in the neighbourhood, however, it's business as usual. 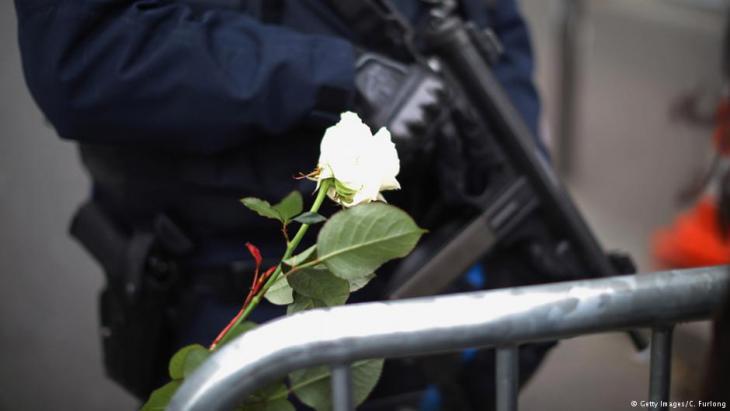 "Shock and horror": according to President Hollande, France is now at war following the attacks in Paris which killed at least 129 people. There were three groups of assailants, which attacked in an apparently pre-meditated and co-ordinated manner on Friday evening. Simultaneously they targeted the Bataclan concert venue, the Stade de France football stadium and a number of restaurants and bars, gunning down guests and passers-by indiscriminately

The young butcher in his shop carves the veal into pieces, shrugs his shoulders and asks, "What can you do about this insanity?" He is no more concerned than he was before; if someone were to storm into his shop with a firearm, he wouldn't be able to do anything about it anyhow, he says. Does he hate Muslims? "No, that is nonsense; it's just a few crazy people." And butcher Oliver also does not believe that the government is to blame. "What are they supposed to do about it? Put a cop behind every tree? Life goes on," he says, summarising the situation. He is calm, and rather fatalistic.

It could have happened to anyone

The owner of the wine shop next door on Rue Oberkampf also does not blame Hollande's government. "They have taken sensible measures," he says. Like his neighbour, the butcher, Cyril says that the police cannot shadow everyone. He lives in the neighbourhood, just around the corner from the restaurant "Le Petit Cambodge," where gunmen shot over a dozen people in the first stage of the killing spree.

"Friends of mine had just come over for dinner yesterday, and we heard this "pop-pop-pop" sound. And I even said, 'Who are those idiots? It's not 14 July, the national holiday.' But we quickly realised that those were real shots fired from an automatic firearm and not fireworks. And then I thought, 'My friends – if they had come a half an hour later, they could be dead now, too.'"

The wine merchant Cyril takes a philosophical view of the events. "Under such circumstances, people reflect on life and how quickly it can be over, for no reason. In television, we see images of dead children in the Mediterranean Sea. It happens to them, just like it can happen to us," he says. Politically, he believes that the new terrorist attacks are related to an erroneous policy towards Iraq and to the horrors of the civil war in Syria.

But he does not point an accusing finger at the French government for bombing "Islamic State" in Syria, because he thinks that for reasons of foreign policy, it is not possible for the country to stay out. President Francois Hollande has already blamed IS for the attacks. Last night, sympathisers of the terrorist organisation celebrated the attacks on Twitter. 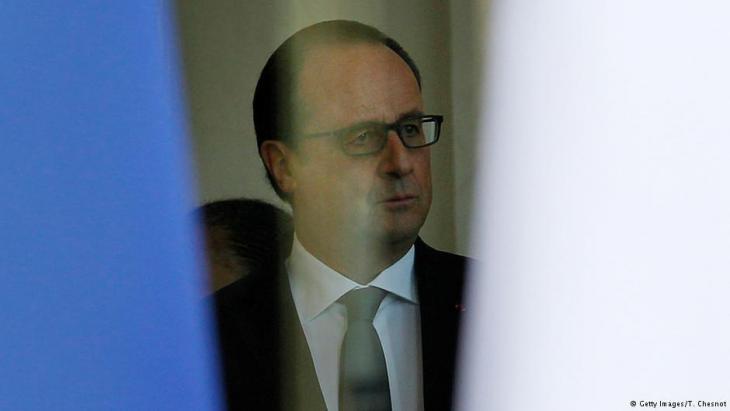 War on terror: on Friday evening, for the first time since the Second World War, France′s president, Francois Hollande, declared a national state of emergency. Borders controls were immediately tightened. According to Hollande, the attacks were planned "from abroad". Investigations are now focusing on whether any of the assailants were based in France

Not giving in to terrorism

There are long queues in front of the upmarket bakery across the street. Although the government has asked Parisians to stay home as much as possible, no one seems to care. It is almost unfathomable that people here are quite relaxed and hardly upset. A young father waiting in line feels sorry for his children. "Everything is closed: schools, swimming pools, museums. You cannot go anywhere with them," he says.

He also thinks people should go on living a normal life, as the terrorists should not rejoice in having forced people to change their lifestyles. He, too, cannot imagine what more the government can do after already implementing comprehensive anti-terrorist measures and new wire-tap laws in the spring of this year. After all, not every suspicious-looking person can be jailed - something a conservative commentator had suggested on a TV breakfast show.

"They should resign; Hollande's government has failed, and the minister of the interior should be dismissed on the spot," complains a neighbour in the line. But none of the people standing around him agree. "Then we would be giving in to the terrorists and destabilising ourselves," murmurs a women holding a package of cake.

Despite their abhorrence in the face of the attacks on the previous evening, the middle-class customers in this stylish, posh bakery seem to be united by a collective acceptance of fate. "We must not hate Muslims now. That's life and no one can prevent or foresee what happens. Life goes on," is how most people have expressed themselves.

And of course, everyone sympathises with the parents of the young people who lost their lives at Bataclan. "It is so awful; why must they massacre young people?" laments one elderly woman. That question remains unanswered today.

Home
Print
Newsletter
More on this topic
French police raid homes, vowing it's "just the beginning"French reactions to IS terror: "What next? Will we ask Muslims to kneel?"France after the attack on "Charlie Hebdo": Much more is at stake than press freedomReactions to the "Charlie Hebdo" attack in the Arab world: "Radicals killed radicals"
Related Topics
'Islamic State' | IS, Charlie Hebdo, International terrorism, Jihadism | Jihadists
All Topics

Dalia Hatuqa is an experienced journalist who has reported on the Israeli-Palestinian conflict from Ramallah, Washington DC and Amman. A writer for Time Magazine, Foreign Affairs ... END_OF_DOCUMENT_TOKEN_TO_BE_REPLACED

Since President Abdul Fattah al-Sisi seized power in Egypt in 2013, he has ruled the country with an iron fist. Civil society, opposition and free press struggle to survive. Tens ... END_OF_DOCUMENT_TOKEN_TO_BE_REPLACED

Very different Western reactions to the suffering in Ukraine and the Arab world show that there is a profound rift among cultures. Essay by Michael Young END_OF_DOCUMENT_TOKEN_TO_BE_REPLACED

Many Turks are dissatisfied with the international status of their country. At the same time, opinion polls reveal great scepticism among the Turkish population towards the USA. ... END_OF_DOCUMENT_TOKEN_TO_BE_REPLACED

Since Spain abandoned its traditional neutrality towards the conflict in Western Sahara, Morocco has announced a "new phase" in relations between the two countries. But what is ... END_OF_DOCUMENT_TOKEN_TO_BE_REPLACED
Author:
Barbara Wesel
Date:
Mail:
Send via mail

END_OF_DOCUMENT_TOKEN_TO_BE_REPLACED
Social media
and networks
Subscribe to our
newsletter