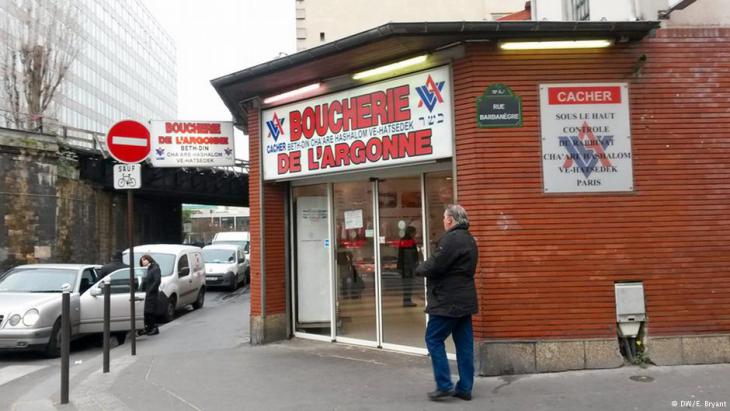 The art of tolerant coexistence

As France deals with the aftermath of religiously motivated attacks, a small butcher's shop in Paris employing both Muslims and Jews offers lessons on good interfaith relations. Elizabeth Bryant reports from Paris

"Yaya, come out!" Two Moroccan butchers laughingly coax their diminutive Algerian colleague who is hiding in a back room, wary of a reporter. Customers smile. Yaya is the jokester in the group.

It's Friday morning. In about an hour, the Boucherie de l'Argonne will be closed. The Muslims working here will head to afternoon prayers. The Jews will prepare for Shabbat. A practical accommodation for staff sharing similar roots and cultural references.

"We work well together," says Philippe Zribi, a Tunisian-born Jew whose family runs the butcher's store. The Zribis have installed a prayer room for their Muslim employees. They sometimes lunch together. Conversations are sprinkled with the Arabic from their homelands.

In a city still recovering from last year's deadly Islamist attacks, where national news is regularly peppered with reports of anti-Semitism, the Argonne store tucked next to an abandoned railroad track offers another, more positive face of interfaith relations. It also reflects the melting pot that defines the 19th arrondissement of northeastern Paris, whose 200,000 residents represent no less than 120 nationalities, local officials say. A district where streets are lined with Chinese grocery stores, African restaurants and Turkish carry-outs; where Pakistanis and Egyptians hawk French carrots and Tunisian oranges at outdoor markets.

With an estimated 30,000-40,000 Jews living in the 19th – France has no official figures based on ethnicity or religion – the district is also one of the largest Jewish neighbourhoods in Europe, according to local Deputy Mayor Mahor Chiche. It also hosts a sizeable Muslim population that mostly hails from North and sub-Saharan Africa. "We have a real mix, a patchwork of communities," said Chiche, who is in charge of community relations in the 19th. 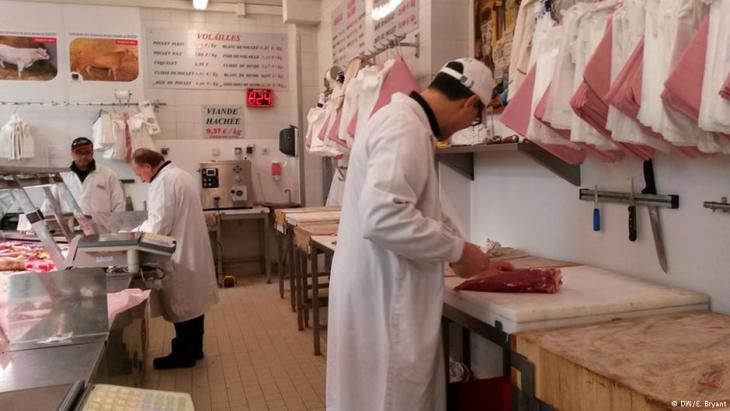 Suits everyone: the Boucherie de l´Argonne is closed on Friday afternoons, when the Muslim employees attend Friday prayers and the Jews prepare for Shabbat. The Jewish butcher's shop also has a prayer room for its Muslim employees

Other French have reached bleaker conclusions. Across the country, anti-Muslim acts tripled last year from 2014 to nearly 400, while anti-Jewish acts were double that number, according to Interior Ministry statistics. Since a Kurdish teen attacked a kippa-wearing teacher in Marseille last month, some Jews have opted to remove their skullcap and keep a low profile. "I remain pretty pessimistic," said Sammy Ghozlan, who heads the National Bureau for Vigilance Against Anti-Semitism, a watchdog group near Paris. Like many others, he blames the attacks on young Muslims and, to a lesser degree, the far right.

The 19th has its own share of problems. Islamist brothers Said and Cherif Kouachi, who gunned down a dozen people at the Charlie Hebdo magazine last January before dying in a hail of police gunfire, grew up here. They joined an extremist network known as the "Buttes-Chaumont gang," named after a neighbourhood park about a mile from the Argonne butcher store. "We had young people leaving for Fallujah, in Iraq, to become suicide bombers," Chiche said of events that took place more than a decade ago. "But they were a tiny minority. And their actions really raised awareness that we needed to do something about it."

Indeed, he believes, it forced the neighbourhood to take steps early on to diffuse tensions of local youth that other parts of France are now grappling with. The Buttes-Chaumont gang was ultimately dismantled, and anti-Semitic incidents have diminished, Chiche said – although he acknowledges "a lot more work" needs to be done in schools.

Jews and Muslims can work together

Rabbi Michel Serfaty, who heads a Jewish-Muslim friendship association, says Muslim groups are now reaching out to him. "This is new," he said. "They're saying they can't continue living this way, with misunderstandings." 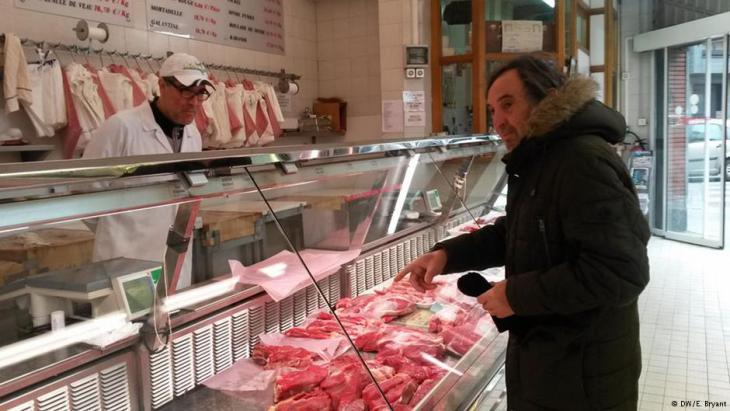 "It's vital that the animals are slaughtered correctly": whether kosher or halal – this meat counter offers both. The fact that the shop has been awarded a kosher certificate is confirmation enough for the Muslims that the animals have been killed according to religious custom

The Argonne butchery offers another example of relations that work. The store's kosher certification also draws Muslims, butcher Zribi says. "Their biggest concern is for the meat to be properly drained of the blood," he says of a custom that is also observed under halal butchery practices.

A native of Sfax, in southern Tunisia, Zribi moved to Paris as a toddler in the 1960s, his family joining the waves of North African Jews leaving their homelands after independence. In the 1980s, his father opened the story which Zribi helps to run with a brother.

For butcher Mostafa Makhoukh, a Muslim from Oujda, Morocco, the Argonne store where he has worked for 18 years is now "family." "Working with Jews isn't a problem," agrees another Muslim butcher, Abdel Haq, who also comes from Oujda. "We lived with Jews in Morocco." They join Zribi in blaming today's tensions on a generation growing up in France without the strict upbringing of their childhood.

Jews turning their back on France

The butchers are seeing the fallout. Increasingly, Jewish customers are dropping by to say goodbye, joining the thousands of French Jews who have headed to Israel in recent years. "They don't feel secure here anymore," says Zribi, who is staying put.

Yet if anything, last year's terrorist attacks, especially November's indiscriminate assault on Paris nightspots, has drawn Argonne's staff closer together. Zribi lost two Italian friends. Haq, the Muslim butcher, says he lost nobody, but remains shaken by the killings. "The only lesson I can offer is not to be afraid of the other person," he said. "If I find myself next to a Jew at a cafe, we'll talk. We have to makes moves towards each other."

In his controversial book published in 2020, French author Pascal Bruckner describes anti-Muslim sentiment as a fiction, claiming that the term "Islamophobia" is being used to ... END_OF_DOCUMENT_TOKEN_TO_BE_REPLACED

Several media reports in recent weeks have focused on the potential threat presented by Islamist groups in Germany. The discourse is fraught with generalisations, both sides ... END_OF_DOCUMENT_TOKEN_TO_BE_REPLACED

Critics of France's draft law to combat "radical Islamism" say the proposed measures are inefficient and will further stigmatise Muslims. They assert that involving Muslims in the ... END_OF_DOCUMENT_TOKEN_TO_BE_REPLACED

Sanctions against Ankara are being considered at the EU summit. The number of those in favour has risen. It remains unclear how Germany will behave. But would such measures have ... END_OF_DOCUMENT_TOKEN_TO_BE_REPLACED

Prominent Islamic scholar Muhammed Abu Zaid has urged Muslims in France to cooperate with the government. At the same time, he emphasised the need for the French authorities to ... END_OF_DOCUMENT_TOKEN_TO_BE_REPLACED
Author:
Elizabeth Bryant
Date:
Mail:
Send via mail

END_OF_DOCUMENT_TOKEN_TO_BE_REPLACED
Social media
and networks
Subscribe to our
newsletter