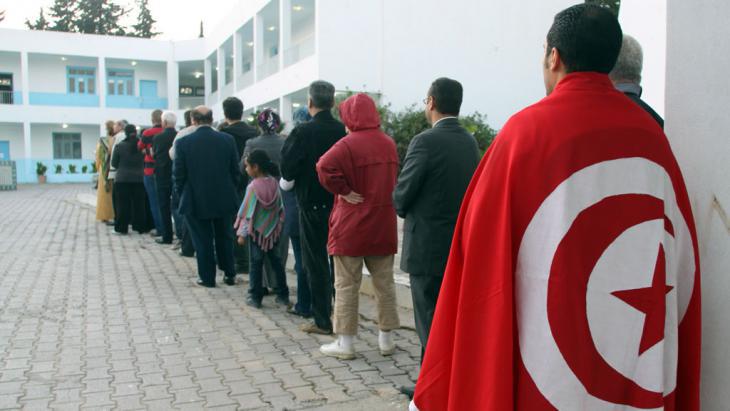 Parliamentary and presidential elections in Tunisia
The euphoria has evaporated

In the run-up to parliamentary elections on 26 October, more than five million Tunisians registered to vote, considerably more than in 2011. Nevertheless, observers expected voter turnout to be low. Many Tunisians are frustrated by the fact that their situation has hardly improved in the three years since the overthrow of Zine al-Abidine Ben Ali. By Sarah Mersch in Tunis

Walls all over the country have been spray-painted with neat rows of clearly numbered rectangles. These A-4 sized spaces are reserved for campaign posters, allowing parties to present their candidates and manifestos to the electorate.

Yet only days before the parliamentary elections on 26 October 2014, many of the rectangles were still empty. More than 1,300 parties and lists ran in 33 electoral districts, hoping to garner enough votes to be represented in the 217-seat parliament. However, many of the smaller parties and independent lists apparently didn't have either the funds or the volunteers to hang posters.

In a Tunis suburb, Hazem stands bewildered in front of the party lists pasted to the wall of a primary school. Although the 27-year-old engineer registered to vote, he was uncertain whether he would cast his ballot. "The last government was bad, and I won't be voting for them." He hardly knows any of the other parties. There are 51 running in his electoral district. The district of Kasserine boasts the country's highest number of parties: a total of 69.

Campaigning for the undecided voter

Located on the border to Algeria, the mood in Kasserine is similar. There is a total lack of enthusiasm. The region is suffering from high unemployment and continuing armed conflict between security forces and supposed terrorists on Mount Chaambi, which towers majestically above the small city. 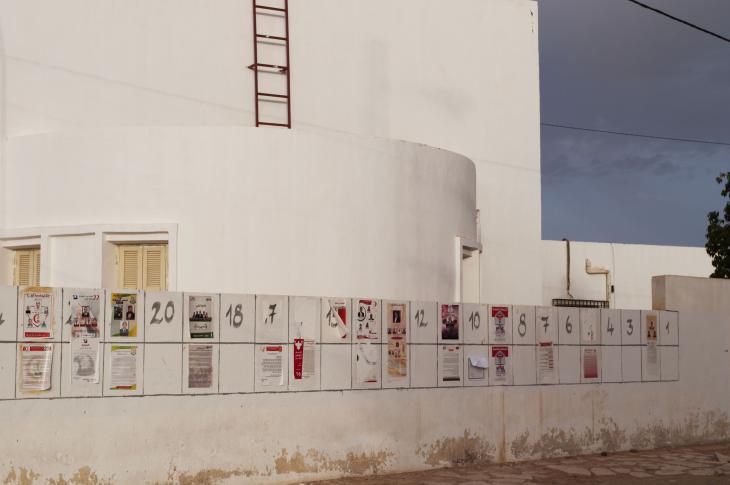 Symbolic of the Tunisian parliamentary election as a whole? Numbered rectangles like the ones above in Douz, have been painted on walls all over Tunisia. Political parties are allowed to use them for their election posters. However, despite the veritable deluge of parties and candidates standing for election, many of the rectangles remain empty. It is a similar picture with the electorate, although more people have registered to vote this time than in 2011, enthusiasm about the election is low

Afef, who has just graduated with a degree in accounting, says that she is not afraid. After more than a year, the sounds of gunfire and bombardment in the distance have become part of everyday life. She says that she hopes the elections will bring change to the region. "But the mentalities here can sometimes drive you crazy. It will take some 15 to 20 years before something like that changes." This is why, she feels, it is all the more important for young people to do something for their region.

Most Tunisians are primarily concerned about the economy, security and employment. These issues were addressed by the election manifestos of the various parties. On the subject of how they would implement and finance their election promises, however, the parties remained rather vague.

In recent weeks, a number of individuals, who had previously not played any great role in the country's politics, stepped onto Tunisia's political stage. Their appearance may have had a considerable influence on the way people voted and could break the bipolar structure of Tunisian politics.

Dividing up the pie?

The country's two largest parties, Nidaa Tounes and Ennahda, relied on their solid base in the electorate, while attempting to woo undecided voters.

In 2011, Ennahda emerged from the election to a constituent assembly as the strongest party. Its leaders soon realised that taking on the responsibilities of government and political crises damaged the party's image. But despite a few dents in its image, the party still maintains a powerful base throughout the country. It will, therefore, weather the political storm, despite the loss of disappointed Islamist voters from 2011, and can expect to win at least a fifth of all votes.

The second largest party, Nidaa Tounes (Call of Tunisia), is a newcomer to Tunisia's political stage. Founded in 2012 by the now 87-year-old Beji Caid Essebsi, a former minister under Habib Bourguiba and transitional prime minister in 2011, it has positioned itself as a secular alternative to the Islamists of Ennahda. 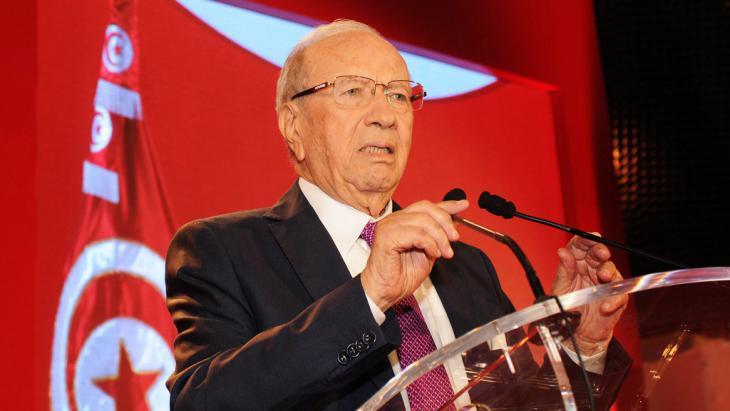 The second largest party in the country is Nidaa Tounes (Call of Tunisia). Its founder, 87-year-old Beji Caid Essebsi (pictured above), a former minister under Habib Bourguiba and transitional prime minister in 2011, is running for president in November 2014

In 2013, the party was exposed to harsh criticism when it accepted the membership of Mohamed Ghariani, who served as the last secretary-general of the now dissolved Democratic Constitutional Rally (RCD), the party of the overthrown leader Zine al-Abidine Ben Ali. According to party members who have since quit Nidaa Tounes, Ghariani has been pulling the political strings behind the scenes. These defectors fear that the old guard is now exerting too great an influence over Nidaa Tounes.

While Nidaa Tounes is sending Beji Caid Essebsi as its candidate into the presidential election on 23 November, Ennahda is concentrating on the race for parliament. Although both parties present themselves to the public as being diametrically opposed to each other, hardly anyone in Tunisia would be surprised if both ultimately ended up sharing power.

The two small coalition partners in the former governing three-party alliance, President Moncef Marzouki's Congress for the Republic and Ettakatol, have been steadily losing members and deputies in recent years.

The Popular Front, a political alliance of leftist and communist parties, experienced a sharp rise in the opinion polls in 2013 after the assassination of two of its prominent members, Chokri Belaid und Mohamed Brahmi. One year on, however, political reality seems to have caught up with this left-wing alliance too and it can now only hope to win a few seats in the working-class strongholds in the south-west of the country.

That leaves a few great unknowns, one of which is causing some headaches in the established parties. Slim Riahi, a businessman with opaque assets and the president of Club Africain, one of the country's largest football clubs, has entered the race to become president of Tunisia. His party, the Free Patriotic Union, has been going door to door in the poorer districts of the capital, hoping that its well-known party leader will help it achieve good results in the presidential election next month.

The media has also been focusing heavily on the return to public life of a number of politicians from the former regime. A total of five former ministers under Ben Ali are running as candidates in the presidential election. Above all, it is their experience in government that could help them and their parties achieve electoral success. This could prove effective, as the frustration of many Tunisians is growing. They are still waiting for the political transformation of 2011 to bear fruit. Quite a few are longing for someone in power "who understands how things are done."

Of course, the old guard was corrupt, says Hazem, expressing concern. But perhaps Tunisia really does need a strongman once again. In the run-up to the election, discussions about candidates tended to overshadow discussions about content, even though the constitution adopted in January 2014 affords Tunisia's president considerably fewer powers than previously.

The parliamentary election was certainly overshadowed by the presidential election, which is scheduled for 23 November. With "only" 27 candidates in the running for that post, the choice will be comparatively clear.

Tourists have been returning to Tunisia, Egypt and Morocco. But, given the global uncertainty caused by the Ukraine war, will the comeback be enough to save a struggling sector, ... END_OF_DOCUMENT_TOKEN_TO_BE_REPLACED

By 2050, the Middle East and North Africa could be dealing with many more elderly people suffering from dementia. A lack of facilities, specialists and local knowledge means the ... END_OF_DOCUMENT_TOKEN_TO_BE_REPLACED

Tunisians are set to vote on a new constitution on 25 July. The prominent lawyer and women's rights activist Yosra Frawes fears the referendum could facilitate a return to ... END_OF_DOCUMENT_TOKEN_TO_BE_REPLACED

END_OF_DOCUMENT_TOKEN_TO_BE_REPLACED
Social media
and networks
Subscribe to our
newsletter