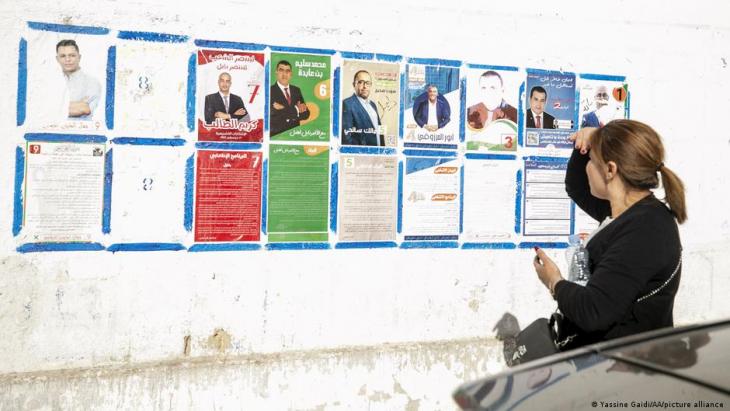 Tunisians go to the polls to elect a new parliament on Saturday, 17 December. The election is likely to result in a dummy parliament, sealing its undemocratic credentials. This is the latest episode in a turbulent chapter for the north African country where the Arab Spring began. Can the autocratic drift be reversed? By Amine Ghali

The uprising of January 2011 triggered the Arab Spring and sparked high hopes for Tunisia's democracy. More than a decade on, however, the nation's democratic credentials look deeply tarnished. In 2019, Kais Saied was elected president with more than 70 percent of vote. He has since dismissed the government and frozen parliament. He has also closed independent commissions and dissolved the High Judicial Council, handpicking a new electoral commission.

In addition to legislating by decree, Saied has pushed through a new constitution, which he wrote without substantial citizen participation. It is a document that forms the foundation of an autocratic presidential regime. Tunisia's undemocratic process looks set to be sealed with the installation of a dummy parliament after the upcoming election on Saturday, 17 December. 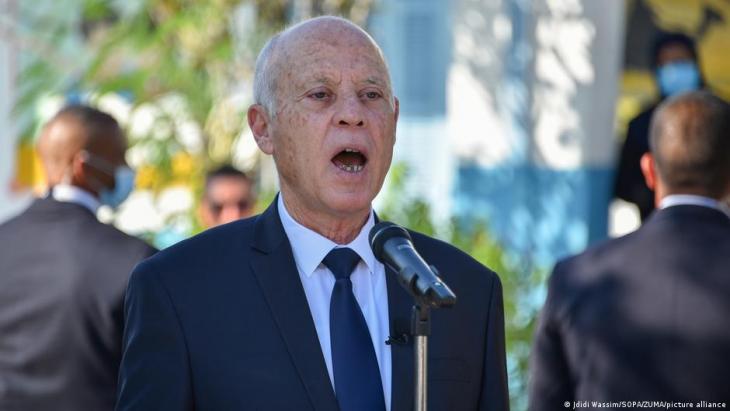 In July 2022, President Kais Saied pushed through a new constitution for Tunisia that stripped parliament of any real authority and gave his own office almost unlimited powers. According to Amine Ghali, "it is a document that forms the foundation of an autocratic presidential regime"

When democracy fails, so does the economy

Under Kais Saied's one-man rule, Tunisia faces political and socio-economic disaster. While the economy splutters, a weak government is being steered by the president's directives. As the Tunisian economy experiences unprecedented shortages of oil and key commodities, public finances are on the verge of collapse.

The government spent over 16 months negotiating a loan from the IMF. It finally obtained preliminary approval for a US$1.9 billion loan over 4 years, which is less than a third of the requested amount. The IMF conditions, meanwhile, require extensive economic reforms that would hurt society.

The Bertelsmann Foundation's Transformation Index (BTI) puts Tunisia's economic woes in context: at the Index's inception in 2006, the country's economic performance rating stood at 9 out of a possible 10 points, suggesting that the economy was poised for solid growth. By 2022, however, this rating had slumped to just 5 points. Meanwhile, its democracy status of 6.6 points firmly places it in the "defective democracy" bracket. "The country's economic model has barely changed and does not deliver for many Tunisians, particularly for young people," wrote the authors of the BTI. 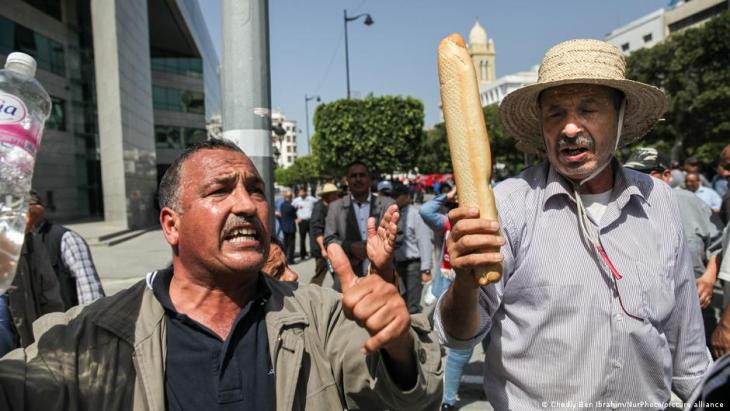 The authors of the Bertelsmann Foundation's Transformation Index (BTI) say that "the country's economic model has barely changed and does not deliver for many Tunisians, particularly for young people." Pictured here: a protester in Tunis holds up a stick of bread during a demonstration against the president and his policies

Emigration on the rise

As poverty grows and safety nets shrink, increasing numbers of Tunisians are opting to migrate. While educated people, such as doctors, take the legal route, others leave the country illegally, resulting in frequent humanitarian disasters in the Mediterranean Sea.

At political level, meanwhile, the crisis is deep-seated. There is a lack of accountability: the president has issued more than 60 decrees in 16 months without consultation. As part of his populist tactics, the president has boycotted political parties, demonised civil society and the media, closed or co-opted independent commissions, denigrated intellectual and economic elites and instrumentalised the international community.

After garnering widespread support and sympathy in his early months, he has since alienated most of the informed public and the national elite. Public support is dwindling, as indicated by low participation in both the e-consultation in March and the referendum in July of this year. Early supporters are now turning against the president, including some members of his inner circle such as his former chief of staff, Nadia Akacha, who went abroad after being forced to resign.

December's election will be shaped by the president's new measures, not least his decision to replace the elected Independent Election High Commission (ISIE), which was highly regarded by the international community. His unilaterally drafted new election law serves to prohibit political parties from presenting and supporting candidates. This system will favour local notorieties, eliminate the chances of women being elected and encourage the fragmentation of the political spectrum. The new election law and a series of official gaffes and uncertainty has prompted most political parties to boycott the ballot. 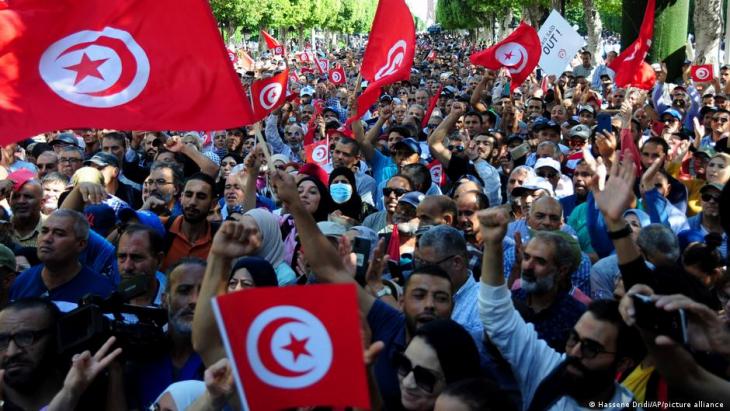 According to Amine Ghali, public support for the president is dwindling. There have been a number of protests and demonstrations over the past year, some of which have resulted in violent clashes with police. Almost all the country's political parties, including Ennahdha, have said they will boycott Saturday's vote. It remains to be seen whether turnout will be low, as it was in the referendum on the new constitution in July

Can Tunisia's undemocratic drift be halted?

But can this autocratic drift be corrected within the new framework? The answer is "probably not". Tunisia needs a new political and social contract, including a new constitution, new democratic institutions and a new vision of economic reform to benefit a wider range of people.

Urgent questions need to be resolved. Can Tunisians reach this maturity without inflicting damage? Can the economy stabilize amid such political instability? Can the international community support such an adjustment process?

At present, the majority of national actors – such as politicians, opinion leaders, scholars, labour unions and civil society representatives – are against the president, although some are more vocal than others. Meanwhile, the business community remains silent, probably to safeguard its interests or to avoid being called out for behaviour such as clientelism and tax evasion.

For now, deviation from democratic standards looks set to continue. "The country is in urgent need of reforms that can ensure prosperity for more people," the BTI authors wrote in their latest Tunisia report. "But even in the face of pressure from international financial institutions, entrenched interests are unwilling to yield".

The international community is unfortunately adopting a mild approach. This is especially true of the European Union, which continues to prioritise the fake stability of autocratic regimes over negotiated transformation, a key step towards forging genuine democracies.

How is one to convey the history of Islamic images of Muhammad freed from today’s polarised politics? What are the challenges and pinch points of this particular academic ... END_OF_DOCUMENT_TOKEN_TO_BE_REPLACED

A Tunisian farmer attaches a machine to a cow's udder and sets the pump whirring, but he only expects to fetch less than half the normal amount of milk amid soaring fodder prices END_OF_DOCUMENT_TOKEN_TO_BE_REPLACED

The book "The Invention of the Maghreb: between Africa and the Middle East" prompts us to review basic terminology. This includes terms that we use almost every day as if they are ... END_OF_DOCUMENT_TOKEN_TO_BE_REPLACED

The term "Tuareg" refers to tribes and nomads who speak dialects of Tuareg and live in Targa, an area in south-west Libya recently renamed Wadi Al-Hayat but previously known as ... END_OF_DOCUMENT_TOKEN_TO_BE_REPLACED

Where are the measures to deal with the looming challenges facing the Arab world? In this commentary, Marwan Muasher warns that the region is in grave danger of falling behind ... END_OF_DOCUMENT_TOKEN_TO_BE_REPLACED
Author:
Amine Ghali
Date:
Mail:
Send via mail

END_OF_DOCUMENT_TOKEN_TO_BE_REPLACED
Social media
and networks
Subscribe to our
newsletter