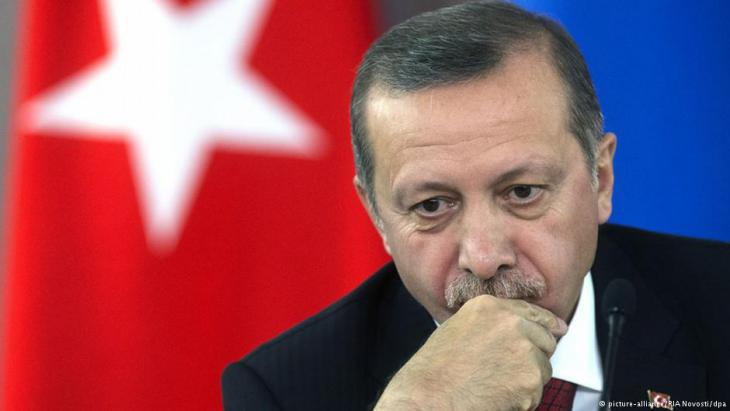 Coalition, minority government or new elections? President Erdogan's AKP has lost its absolute majority in Turkey's parliamentary poll. What's more, a new party is now poised to enter parliament. What does this mean for the future of the country? Michael Martens sends this analysis from Istanbul

The Justice and Development Party (AKP), which is very used to winning, has both won and lost on this occasion. The AKP has yet again emerged as the strongest force in Sunday's Turkish parliamentary election (7 June 2015), just as it has done in every poll it has participated in since its foundation in the year 2001. It even captured significantly more votes than in its first parliamentary poll in 2002, when 34 per cent of the electorate backed the fledgling party.

But while in 2002, just over a third of votes cast was enough to secure an absolute majority of mandates in Ankara – because apart from the AKP, only the Republican People's Party (CHP) just managed to clear the 10-per cent hurdle to enter parliament – the situation is 2015 is quite different.

A fundamental shift has occurred in Turkey's political landscape, because the gamble of the leftist (and to some extent radical left-wing) Peoples' Democratic Party (HDP) has paid off. The party, supported by Kurds, a section of the Turkish left wing as well as tactical voters who oppose President Tayyip Erdogan, just succeeded in overcoming the high threshold, enabling them to enter parliament as the fourth strongest party. 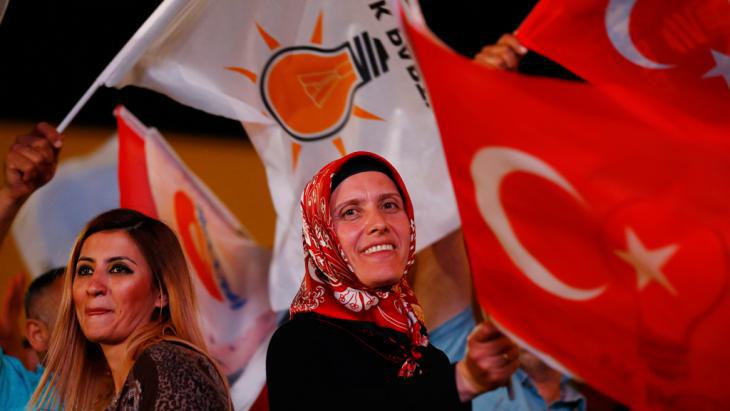 A victory and a defeat rolled into one: although the ruling Justice and Development Party (AKP) won 43 per cent of the vote on Sunday and remains the biggest party in the Turkish parliament, it has lost its absolute majority and must now seek either a coalition partner or support from other parties for an AKP minority government. Pictured here: AKP supporters celebrate after the announcement of the election result in Ankara

Although the AKP captured some 43 per cent of the vote on Sunday, thereby retaining its status as Turkey's most popular political force with ease, this has cost the party the absolute majority of seats and has put an end to single-party rule.

When serving head of government Ahmet Davutoglu is now asked to form a government, he must do something the AKP is not accustomed to doing: he must seek a coalition partner or at least find enough deputies from other parties to support an AKP minority government. If he succeeds in doing neither, then fresh elections will have to be called. But what are the coalition options?

For many observers, the "most natural" coalition partner for the AKP is the Nationalist Movement Party (MHP) led by Devlet Bahceli, which already participated in a failed coalition government in Ankara before the rise of the AKP. Admittedly, Bahceli didn't exactly roll out the red carpet for the AKP during the election campaign. The nationalist leader was sharply critical of the governing party and Erdogan, first and foremost opposing any negotiations with the Kurds.

It is difficult to imagine a scenario with improved minority rights and Turkish decentralisation with the MHP unless the party is willing to betray its chauvinist principles in exchange for a share in power, something it has done before. After all, in the late 1990s, the MHP formed part of a coalition that abolished the death penalty, thereby saving the life of detained Kurdish leader Abdullah Ocalan. To this day, many MHP voters have not forgiven the party for this, as they wanted (and still want) to see Ocalan hang. 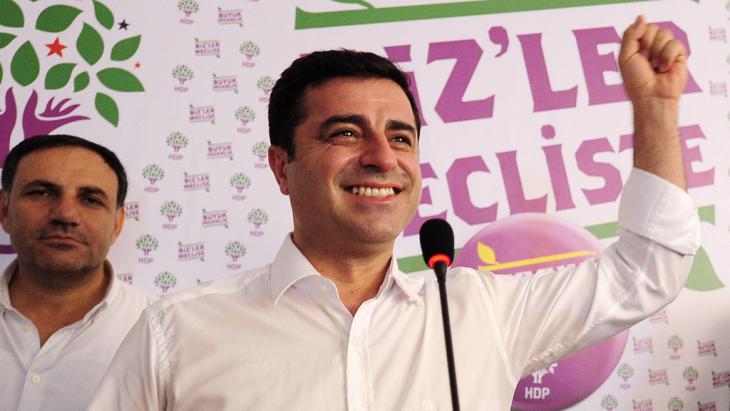 A gamble that paid off: the HDP party succeeded in getting more than 10 per cent of the vote, which means that it will be represented in the Turkish parliament. Its unprecedented result also put paid to the AKP's hope of getting the two-thirds majority that would have enabled it to change the constitution and turn Turkey into a presidential republic. Pictured here: Selahattin Demirtas of the HDP

No clear coalition partner in sight

So who else might be considered as a partner in a second Davutoglu-led government? Selahattin Demirtas, the head of the HDP, can't really enter into a coalition with the AKP – at least not as long as the AKP continues its campaign to amend the constitution to replace Turkey's parliamentary system with a presidential one. Demirtas promised several times during the election campaign that his party would under no circumstances approve the changes pursued by Erdogan. A U-turn from this position would be political suicide for Demirtas and the HDP.

So this means the third possibility for Davutoglu would be the Republican People's Party (CHP), which has suffered a series of election defeats under the leadership of Kemal Kilicdaroglu and which once again failed to meet its own expectations on Sunday. Again, however, the prospect of an AKP–CHP coalition requires a great deal of imaginative thinking, at least as long as the current personnel constellations of the two parties remain unchanged.

One thing is certain: despite the victory of his AKP, Sunday's poll represents the biggest political setback in Recep Tayyip Erdogan's career so far. In Europe, any politician would be more than happy with a result of over 40 per cent for his or her party, but Erdogan has not only failed to hit his extremely ambitious target of getting a majority big enough to amend the constitution. "His" AKP has also become a regular party that now needs partners to be able to govern. Over the coming weeks it will become clear how this setback will impact upon Erdogan's openly declared aspiration to continue to lead the AKP.

There have long been rumblings within the AKP, but thus far they been obscured by the success of the party. Former President Abdullah Gul, who was cold-bloodedly sidelined by Erdogan, could make his present felt again. AKP co-founder Bulent Arinc, who has up to now served as deputy prime minister and who has frequently locked horns with Erdogan in recent times, could ally himself with Gul. Other voices of discontent could also be raised. This much is certain: voters in Turkey set the wheels of change in motion and ruffled more than a few feathers last weekend.

Relations between Turkey and Russia are ambivalent. Moscow is nonetheless trying to prop up the leadership in Ankara. Elections are to be held in Turkey in June – and the last ... END_OF_DOCUMENT_TOKEN_TO_BE_REPLACED

All eyes in Turkey are on a court hearing scheduled for January 30 into a child abuse case that allegedly occurred with the knowledge of one of Istanbul's most powerful Islamic ... END_OF_DOCUMENT_TOKEN_TO_BE_REPLACED

Any reconciliation between Turkey and Syria’s Assad regime would have disastrous consequences for many Syrians, explains Syria expert Kristin Helberg END_OF_DOCUMENT_TOKEN_TO_BE_REPLACED

The poetry of Pir Sultan once prompted uprisings in the Ottoman Empire. To this day, Alevis identify with him. Rainer Hermann visited Mehmet Celebi, a direct descendant of the ... END_OF_DOCUMENT_TOKEN_TO_BE_REPLACED

There are signs of an imminent normalisation of relations between Turkey and Syria. This would allow Erdogan to score political points domestically before the upcoming elections ... END_OF_DOCUMENT_TOKEN_TO_BE_REPLACED

Turkey will mark the centenary of the proclamation of the Turkish republic in October. But 2023 will be an important year in another respect too: Turks will go to the polls in ... END_OF_DOCUMENT_TOKEN_TO_BE_REPLACED
Author:
Michael Martens
Date:
Mail:
Send via mail

END_OF_DOCUMENT_TOKEN_TO_BE_REPLACED
Social media
and networks
Subscribe to our
newsletter