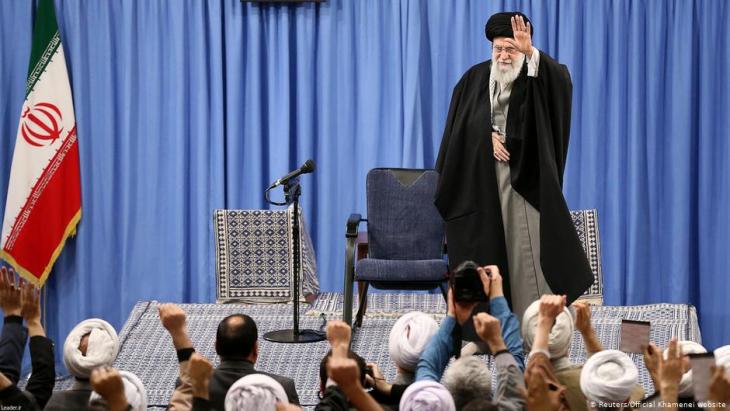 Parliamentary elections 2020 in Iran
Era of the Khamenei vassals

Once again there was not much to vote for in the Islamic Republic. Half of the candidates were excluded anyway. But for Khamenei, the election was part of a larger plan, namely full-scale preparation for an uncertain future. By Ali Sadrzadeh

Was that an election? Of course it was. In fact, it was a very well-calculated and planned ballot. It was an election Khamenei had fought for for a long time. He was barely interested in having genuine representatives of the people in his parliament. After all, in these current times of crisis Iran's revolutionary leader needs one thing above all else: yes-men, willing executors and agents. Now he has secured a major victory, won a decisive battle.

It is easy to explain how this election victory came about. Three numbers are enough: half of all the candidates were eliminated, in 158 constituencies there was only one candidate to vote for, and the vast majority of eligible voters stayed away from the polls. In the capital Tehran and in many of the country's major cities, voter turnout was not even 20 percent. It was a Pyrrhic victory.

Buffers in Khamenei's machinery of power

To secure this victory, Khamenei even had to exclude those candidates from the election who are actually indispensable to the stability of his regime. They question neither the principles of the Islamic Republic nor Khamenei's unlimited power. These are not genuine reformers who want to overcome Khamenei's republic, seek a constitutional change or force secularization. Many of them would be satisfied with a crumb of power. They are merely buffers in his machinery of power.

Real reformers have long since ceased to exist in the Islamic Republic. Ever since the election of Mahmoud Ahmadinejad in 2008, they have been regarded as the avowed enemies of order. Ahmadinejad's opponents from back then have been under house arrest ever since. Other reformers have disappeared from the political scene. The media may not even mention Ahmadinejad's predecessor, the reform president Mohammad Khatami, by name; it is illegal to publish his image. 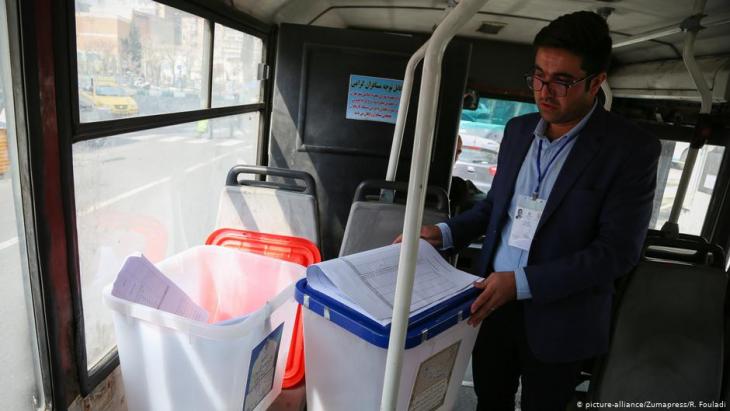 Empty ballot boxes, a weary electorate: a low turnout had been expected even before the parliamentary elections began. Many young supporters of the moderate camp, in particular, chose not to go to the polls in the first place out of disappointment with the political leadership. In addition, thousands of moderate candidates were excluded from the election

Empty ballot boxes, a weary electorate: a low turnout had been expected even before the parliamentary elections began. Many young supporters of the moderate camp, in particular, chose not to go to the polls in the first place out of disappointment with the political leadership. In addition, thousands of moderate candidates were excluded from the election.

Those who remain of these reformers - like President Rohani - describe themselves as moderate. Although these representatives allow themselves the occasional quiet criticism, they ultimately do exactly what Khamenei wants. No doubt you can accuse the Supreme Religious Leader of all sorts of things: but he is not stupid. On the contrary: his instinct for power is proverbial. Over the course of his more than thirty years as leader, he has eliminated all his rivals, large and small. And in this republic there is no one in sight who could pose a serious threat to Khamenei.

But why did he need to exclude his loyal servants from the election? One could speculate about that, but one thing is certain: Khamenei foresees difficult times ahead. And he is probably right. It will be so tough that he will have to rely exclusively on the most loyal men in his ranks - men whose loyalty is above suspicion and who are prepared to commit any brutality.

Coincidence or not: shortly after the end of the ballot, the international Financial Action Task Force (FATF) put the Islamic Republic on its blacklist. The Task Force is based in Paris and monitors the worldwide bank accounts and financial transactions of all countries. Iran is therefore now, along with North Korea, a risk country for any money transfer.

For two years, President Rouhani and his Foreign Minister Zarif have tried to convince Khamenei to pass the necessary laws and submit to international conventions in order to escape this black list. In vain. Now even Chinese and Russian banks will refuse to do business with Iran officially.

The polling stations were still open when the USA also put the members of the Iranian election commission on its long sanctions list - the body that assesses the eligibility of candidates.

Arming for an uncertain future

With "his" parliamentary election Khamenei is not only arming himself to withstand increasing pressure from abroad. He wants to rally the most loyal of the faithful around him. For Iran is seething on the domestic front, too, and dissatisfaction is palpable everywhere. And when protests resume, they will be very bloody. Just like last November, when at least 1,500 demonstrators were shot dead within three days. At any rate, this is the horrific tally published by the news agency Reuters. 8,000 people were arrested during that week when there was no internet connection - people who are still in prison.

In addition to all these crises and speculations, there is also the question of who should succeed Khamenei. Does the future Parliament also have to deal with the forthcoming struggle for succession? Who will succeed Khamenei, who will be 81 years old in April? Will it be his second oldest son Modjtaba, who is said to be the chief manipulator behind the scenes?

He certainly seems sufficiently obsessed with power, is regarded as sufficiently well-connected in the intelligence and security circles and possesses the necessary brutality to wage a possible war of succession.

Home
Print
Newsletter
More on this topic
The Republic of Iran turns forty: A theocracy at the crossroadsInterview with Nader Hashemi on the protests in Iran: Violence "reflects the Iranian regime's desperation"Protests in Iran: The spark that turned into a wildfire
Related Topics
Ayatollah Ali Khamenei, Democracy and civil society, Hassan Rouhani, Iranian opposition, Islamic Revolution of Iran, Mohammad Khatami
All Topics

Short movies nominated for an Oscar often don't get wide public attention. But when one is about an Iranian girl seeking freedom from male domination by taking off her veil, ... END_OF_DOCUMENT_TOKEN_TO_BE_REPLACED

World-famous Iranian film director Jafar Panahi has been incarcerated for several months, even though Iran's Supreme Court overturned the verdict against him. Now, he has gone on ... END_OF_DOCUMENT_TOKEN_TO_BE_REPLACED

Young women are driving forward the protests against the Iranian regime, which have been going on for months. Literature provides clues as to why that should be, and why the ... END_OF_DOCUMENT_TOKEN_TO_BE_REPLACED

Visiting the country of her parents, murdered by the Iranian regime in 1998, German-Iranian artist Parastou Forouhar finds a changed society: hopeful, strong and courageous, ... END_OF_DOCUMENT_TOKEN_TO_BE_REPLACED

Ballet performances are prohibited in Iran. In her film "1001 Nights Apart", director Sarvnaz Alambeigi documents the history of dance in the Islamic Republic. By Fahimeh Farsaie END_OF_DOCUMENT_TOKEN_TO_BE_REPLACED

END_OF_DOCUMENT_TOKEN_TO_BE_REPLACED
Social media
and networks
Subscribe to our
newsletter