Two weeks after parliamentary elections in Iraq, people are still waiting for the final results. No clear winner has yet emerged, and parties are still keeping their options open as they consider potential coalition partners. By Nagih Al-Obaidi 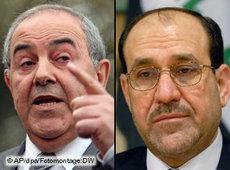 Some 90 percent of the ballots have been counted, giving al-Maliki's State of Law coalition and the secular alliance of Iyad Allawi each around 90 of the total 325 seats in parliament

​​ It is an emotional rollercoaster for both voters and candidates. Initial projections had serving Prime Minister Nuri al-Maliki and his challenger Iyad Allawi jockeying for pole position.

And while both political rivals claimed victory for themselves, they didn't hold back on accusations of election fraud and demands for a ballot recount – just a foretaste of how doggedly this battle for power will continue to run once the elections are over.

For a long while, the al-Maliki list led the projections. But then in a surprising turnaround, Allawi edged ahead. Following the count of more than 90 percent of the ballots, the secular politician and his Al-Iraqiyya Movement is just a nose ahead, but with a wafer-thin advantage that could well result in another change in leadership.

Voters were not choosing a party but a particular member of parliament, and the results therefore serve as a barometer on the popularity of politicians. In the Iraqi capital Baghdad, where al-Maliki is standing for parliament, more than half a million people voted for him – 200,000 more than for his rival.

Supporters of al-Maliki say this is a vote of confidence for him in his role as prime minister. His biggest trump card is that he is the undisputed number one on his list, whereas other candidates including Allawi could have difficulties keeping their allies sweet. According to the constitution however, the president must instruct the leader of the largest parliamentary group to form a government. According to estimates, both leading alliances can expect to capture around 90 of the 325 seats in parliament.

Because the distribution of seats is not only determined by the overall result, but also depends on results from individual provinces, both have a very good chance of gaining an advantage of just a few seats.

As third power the majority Shi'a Iraqi National Alliance has around 67 seats, followed by the Kurdistan Alliance with 38 to 40 seats. 15 seats are reserved for national minority groups and extra seats gained in a system of proportional representation, leaving the remainder for smaller parties. It looks as though the "big four” will go on to make up the future government. 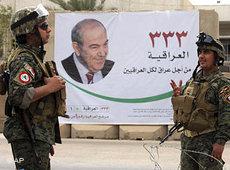 Sliding into political insignificance? It is mainly the Allawi list and smaller parties that are afraid of being forced into opposition and politically sidelined

​​ Exploratory talks are currently in full flow. It is noticeable that the parties are keeping all their options open, and not ruling out any potential coalition partners. From a purely mathematical perspective, many coalition combinations are possible. A grand coalition between al-Maliki and Allawi looks unlikely at the moment, as the two really locked horns during the campaign, and neither is about to back down and start making compromises.

The rotation principle could present a way out of the deadlock here. A possible option is that al-Maliki makes peace again with his old allies in the National Iraqi Alliance, and forms a new government together with the Kurds. But it's highly questionable whether he would be granted the post of prime minister in such an arrangement.

It is the followers of radical Shi'a cleric Muktada al-Sadr who are especially hostile to the nomination of al-Maliki. A further variant would be similar to the one just outlined but with Allawi in al-Maliki's post. And here there is some indication that the role of kingmaker is again falling to the Kurds. Little wonder then that many politicians in Kurdistan are standing in this poll. Apart from the two favourites jockeying for the prime minister's job, there are others lurking in the background hoping to emerge as the lucky bystander. 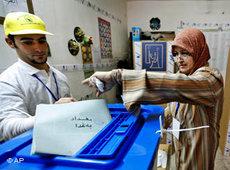 ​​Representatives of many parties are also toying with the idea of forming a broad-based coalition, as a way of securing their slice of the pie. This is an approach not only motivated by the fact that no one goes into opposition voluntarily, thereby forgoing the chance of high-ranking positions, influence and privileges. Observers also warn that the exclusion of certain groups could further fan the flames of confessional conflict in the country and provoke very real dangers.

It is mainly the Allawi list and smaller parties that are afraid of being forced into opposition and politically sidelined. This is why calls for a unity government are becoming more vociferous. But others believe that such a government would represent a setback for Iraq's fledgling democracy.

Critics of the unity government solution say it amounts to lazy compromises and the cementing of ethnic and confessional proportional representation, something that in turn prevents the formation of an administration that is capable of governance. But without a strong opposition, there is a real danger that democratic life could be left to languish. It was primarily al-Maliki who criticised the democracy of consensus approach and espouses the formation of a majority government through which the prime minister can exert his constitutional authority to full effect.

Threat of a political vacuum

It looks likely to be some time before election results are finalised and potential challenges addressed and laid to rest. This also applies to the formation of a new government. A lengthy period of arduous horse-trading is in any case to be expected. And this at a time when the US plans to cut its force in Iraq down by half from 100,000.

On the other hand there are plenty of problems in Iraq that require a working government to come up with solutions. But perhaps this will also increase the pressure on Iraq's politicians to appease conflicts and find compromises.

Whatever the name of Iraq's next prime minister, the neck-and-neck battle in this poll certainly has rarity value in a region where it was normally known in advance who would win an "elections" – sometimes with 99.9 percent of the vote. Whether this is a cause for optimism depends in the first instance on the conduct of those on the political stage in Iraq.

END_OF_DOCUMENT_TOKEN_TO_BE_REPLACED
Social media
and networks
Subscribe to our
newsletter