Prime Minister Haider al-Abadi has formed his own alliance, which he calls the "Victory Alliance". The "victory" is a reference to the attrition of IS, achieved under his responsibility. The alliance comprises a large number of smaller Sunni and Shia groups, all of which want to profit from the prestige of the triumphant PM.

The Abadi alliance is facing off an alliance led by former PM Nuri al-Maliki. Just as in earlier elections, his coalition is called the "State of Law". 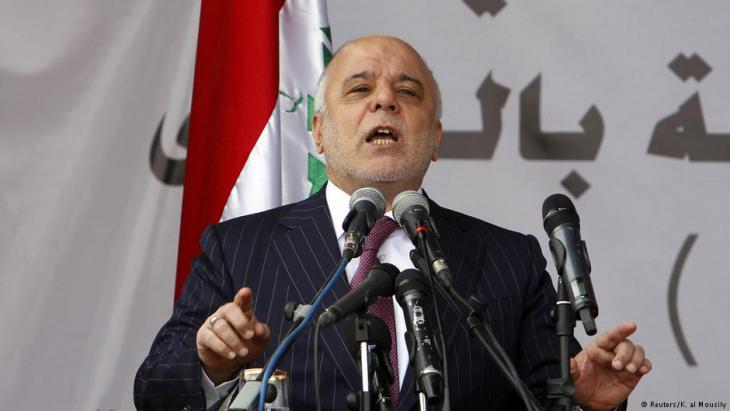 Stable government by no means certain: despite his popularity following the successful campaign against the extremist militia Islamic State (IS), Prime Minister Haider al-Abadi is unlikely to gain a parliamentary majority without entering a coalition. Rivals in the election include his predecessor Nuri al-Maliki and the former transport minister Hadi al-Amiri. The post of prime minister is reserved for a representative of the majority Shia population

In actual fact, both Abadi and Maliki are members of the same party, the Shia "Islamic Dawa Party" (Call). It once put up underground resistance to Saddam Hussein. Today however, Abadi and Maliki are rivals. Maliki sympathises with Iran and criticises the PM for his collaboration with the Americans. Members of the "Dawa" Party can choose freely between one or the other.

Another influential Shia, Muqtada al-Sadr, has refused to get involved in one of the big Shia alliances. Muqtada al-Sadr is the leader and idol of the large numbers of Shia residents of Sadr City, the north-eastern slum district of Baghdad. He is descended from a well-known family of scholars almost completely wiped out by Saddam Hussein.

During the time of the American occupation, he fought against the United States. His group has 34 deputies in parliament. Instead of merging with the Abadi or Maliki alliance, he sealed an alliance with the Iraqi Communists and other smaller left-wing groups.  He calls this the "Alliance of Revolutionaries".

This alliance was actually formed back in 2016. At that time, Muqtada al-Sadr and his "leftist forces" demonstrated against the corruption of Iraqi politicians. Some of the protesters managed to get inside the "Green Zone". This is a park-like complex with a palace built by Saddam Hussein. As occupying power, the Americans governed from here between 2003 and 2010. Later, for security reasons, the "Green Zone" became the hermetically-sealed location of the Iraqi parliament and foreign embassies.

Iraq is ranked 10th on the list of the world's most corrupt nations. But it is not Sadr's aim to fight corruption, but rather also the ways and means that senior positions in the civil service and state-run economy are allocated. Such posts are still distributed in accordance with denominational criteria.

So: Iraqi Shias, who once appeared as a joint force, are now split into five alliances competing with one another.

November 2022 sees the Arab world firmly in the spotlight with the COP27 in Egypt and the FIFA World Cup in Qatar. Public trust in MENA governments is weak, thanks to their ... END_OF_DOCUMENT_TOKEN_TO_BE_REPLACED

Thanks to climate change, the Middle East is heating up faster than any other part of the world, putting the region's ancient pyramids, castles, holy and other heritage sites at ... END_OF_DOCUMENT_TOKEN_TO_BE_REPLACED

In the run-up to the COP27 global climate summit, hosted by Egypt in November, it is worth noting that little rainfall, aggressive heatwaves and worsening drought make the Middle ... END_OF_DOCUMENT_TOKEN_TO_BE_REPLACED

Hundreds of porters, locally known as ‘kolbars’, cross the mountainous border between Iran and Iraqi Kurdistan all year round. With Iran’s economic crisis deepening, ever more ... END_OF_DOCUMENT_TOKEN_TO_BE_REPLACED

Once again, political deadlock is driving thousands of Iraqis to Tahrir Square. They want new elections, but the parliament refuses to dissolve. Elected representatives are now ... END_OF_DOCUMENT_TOKEN_TO_BE_REPLACED

The clashes in Baghdad between supporters of Muqtada al-Sadr and pro-Iranian militias show that an intra-Shia power struggle is in full swing. An analysis from Cairo by Karim El- ... END_OF_DOCUMENT_TOKEN_TO_BE_REPLACED
Author:
Arnold Hottinger
Date:
Mail:
Send via mail

END_OF_DOCUMENT_TOKEN_TO_BE_REPLACED
Social media
and networks
Subscribe to our
newsletter