What are some of the things to watch for on election day, which could tell us something about the state of Lebanese politics in general?

One is undoubtedly related to Prime Minister Saad Hariri. This is especially relevant after the episode last November when Hariri was forced to resign while in Saudi Arabia, before backtracking on his resignation. Subsequently, the prime minister was again embraced by the Saudis, even if this did not imply that he would prioritise political alliances with those parties that had been part of the March 14 alignment, something the Saudis favoured.

Rather, Haririʹs decision to ally himself in the elections with the Free Patriotic Movement of President Michel Aoun and his son-in-law Gebran Bassil has proven resilient, and has been legitimised by Hariri as a way of drawing Aoun and Bassil away from their alliance with Hezbollah.

In part, Hariri sees his relationship with Aoun as a way of ensuring that he will return as prime minister after the elections. Haririʹs resignation in Saudi Arabia and its aftermath ended an inter-Christian rapprochement between Aoun and the second major Christian political party, the Lebanese Forces. The reason is that the Lebanese Forces came out of the affair looking as if they opposed the strengthened political ties between Hariri and Aoun, which had helped bring both men to power. 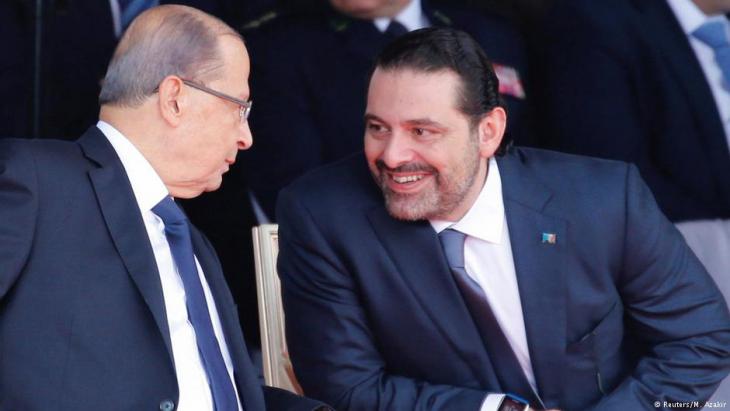 A debt of gratitude: Saad Hariri's surprise announcement of an intent to resign, broadcast on 4 November 2017 on Saudi state TV, was widely regarded as part of the Iran-Saudi Arabia proxy conflict in Lebanon, and triggered a dispute between Lebanon and Saudi Arabia. The resignation was later suspended, following President Michel Aoun's request to "put it on hold ahead of further consultations"

The relationship between the Christian parties will have longer-term repercussions in the run-up to the next presidential election in five years. Thatʹs because both are vying for the role of principal representative of Lebanonʹs Christians.

With regard to Christian leadership, one race in particular will have a bearing on what happens in the future. It could even be viewed as a primary for the presidential election. In the northern district of Bsharri-Zghorta-Koura-Batroun, three major Maronite Christian pretenders to the presidency will have a stake in the outcome, even if they are not necessarily candidates themselves: Bassil, the Lebanese Forces leader Samir Geagea, and the Marada Party leader Suleiman Franjieh. How each of these politicians fares will determine their appeal and legitimacy to possibly present themselves as successors to Aoun.

Overall, the March 8 alignment has proven much more adept than March 14 at averting fragmentation. However, that does not mean that there are no potential problems. Particularly significant will be what happens to the main Shia parties, Hezbollah and Amal. Many indicators suggest that the two have lost traction within their constituencies.

This could be a result of Hezbollahʹs participation in the Syrian conflict, which has drained the Shia community. It could be that the Shia, like all other Lebanese communities, are suffering from the shortcomings of their political representatives. Or it could be that the new election law has opened cracks through which rivals of the two parties within the Shia community could potentially enter political life.

Looking outwards with the knowledge from within: a conversation with the Iraqi writer Sinan Antoon on the future of his homeland. Interview by Lena Bopp END_OF_DOCUMENT_TOKEN_TO_BE_REPLACED

The Iranian people are being held hostage by the confrontation between America and the regime in Tehran. Stefan Buchen considers in his essay whether the country's culture can ... END_OF_DOCUMENT_TOKEN_TO_BE_REPLACED

With "The Enlightenment of the Greengage Tree", Shokoofeh Azar has created a beautiful, sad fable set in a horrible reality. While there are moments of hope to be found in the ... END_OF_DOCUMENT_TOKEN_TO_BE_REPLACED

From the Kingdom of Elam to Alexander the Great, to the Shah dynasties and the Islamic Republic, Iran's cultural sites reflect its long history. ... END_OF_DOCUMENT_TOKEN_TO_BE_REPLACED

The assassination of the Iranian general Qassem Soleimani in a surprise U.S. drone strike is being used by the Islamic Republic of Iran to political ends, says Iranian journalist ... END_OF_DOCUMENT_TOKEN_TO_BE_REPLACED
Author:
Joseph Bahout
Date:
Mail:
Send via mail