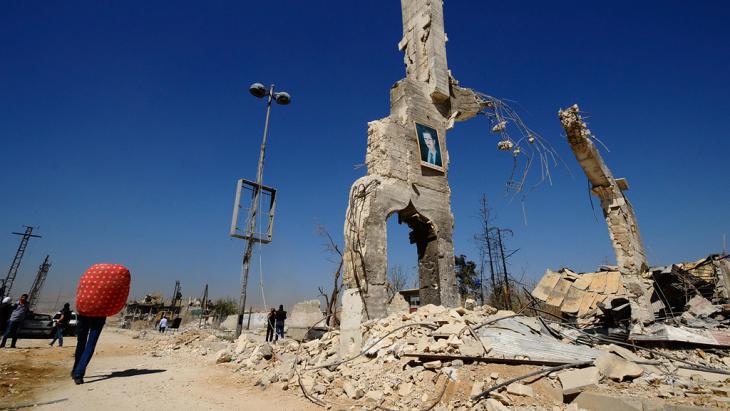 A comprehensive solution to the Syria conflict is still a distant prospect. And "freezing" the fighting will not succeed without UN monitoring. If the suffering of the people is to be alleviated and a foundation of trust laid for negotiations, local initiatives must be implemented with international support, says Kristin Helberg

"Peace strategies" is a grand phrase. Too grand for what is happening in Syria and the surrounding region at the present time. But talks are nevertheless taking place and yielding new ideas that could alleviate the Syrians' suffering to some extent – as long as these concepts receive more than just verbal backing.

Three developments are unfolding in parallel. Firstly, Russia is trying to bring representatives of the regime and opposition to the same negotiating table in Moscow. Secondly, the key opposition groups are discussing a timetable for gradual regime change in Damascus. And thirdly, the UN's special envoy to Syria, Staffan de Mistura, is lobbying for the "freezing" of the conflict on a local level to halt the advance of Islamic State (IS) and pave the way for negotiations.

At first glance, none of this sounds especially original, but those who look more closely will spot a few opportunities. One of those is in Moscow, although not because of the conference. In the current situation, talks between the regime and the opposition are a waste of time. President Bashar al-Assad is refusing to relinquish any power, and no credible opposition member is willing to join a government led by Assad. In any case, both sides can exert only limited influence on the war in Syria.

That the rebels in Syria don't care what a national coalition abroad decides, became apparent at the latest at the last failed Syria conference in February 2014. Since then, however, Assad too has lost control of the forces battling on his side. The regime is running out of money and soldiers. 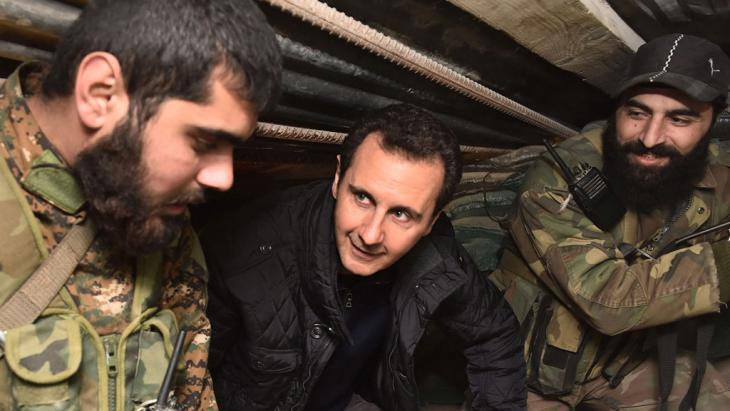 President Assad visiting the Popular Defence Forces in Joubar near Damascus. "Some opposition members who have travelled to Moscow in recent weeks tried to make this clear to Kremlin representatives: Assad cannot stabilise Syria; he cannot defeat the terror and bring peace to the nation, because he is no longer 'in control', but dependent on others."

Apart from a few elite units controlled directly by the president, the Syrian-Arab Army no longer exists. The remaining troops are directed by Iran, and the Lebanese Hezbollah and National Defence Forces (NDF) are fighting alongside them, the latter being local militia that have evolved from the Shabiha and vigilante groups organised along sectarian lines. Partially through the defence of particular regions and income generated by smuggling, protection rackets and abductions, the leaders of these militias have become so powerful that they simply ignore any orders from Damascus that run contrary to their interests. Assad's omnipotence is crumbling.

And this is precisely the essence of the opportunity with Russia. Some opposition members who have travelled to Moscow in recent weeks tried to make this clear to Kremlin representatives: Assad cannot stabilise Syria; he cannot defeat the terror and bring peace to the nation, because he is no longer "in control", but dependent on others. The fact that he can hold certain areas and win back others is thanks to his foreign backers, not his support at home. Even many Alawites from coastal regions are tired of sacrificing their sons to keep Assad in power – anyone fighting voluntarily is only doing so to protect his own people in Lattakia and Tartous, not to win back Raqqa from Islamic State.

Moscow's attempt to divide the opposition in a bid to encourage individuals to join a pseudo unity government led by Assad will (hopefully) fail. The three most important groups – the National Coalition of Syrian Revolutionary and Opposition Forces, the National Co-ordination Committee for Democratic Change and the movement known as Building the Syrian State – are still haggling over a joint plan. One thing they do agree on, however, is that Assad's withdrawal cannot be a precondition for talks, but that it is likely to be the logical consequence of a genuine political transition. 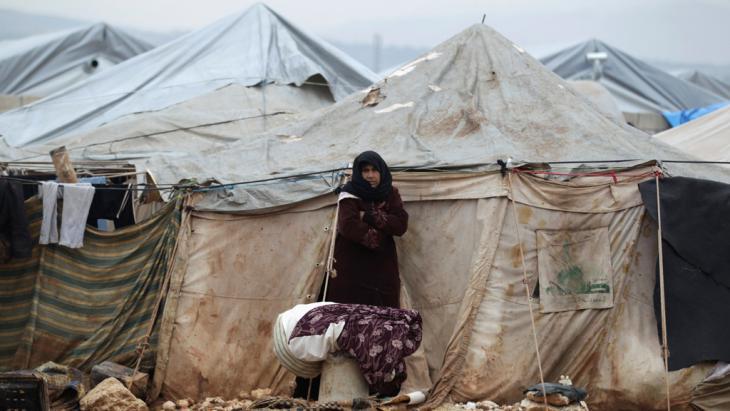 Horrific statistics: the UN special envoy to Syria, Staffan de Mistura, says that 220,000 people have died in the civil war, which has now been going on for almost four years. The UN says more than 10 million Syrians have fled the violence

So it is now up to Moscow to rethink and realise that saving the Syrian state is not bound up with Assad's retention of power. On the contrary, anyone wanting to preserve state structures in Syria must campaign for a gradual redistribution of power; not on a grand scale, but on a small one.

Which brings us to the third point, the "freezing" of fighting and the experience of local ceasefires. Staffan de Mistura has recognised that one comprehensive solution to the conflict is currently unrealistic. His idea of first suspending fighting in Aleppo sounds good – everyday life without barrel bombs and snipers would be a huge relief for local residents. However, a long-term ceasefire appears unrealistic as long as the right lessons are not learned from the experience of ceasefires to date.

For a better understanding of the situation, it is important to know the following: in Syria there are dozens of local initiatives around the country where civil players, rebels, regime representatives, army and the aforementioned NDF are, in a variety of constellations, negotiating ceasefires. In recent months, several studies have investigated the genesis and the use of these agreements and despite differing theories, reach similar conclusions.

Firstly, most of the ceasefires are forced into being by the regime sealing off, starving and massively bombarding a region.

Secondly, the regime often imposes conditions that are tantamount to capitulation for local opposition and rebel groups.

Thirdly, the implementation is neither formulated in sufficient detail nor monitored by an independent authority, which means that agreements are not fulfilled or are even broken completely (not enough humanitarian aid, incomplete evacuation of civilians, subsequent arrest or shooting of rebels, a renewed sealing off of the region).

Fourthly, radical groups or regional supporters (Iran, Turkey) on both sides prevent or undermine the process of reaching an agreement if it endangers their own interests.

Fifthly, all conflict parties often only use the ceasefire to bolster their weapons stores for further fighting. All of those involved lack a commitment to peace. 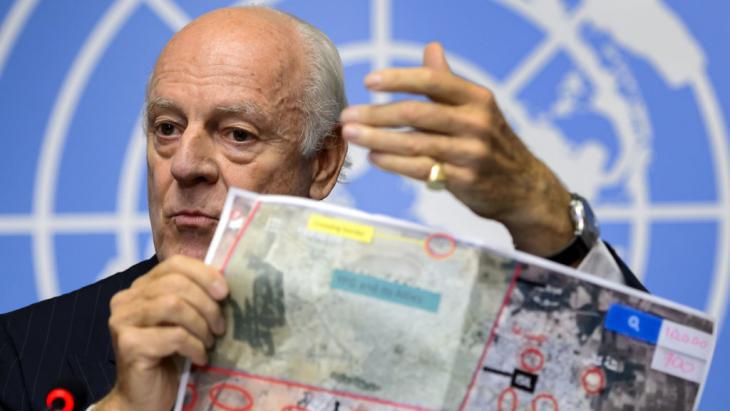 The UN special envoy to Syria, Staffan de Mistura, has welcomed the Syria conference in Moscow as a serious initiative. He said that a sustainable dialogue between the conflicting parties could be started at the meeting. De Mistura is currently lobbying support for his plan to "freeze" the conflict. However, he has had to concede that so far, no party has agreed to back his concept for de-escalation

Arguments for a locally negotiated ceasefire

The local approach is, however, the right one. After all, the readiness to negotiate with the enemy and reach compromises is considerably greater among the war-weary citizens at local level than among politicians and commanders, who are far away from the action and impose unrealistic maximum demands, thereby prolonging the conflict. In addition, living conditions, social make-up and political and military power relationships in Syria vary so much from region to region that there can be no universally applicable solution.

Solutions ordered from above come to nothing. Instead civil players on the ground – local committees, municipal and local council representatives, religious dignitaries, influential businesspeople, village elders and tribal leaders – should be bolstered. This is because studies have also shown that ceasefires come about and focus on the interests of the population in those places in particular where there are well-defined civil structures.

The consequent vision looks like this: a ceasefire is negotiated locally, but implemented and monitored by a neutral authority with a robust UN mandate. This authority also controls and finances the functionality of administration and infrastructure. Citizens' services, courts, police forces, electrical substations, water authorities etc. continue to operate, are reformed or re-built. The aim is to maintain state structures without these being taken over by the Assad regime. In this way, a ceasefire develops into a credible political alternative with functional everyday application and an effective message: negotiating is worthwhile!

But as long as de Mistura talks about "freezing" the fighting in order to launch a joint campaign against IS, it is evident that he has not understood the dynamic of recent months. Fighting the jihadists' terror and simultaneously ignoring Assad's terror only serves to further radicalise the Syrians – civilians and rebels alike. Assad bears the main responsibility for the violence in Syria, and for this reason, we must not lose sight of the end his rule.

Local truces do indeed provide the opportunity to gradually create new power balances of power. For this reason, de Mistura should do everything in his power to win the backing of the UN Security Council – including Russia – for these ceasefires.

Home
Print
Newsletter
More on this topic
Strategies against Islamic State: The case against an alliance with AssadSyrian refugees in Lebanon: "We will perish here!"Civil war in Syria: Everyday life in a country destroyedThe kidnapping of the "Douma 4": The Salafist and the human rights activist
Related Topics
'Islamic State' | IS, Arab Spring, Arabellion, Assad regime, Hezbollah, Syrian Civil War, Syrian opposition, U.S. policy in the Middle East, United Nations (UN)
All Topics

The Arab world suffers from a system in which people are intolerant of "the other". This racist environment contributes to the growth of hostility and antagonism towards anyone ... END_OF_DOCUMENT_TOKEN_TO_BE_REPLACED

Why do so many people in Arab countries trust the armed forces, even though most armies in the region are highly corrupt? Abdalhadi Alijla has the answers END_OF_DOCUMENT_TOKEN_TO_BE_REPLACED

Renowned Jordanian Islamic scholar Fehmi Jadaane vehemently objects to the transformation of Islam into an ideology. The religion ends up mired in a political swamp, he says, its ... END_OF_DOCUMENT_TOKEN_TO_BE_REPLACED

The COVID-19 pandemic has triggered a public-health emergency and a steep reduction in oil prices, which represents a perfect storm for the Middle East, where everything from ... END_OF_DOCUMENT_TOKEN_TO_BE_REPLACED

Churches in the Middle East – Coptic, Eastern Orthodox, Maronite – typically share the conservative values of their Islamic surroundings. Yet the resistance of Arab Christian ... END_OF_DOCUMENT_TOKEN_TO_BE_REPLACED

Saudi Arabia has called on Muslims across the world to put their hajj preparations on hold for the time being. The corona pandemic is impacting one of the central pillars of ... END_OF_DOCUMENT_TOKEN_TO_BE_REPLACED
Author:
Kristin Helberg
Date:
Mail:
Send via mail

END_OF_DOCUMENT_TOKEN_TO_BE_REPLACED
Social media
and networks
Subscribe to our
newsletter