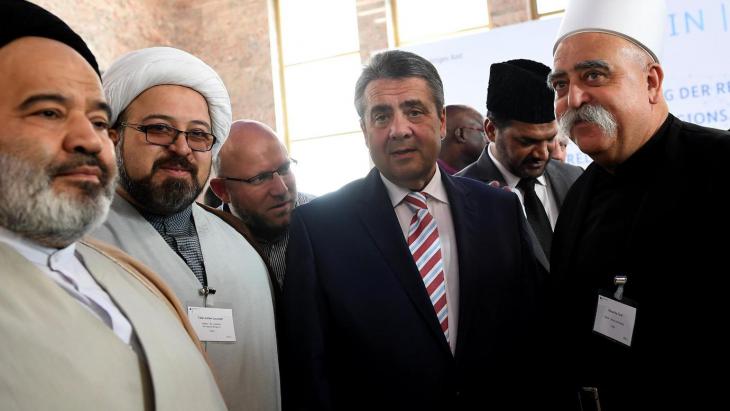 German Foreign Minister Sigmar Gabriel recently invited around a hundred representatives of religious communities in North and West Africa, the Middle East and Europe to attend a confrence in Berlin. In future the Foreign Office is aiming to co-operate more closely with religious communities. By Christoph Strack

Last Monday, German Minister of Foreign Affairs Sigmar Gabriel met with religious dignitaries and scholars from around the world at the Federal Foreign Office in Berlin – in particular Islamic scholars from Iran and Afghanistan, Jewish representatives from Jerusalem, Catholic archbishops, Orthodox clergymen and Protestant pastors, Anglicans and Copts, Baha'is, Sufis and Druze, Shias and Sunnis – many men, fewer women.

"Participants exercise influence and authority in their communities and are committed to working for peace both within and among societies," read the announcement published by the Foreign Office.

For German diplomats, the conference is an unusual step beyond the normal role of state actors on the international stage. They will engage with non-state actors as a complementary resource to traditional diplomatic means. An independent area of operations has even been established in the Foreign Office to that end.

The history of the conference goes back to the attacks on New York and Washington on 11 September 2001. Those attacks changed global diplomacy. In 2002, Germany's then foreign minister, Joschka Fischer, established the ambassador-level post of Representative for Dialogue with the Islamic World. After the change of administrations in 2005, the Federal Foreign Office rebranded the post as the Special Representative for Intercultural Dialogue.

Some 10 years ago, the U.S. State Department established a sub-department for religious affairs. Some foreign offices in other European countries have also taken a similar approach.

And now it is Berlin′s turn. The Foreign Office says that the recent conference and the new operations area are "not an expansion, but rather a new approach." Representatives say they are looking to engage in partnerships and social projects, essentially pre-political undertakings. They are interested in establishing a structured exchange with religious actors. 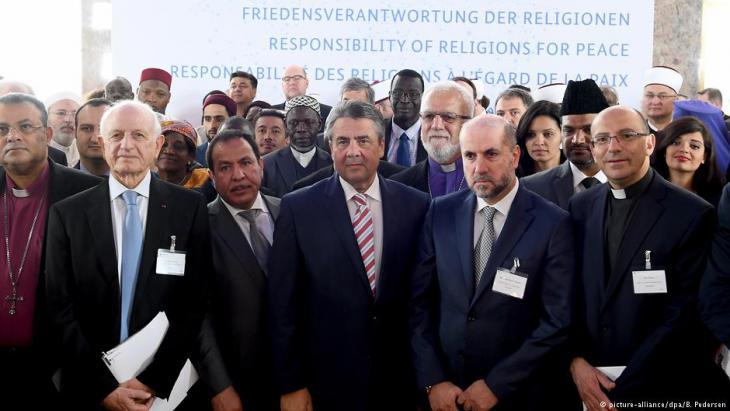 Peace responsibility of religions: it was the first time that Berlin had hosted such an event. More than 100 religious representatives from 53 countries attended the two-day conference. They represented Judaism, Christianity and Islam, not to mention other religions from across Europe, the Middle East and North and West Africa. In future, the federal government aims to work more closely together with religious representatives regarding peace responsibility, placing the emphasis on schools and universities, conflict mediation and public relations

The Heidelberg-based sociologist Ines-Jacqueline Werkner, who counts international politics and peace studies among her areas of expertise, points to the Treaty of Lisbon when speaking of the topic. In an aside to the 2007 treaty, the EU committed itself to open, transparent and regular dialogue with religious organisations – this, too, she says, testifies to the importance of non-state actors. Political scientists have long suggested harnessing the positive potential of religion.

″The only relevant societal players″

"Publicly, the subject of religion has tended to be seen from a one-sided perspective – namely, religion as the source of conflict," admitted Werkner. But religions' obligation to facilitating peace has long enjoyed a positive significance among diplomats. In conflict zones, religious actors are often "the only relevant societal players" – with knowledge about dealing with problems, integration and respect among local populations.

The conference at the Foreign Office featured a prime example of this type of engagement. Among the guests was Mauro Garofalo, responsible for international relations at the Community of Sant'Egidio, a Catholic organisation. In 1992, Christian lay people managed to achieve what international diplomats had failed to do: after 16 years of civil war and almost one million deaths, they negotiated a peace agreement between warring factions in Mozambique.

To this day, that feat is still considered a milestone of what civil engagement can achieve on the diplomatic stage. In his 2014 book "Was Frieden schafft" (What Creates Peace), peace researcher Markus Weingardt lists ten further examples, among them Sierra Leone, the Congo and Cambodia. 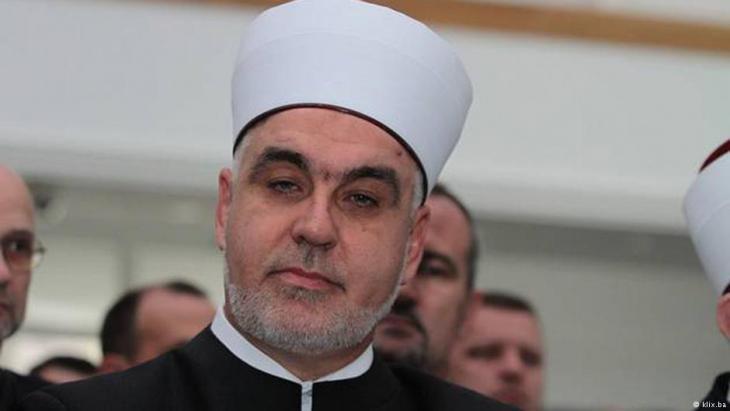 Against the political instrumentalisation of religion by radical forces: the grand mufti of Bosnia and Herzegovina, Reis-ul-ulema Husein Kavazovic, emphasised that Islam is a peaceful religion. Those in positions of religious authority must work to combat abuse. The grand mufti from Sarajevo was at pains to point out that all around the world, peace is in danger

It is therefore fitting that local religious representatives were also invited to the Foreign Office. For instance, the grand mufti of Bosnia and Herzegovina and the president of that country's Jewish community both travelled from the formerly multi-religious city of Sarajevo – which still seeks to uphold that tradition. The archbishop of Conakry and the grand imam of Guinea were also in attendance. As were representatives from the Catholic commission Justitia et Pax and a leading Islamic representative. The Foreign Office is looking to strengthen support on the ground for such developments.

Berlin's Foreign Office is also seeking to mediate on a cultural level. In 2016, the office initiated a debate series dealing with the new world order – and disorder – called "Berlin Correspondence", in co-operation with the city's Maxim Gorki Theatre. The then foreign minister, Frank-Walter Steinmeier, spoke at the series' opening, posing the question of whether "forces existed that could set in motion great tectonic shifts in our concepts and models of order."

Steinmeier called for action in the "difficult work of creating a common order" – work that would include major narratives and the patterns of their transmittance. That was on 22 May 2016. Now, one year later, Sigmar Gabriel is attempting to take this ideal to the global diplomatic stage.

Home
Print
Newsletter
More on this topic
Pope Francis’ visit to Al-Azhar: Who holds sway over religious identity?Comparative Theology in Germany: Muslims and Christians discussing NietzscheUniversity of Munster: Appealing to the world for peace
Related Topics
9/11, Dialogue of Cultures | Intercultural Dialogue, Dialogue of Religions, Freedom of religion, Islam and the West, Places of Dialogue
All Topics

Giessen, Eichsfeld, Kusel, Berlin – cars bearing old German number plates are the latest trend on the streets of Cairo. Many Egyptians regard the discarded plates as chic. What ... END_OF_DOCUMENT_TOKEN_TO_BE_REPLACED

Tunisia has been going through a severe economic and political crisis in recent years. More than one in three young people there are unemployed. For many skilled, qualified and ... END_OF_DOCUMENT_TOKEN_TO_BE_REPLACED

German imams have publicly expressed their solidarity with the women of Afghanistan. In a letter of protest, the clerics say that the Taliban regime's decree barring women from ... END_OF_DOCUMENT_TOKEN_TO_BE_REPLACED

At the end of every year, the team at Qantara.de gives you a run-down of the ten most-read articles on the site over the past 12 months. Here is a quick overview of the stories ... END_OF_DOCUMENT_TOKEN_TO_BE_REPLACED

Social engagement is often motivated by religious factors. A new book explores the background to these community efforts and appraises how effective they are in helping to ... END_OF_DOCUMENT_TOKEN_TO_BE_REPLACED

The government in the Netherlands, one of the last European nations to abolish slavery, has made an historic apology. But some feel that there is still a long way to go. By Ella ... END_OF_DOCUMENT_TOKEN_TO_BE_REPLACED
Author:
Christoph Strack
Date:
Mail:
Send via mail

END_OF_DOCUMENT_TOKEN_TO_BE_REPLACED
Social media
and networks
Subscribe to our
newsletter