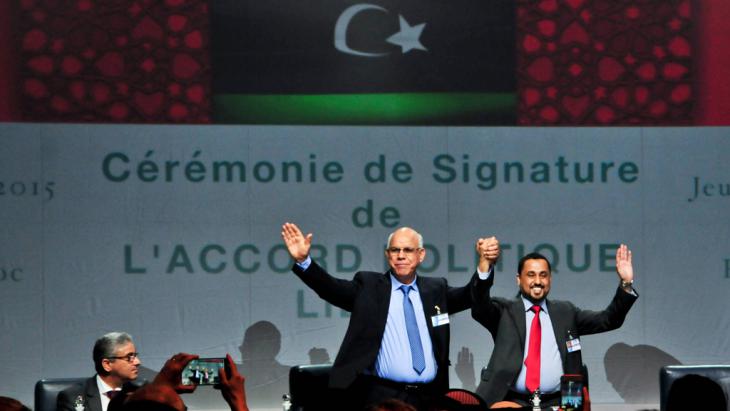 The steep road to national unity

Although the event was not the main focus of international attention, the agreement signed by Libya′s rival factions in the Moroccan coastal city of Skhirat this week is perhaps more important for Europe than the European summit meeting that took place the same day. By Karim El-Gawhary

Amidst all the turbulence between rival groups in the North African country, it has been IS that has consolidated its influence over the past few months, especially in Gaddafi′s native city of Sirte. It has even been rumoured that the IS leadership could move to Libya if the military situation in its Syrian headquarters in Raqqa becomes unsustainable. In addition, Libya remains a significant and completely uncontrolled departure point for refugees to Europe.

With this in mind, the efforts of German negotiator Martin Kobler, who served here as UN envoy to the talks and was crucially involved in the Libyan agreement, cannot be seen as totally disinterested from the European point of view.

Just a split second for dialogue?

Essentially, what the country′s two competing power centres signed last Thursday entails the creation of a nine-member presidential council, which will represent the various regions of the country and form a government. The parliament in the east of the country will have legislative authority and a state council will form a second, consultative chamber. In one month, the new unity government should be established and its legitimacy will be confirmed by UN resolution.

That, at least, is the plan. If it works, then Libya will soon once again have a single government that can then administer the country′s oil revenues. It would also serve as an international point of contact. The government would be authorised to set up a national army that could take action against IS and even apply for foreign military assistance in this struggle. 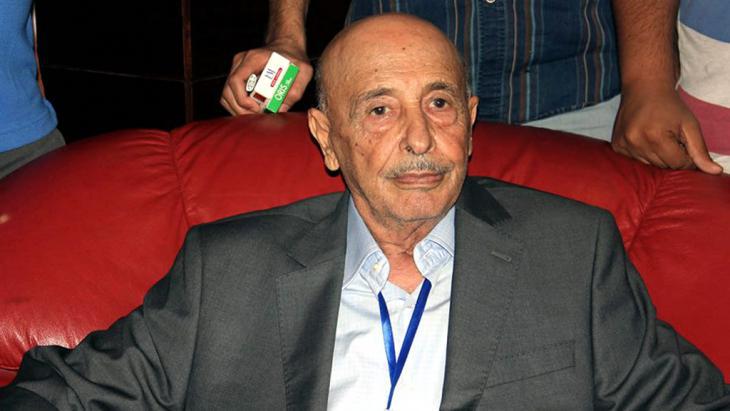 Growing resistance to the UN peace plan: Akila Saleh, one of the leading Libyan politicians and president of the internationally recognised parliament in the East Libyan town of Tobruk, refused to acknowledge the document, claiming the treaty was unconstitutional and a violation of ″national dignity"

All this, however, is still far off. At the very best, the new agreement will foster momentum for dialogue, through which a real consensus could be formed in Libya. In the worst case scenario, these efforts could backfire and instead of only two main centres of power in the country, there would then be three.

The deal was signed by the deputy speakers of each of the rival parliaments. The deputies of both chambers were not part of the agreement and they are still attempting to cobble together their own settlement without, as they claim, any international meddling. For this reason, the UN sponsored deal has not been approved by either of the two parliaments. Only individual parliamentarians have signed the document. In reality, the agreement is still a massive work in progress, a patchwork deal, a list of signatories that, at best, will only grow in the coming weeks.

The main problem is that no one really knows exactly who in Libya represents whom. The most simplistic reading of the situation is that until now two governments have claimed the right to represent the country. One is based in the capital Tripoli and is seen as Islamist, while the other, internationally recognised government, is in the city of Tobruk in the east of the country. Both are supported by local alliances and militias, more out of tactical than ideological grounds. And now, the IS has entrenched itself on the frontlines between these two rivals and is expanding to fill the power vacuum.

As previously mentioned, this is the simple version of events. The reality is far too complicated to describe in just a few sentences. The North African country is a chaotic web of local centres of power, groups and militias, which even undermine some tribes. For a long time now, state institutions have only existed on paper. Every one of these numerous centres of power is pursuing its own agenda and forms tactical alliances with larger groups as the situation demands.

"There is a minority on all sides that wants to torpedo the peace agreement and the peace process as a whole,” said Germany′s foreign minister, Walter Steinmeier, after the signing ceremony. The security situation in the capital Tripoli remains fragile. And that′s putting it mildly.

Home
Print
Newsletter
More on this topic
Interview with Alaya Allani, an expert on Islamism: "The jihadists have no social base in Libya"Civil war in Libya: A stateless society Political rule before and after the ″Arabellion″: Internal colonialism and counter-revolution
Related Topics
'Islamic State' | IS, Arabellion, Libya after Gaddafi, Refugees, United Nations (UN)
All Topics

Political analyst Taqadum al-Khatib argues that Egypt can, in co-ordination with its European partners, develop a common vision to solve the complex conflict in Libya. For this to ... END_OF_DOCUMENT_TOKEN_TO_BE_REPLACED

Libyans have mixed feelings about the EU. On the one hand, they admire what Europeans have achieved, but on the other, they feel let down. Moutaz and Walid Ali report from Tripoli END_OF_DOCUMENT_TOKEN_TO_BE_REPLACED

Libya is in turmoil and no political solution is in sight. The EU's inability to take concerted action in the country, meanwhile, is being exploited by third parties, such as ... END_OF_DOCUMENT_TOKEN_TO_BE_REPLACED

In the wake of the Arab Spring, not one Arab dictator has faced charges for creating a police state and inducing terror among citizens. Similarly, none has been prosecuted for ... END_OF_DOCUMENT_TOKEN_TO_BE_REPLACED

Facing the risk of exploitation, violence and torture, aid groups warn Libya is not a safe country for refugees. They argue that is reason enough for the EU not to send asylum- ... END_OF_DOCUMENT_TOKEN_TO_BE_REPLACED

In their field journal “The Crack” photographer Carlos Spottorno and journalist Guillermo Abril report the unfolding of Europeʹs migrant crisis from Africa to the Arctic over the ... END_OF_DOCUMENT_TOKEN_TO_BE_REPLACED
Author:
Karim El-Gawhary
Date:
Mail:
Send via mail