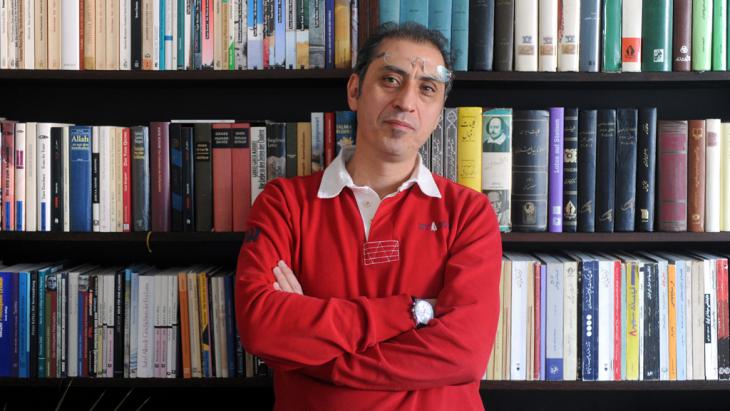 Madjid Mohit was one of those publishers and literary figures to flee Iran and its strict policy of censorship at the beginning of the nineties. These days he sells literature with ″aerial roots″ in Bremen. He was recently awarded the Hermann Kesten Prize by Germany′s PEN Centre for his untiring work promoting the work of authors in exile. By Sarah Judith Hofmann

Madjid Mohit left Tehran and landed at Frankfurt Airport with a fake passport. That was 25 years ago. He spent the next three years waiting in an asylum centre not knowing whether his asylum application would be approved or not. He also spent that period of time not knowing if he would ever be able to pursue his career again – the vocation which meant everything to him and led him to risk everything in Iran.

If you had asked him at the time what he hoped to gain from Germany, Mohit muses, he would have answered that the only thing he hope for was patience. A quarter of a century later, Mohit is standing on the stage of the Staatstheater Darmstadt, just a half hour away from Frankfurt Airport. He's there to receive recognition for his achievements in the very profession he did not want to give up: that of publisher.

The president of Germany′s PEN Centre, Josef Haslinger, presented the Hermann Kesten Prize to Madjid Mohit on Wednesday (11.11.2015). The award given by the writer's association PEN (the abbreviation stands for Poets, Essayists and Novelists), is endowed with a cash prize of 10,000 euros ($10,740). The award is named after a former honorary president of the PEN Centre, Hermann Kesten (1900-1996), and has been awarded since 1985 to honour the "special services of persecuted writers." It is also sponsored by the Hessian Ministry for Science and Art. Previous winners include Gunter Grass, Anna Politkovskaya and Liu Xiaobo.

Literature from Iran – with aerial roots

This year's accolade went to Madjid Mohit for his outstanding work as a publisher in exile. He established his publishing company, Sujet, in 2008 in Bremen, the German city where he now lives. "Sujet" means "subject" in French and in Persian too. Mohit has a favourite subject as a publisher: freedom. It's not that all the books he publishes are about freedom, but without him these authors might have never been read.

At the beginning, Sujet would publish mainly Iranian authors who were banned in their home country. Literature with "aerial roots" is what Mohit calls these works from Iran. Many of the authors live like him in Germany, as they had to flee the censorship and repression in Iran since the 1979 Islamic Revolution. 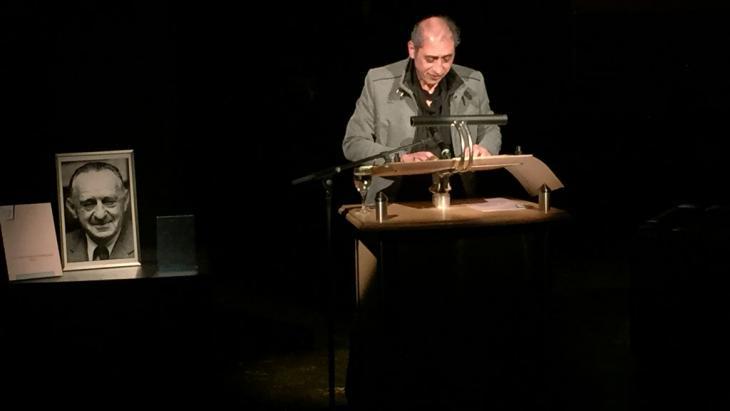 Bridge between Orient and Occident: Madjid Mohit, the Iranian-born publisher, received the PEN Centre′s 2015 Hermann-Kesten Prize on 15 November for his ″on-going and impressive work for authors who don′t live in their home country″. Much of Mohit′s work as a publisher focuses on literature penned by exiled Iranians, which he himself describes as literature with ″aerial roots″

Mohit remembers seeing 3,000 copies of the book "Hundred Years of Solitude" by Gabriel Garcia Marquez being destroyed when he was 18 years old. It is still one of his favourite books today. These authors who have found a second home in Germany "enrich the local culture of the country," said the PEN Centre.

Publisher of vision and many talents

The publishing company Sujet has also broadened its mission, as it now publishes Persian literature in German and German literature in Persian. In a speech during the award ceremony, author Inge Buck explained that Mohid "comes from a family of publishers. His grandfather prepared the first Persian-German dictionary and his father, head of Mohit Publishing in Tehran, published it in 1958."

Madjid Mohit is not just a publisher with a vision. He also writes poetry and music. He sings both in German and Persian, while playing the guitar.

People who are now coming to Germany from Syria, Eritrea and other countries will also need to be patient, said Mohit in his acceptance speech. To give him courage when he arrived, he spent his time reading "Hundred Years of Solitude." "Literature can teach us to break away from our own existence and to join the experiences of others, which are larger than our own," he added. "Through literature, you get to know humanity, because literature is nothing without humans."

The Kurdish YPG militia did the heavy lifting in the fight against the "Islamic State", yet many foreign YPG adherents, including Germans, have come home to find themselves under ... END_OF_DOCUMENT_TOKEN_TO_BE_REPLACED

Few Muslims have to date visited the Auschwitz-Birkenau concentration camp memorial site. Now high-ranking representatives of Muslims and Jews are travelling together to the place ... END_OF_DOCUMENT_TOKEN_TO_BE_REPLACED

The terror attacks in Paris, Brussels and Berlin were all carried out by men radicalised in jail. In Germany, politics and the judiciary are trying out new approaches to prevent ... END_OF_DOCUMENT_TOKEN_TO_BE_REPLACED

Elke Muller is fighting for her daughter Anna, who fell in love with a young Afghan and converted to Islam. The mother spoke to Esther Felden about feeling alienated and her fear ... END_OF_DOCUMENT_TOKEN_TO_BE_REPLACED

As historian Wiiliam Dalrymple writes in his essay, scholars are only now beginning to realise the extent to which the Mughal emperors adopted what most would assume to be ... END_OF_DOCUMENT_TOKEN_TO_BE_REPLACED
Author:
Sarah Judith Hofmann
Date:
Mail:
Send via mail