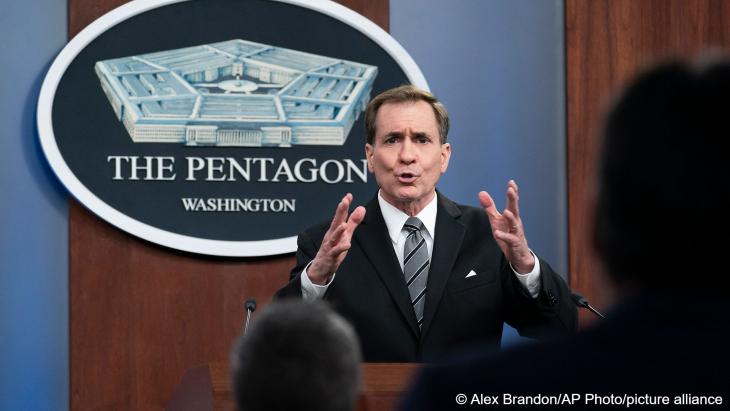 A U.S. military investigation found that American troops did not violate the law of war or deliberately cause civilian casualties in a 2019 airstrike in Syria that killed dozens of people, including women and children. It did find that the military committed procedural mistakes in the aftermath of the attack.

The Pentagon said on Tuesday that no one, including the ground force commander, was disciplined as a result of the strike, which was launched in support of Syrian partner forces who were under hearvy fire from the Islamic State group near the town of Baghouz, in eastern Syria.

Defence Secretary Lloyd Austin, who ordered a new review of the airstrike last November, said he was "disappointed" with deficiencies in the handling of the initial review of the operation, which missed deadlines and led to delays in reporting to Congress and the public about civilian casualties.

"The process contributed to a perception that the Department was not committed to transparency and was not taking the incident seriously – a perception that could have been prevented by a timely review and a clear explication of the circumstances surrounding the strike," Austin said in a memo released on Tuesday.

The investigation comes amid new scrutiny on the U.S. military for strikes that cause innocent deaths. And it has all prompted Austin to order the department to create a new "Civilian Harm Mitigation and Response Action Plan" to better prevent civilian deaths in military operations. He also ordered Army Gen. Michael Garrett, currently the head of U.S. Army Forces Command, to do an independent review of the Baghouz strike.

Late last year, another independent review concluded that a U.S. drone strike that killed innocent Kabul civilians and children in the final days of the Afghanistan war was not caused by misconduct or negligence.

It found breakdowns in communication and in the process of identifying and confirming the target of the bombing.

The strike killed a long-time employee of an American humanitarian organisation and nine of his family members, including seven children.

The U.S. has promised to pay financial reparations to the family and potentially get them out of Afghanistan, but none of that has happened yet.

In the Tuesday memo, Austin directed department leaders to meet deadlines in reporting civilian casualties, conduct thorough reviews, and reinforce the importance of the procedures to commanders across the force.

The initial investigation into the attack concluded that the strike constituted legitimate self-defence in support of Syrian partner forces under fire from the Islamic State group. Garrett, in his investigation, agreed with that conclusion.

Of the civilians, one female and three children were killed, and 11 women and four children were wounded. One of the enemies killed was a child.

Asked why no-one was being held personally accountable for the civilian deaths, Pentagon press secretary John Kirby said Tuesday that Austin was holding the department accountable, and that's why he ordered changes in the process.

"I understand the questions about accountability, I get it," Kirby told Pentagon reporters. "In this case, General Garrett found that the ground force commander made the best decisions that he could, given the information he had at the time, given a very lethal, very aggressive (Islamic State) threat, in a very confined space. It is deeply regrettable ... we apologise for the loss of innocent life."

Garrett, in an unclassified summary of his report, said that the ground force commander "did not deliberately or with wanton disregard cause civilian casualties". He said the decision to strike was necessary to defend the Syrian Democratic Forces and that "multiple efforts to distinguish civilians" from Islamic State insurgents were made.

Garrett added, however, that information not available to the commander at the time, showed that he relied on data "that was not fully accurate". But he said the commander's actions can't be judged on information available only in hindsight.

Garrett, in his review, also said that while he found problems with policy compliance, he "found no evidence to support the allegation that these deficiencies were malicious or made to conceal decisions or actions".    (AP)

More on this topic
U.S. drone strike wiped out Kabul family, brother saysHisham A. Hellyer on "the War on Terror": "You cannot rely on the West"Slaves of Islamic State: The fight to find the missing Yazidis
Home
Print
Newsletter
MoreAll Topics

END_OF_DOCUMENT_TOKEN_TO_BE_REPLACED
Social media
and networks
Subscribe to our
newsletter