Skip to main content
Persecution of Ayatollah Boroujerdi in Iran

The State Fears the Traditional Clergy

The case of the traditionally oriented but politically critical Ayatollah Boroujerdi shows that the alliances among the clerics in Iran are becoming increasingly fragile. The calls for a separation between state and religion are getting louder. By Ghasem Toulany 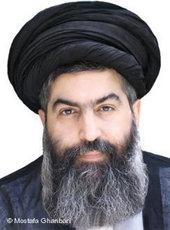 ​​A prominent Iranian cleric is under threat of execution. Ayatollah Seyyed Hossein Kazemeini Boroujerdi has been in the notorious Evin prison in Tehran since October 2006.

According to a statement by the Paris-based International Federation for Human Rights (FIDH), Ayatollah Boroujerdi and seventeen of his followers were sentenced to death on June 10th by a "Special Court of Clerics."

Over the last few days, many Iranian bloggers have reported the death sentence against Ayatollah Boroujerdi. But the semi-state news agency ILNA quoted a spokesman for the Special Court, denying reports of a death sentence, and saying that the court had not yet handed down its verdict on the Ayatollah and his supporters.

If it is indeed true that Ayatollah Boroujerdi has been sentenced to death by his fellow-clerics in the Islamic Republic, it would be due to the fact that he has fundamentally called the rule of the Mullahs in his country into question.

Since the founding of the Islamic Republic in 1979, the country has been ruled by the Ayatollahs, and clerics who want to see a separation of religion and politics have found their views unwelcome.

This is not the first time that clerics who are critical and "traditional" have been pursued by the Islamic state. Grand Ayatollah Montazeri, for example, whom Ayatollah Khomeini once named as his chosen successor, has been under house arrest for the last 16 years.

A few days before he was arrested, Boroujerdi said that he wanted people to be able to pray to God and praise him without any political involvement. The kind of non-political Islam he supports is officially seen as a kind of heresy.

Islamisation of politics, politicisation of Islam

Even before the victory of the Islamic Revolution in 1979, Ayatollah Khomeini had already laid out his doctrine of the "rule by religious scholars" ("Velāyat-e Faqih").

According to the doctrine, any government which is not approved by the scholars, who are the representatives on earth of the "hidden Imam" (the twelfth Imam of the Shiites), is illegal and not Islamic. But in fact, Shiite religious tradition is opposed to any mixing of religion and politics.

As a result, directly following the revolution, Khomeini's "Islamisation of politics" was greeted with little enthusiasm among the Ayatollahs. But after the establishment of the Islamic Republic Khomeini and his supporters were able to impose their views on rule by religious scholars.

Supporters of a separation of politics and religion have since then often been brutally repressed. Especially since the election of Mahmoud Ahmedinejad as president two years ago, the regime has been particular tough against religious groups and communities which support a non-political kind of Islam.

Now, 28 years after the revolution, the calls for a secular order in Iran are becoming ever louder. Ayatollah Ahmad Chatami, a radical cleric close to the country's supreme religious leader, Ali Khamenei, and a leading member of the Council of Experts which chooses the country's supreme religious leader, recently warned in a speech in Tabriz in the North-west of Iran against the idea of a separation between politics and religion, which, he said, was widespread among "certain Mullahs."

Hasan Shariatmadari, the son of the late Grand Ayatollah Kazem Shariatmadari, who was a supporter of a non-political, traditional Islam, describes this warning as a sign of the crisis of legitimacy in the Islamic Republic.

Speaking to the Persian-language radio station, "Radio Farda", he said that, throughout its 1,400 year old history, Shia Islam had always held to its principle of the independence of religious schools and the separation between religion and politics.

While there is always lively protest at home and abroad among opposition groups and activists whenever a figure from the political opposition is arrested in the Islamic Republic, the case of Ayatollah Boroujerdi and his supporters has scarcely been noticed.

The fact that a large part of the population – avbove all students and activists in political groups – have turned their backs on the clerics and religion seems also to be a result of the totalitarian rule of the Mullahs.

Ayatollah Boroujerdi, who calls the Islamic Republic a "dictatorship by the clergy" and speaks of a separation of religion and politics, is now trying to win back "the lost reputation of religion" in Iranian society.

While Mohammad Chatami was president, reformers tried in their own way, but in vain, to achieve "independence of religion from the government," in that they tried to achieve a "religious government" (or "Islamic democracy") instead of a "state religion."

At the same time, the separation of politics and religion would mean the end of the Islamic Republic in its current form. The ruling Ayatollahs have evidently recognised the problem. With Mahmoud Ahmedinejad, the Ayatollahs have permitted a non-cleric to be elected to the presidency for the first time.

Before that – also for the first time in the history of the Islamic Republic – they had entrusted the post of speaker of the parliament to Golam Ali Hadad. This could have been intended to prevent the clerics from further losing respect as symbols of religion, even though, according to Hasan Shariatmadari, it is only a small group of Ayatollahs which are privileged to be involved in state matters.

"Many clerics in Iran miss freedom of thought and opinion," he says. "They do their best to defend a return to traditional religion." But attempts to re-establish the independence of the Shiite clerics, could mean that some of them, like Ayatollah Boroujerdi, may have to pay a high price.

Arrest of Sayyid Hossein Kazemeini Boroujerdi
An Ayatollah under Siege … in Tehran
The Tehran regime's persecution of a dissident Shi'a cleric and his supporters reveals not just its own ruthlessness but the depth of opposition to its rule, says Nazenin Ansari

Iran's Political Clerics
The Absence of a Credible Religious Authority
After 1979, the religious seminary establishment came to be considered a source of political legitimacy. But even though the Iranian regime consolidated its mastery of the Shiite network in the Middle East, the strategy is beginning to backfire, writes Mehdi Khalaji

Mesbah Yazdi Supporters in Iran
Seizing Power
In the Islamic Republic, both liberal and conservative religious leaders warn that the "secret party" of Ayatollah Mesbah Yazdi's followers is trying to take over the Council of Experts as part of a stealthy coup. Behzad Keshmiripour looks into the details

END_OF_DOCUMENT_TOKEN_TO_BE_REPLACED
Social media
and networks
Subscribe to our
newsletter