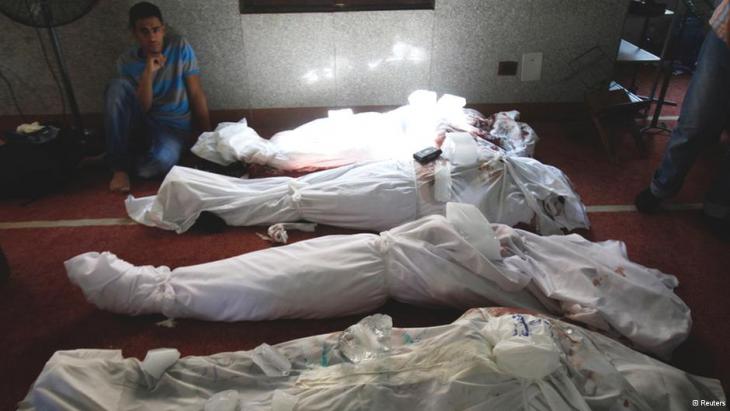 Persecution of the Muslim Brotherhood in Egypt
Humiliated even in Death

Hundreds of supporters of ex-President Mohammed Morsi were killed in Egypt last week. Judging by what Markus Symank witnessed during his visit to a Cairo morgue, it seems as if their relatives are being systematically bullied by the government

Five refrigerated trucks are parked in front of Cairo's central morgue. Their cargo: dozens, perhaps even hundreds, of dead bodies. Some of the dead were delivered by security forces last weekend; some have been here for six days, waiting to be collected. There is no room for any more bodies inside the building. Since the massacre of more than 400 supporters of deposed Egyptian President Mohammed Morsi at the hands of the police and the army on Wednesday, 14 August, the morgue has been hopelessly overcrowded.

Whenever an employee opens the door to a truck, the stench of decaying bodies fouls the air in the narrow alleyway. Neither the enormous piles of rubbish in the streets nor the scented candles and incense residents are using can mask the smell. "Even in death, the government is humiliating us," says the father of one of the deceased.

Ibrahim is one of five teenagers who arrived from Gizeh this morning to identify the body of a friend who has been missing since last Wednesday. All the family and friends knew was that the missing youth had been protesting against the military coup that day alongside other supporters of the Muslim Brotherhood at the University of Gizeh.

On Friday, his parents were phoned by the police, who told them that their son had been arrested and was being questioned. On Monday night, the phone rang again, this time it was the morgue. 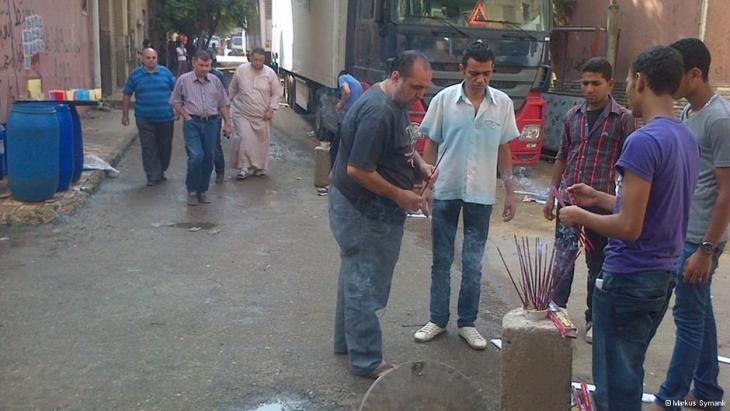 The morgue in the Cairo district of Sayyida Zainab is hopelessly overcrowded. Residents are lighting incense sticks and scented candles in an attempt to mask the horrendous smell of decomposing bodies

"His body is completely decomposed, I barely recognised him," one of the young men says, his face white with shock. He added that the coroners had cut open the body and taken out the heart and other organs. According to the teenager, he was told the organs were taken away for research purposes – without the family's consent.

His statements tally with reports from many other victims' relatives. Many families were not notified of the death of a loved one until a few days after the event. Some bodies were so mutilated that they could not be positively identified.

While worried relatives queue at the morgue to trawl through long lists of the deceased, state television repeatedly shows the funeral of the 25 police officers allegedly killed by extremists on the Sinai peninsula on Monday, 19 August.

The policemen received state funerals, their coffins draped in the national flag. Dignitaries from the influential Al-Ahzar mosque and government representatives attended to pay their last respects, accompanied by patriotic hymns.

Meanwhile the dead bodies piling up in the morgue are not mentioned by the Egyptian media. Reports about the stories of ordinary Egyptians who lost their lives are nowhere to be found in the newspapers. 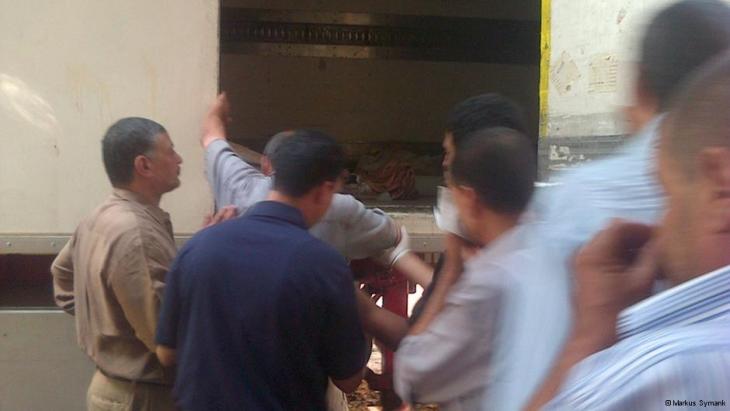 Although Islamic tradition dictates that the dead should be buried as quickly as possible after death, the morgues in Cairo are so full and the process of issuing death certificates is taking so long that the dead have to be stored in refrigerated trucks

Row over cause of death

The state-run media is also ignoring the humiliating treatment of the victims' relatives. The friends from Gizeh have been waiting for over two hours for the death certificate. Time is of the essence; after all, Islam stipulates that their friend should have been buried soon after his death. But the officials are demanding that the victim's friends accept suicide as the cause of death on the certificate, which the friends refuse, rejecting this explanation of his death as a "blatant lie".

When asked, the official does not want to comment on the incident. Reports by other relatives suggest this happens a lot, possibly to keep down official tallies of the number of people killed. Human rights activists believe that the death toll is much higher than official figures suggest.

The residents who live near the morgue in Cairo's historic but dilapidated Saida Seinab district feel for the victims' families. The imam of the local mosque has drummed up a few volunteers to supply waiting relatives with masks against the stench as well as cool water. While young men help to carry the coffins, others stop by to express their sympathy.

The suffering of the victims' families have even caused some to change their political views. "On 30 June, I – along with many other Egyptians – stood on Tahrir Square calling for the military's return," says one elderly man, his face thoughtful. "Now, I feel ashamed."

In Doha, Arabs from Morocco, Tunisia, Egypt and Algeria are gathering to celebrate the first ever FIFA World Cup to be held on Arab soil. The criticism from Europe? Over the top, ... END_OF_DOCUMENT_TOKEN_TO_BE_REPLACED

November 2022 sees the Arab world firmly in the spotlight with the COP27 in Egypt and the FIFA World Cup in Qatar. Public trust in MENA governments is weak, thanks to their ... END_OF_DOCUMENT_TOKEN_TO_BE_REPLACED

Palme d’Or winner "Boy from Heaven" is a classic crossover film in which cultural elements are mixed together in haphazard and random fashion. Shady Lewis Botros bemoans the ... END_OF_DOCUMENT_TOKEN_TO_BE_REPLACED

COP27 in Sharm el-Sheikh is turning into a PR disaster for Egypt’s military regime. Instead of praise for the host, the news is full of solidarity for imprisoned activist Alaa ... END_OF_DOCUMENT_TOKEN_TO_BE_REPLACED

END_OF_DOCUMENT_TOKEN_TO_BE_REPLACED
Social media
and networks
Subscribe to our
newsletter