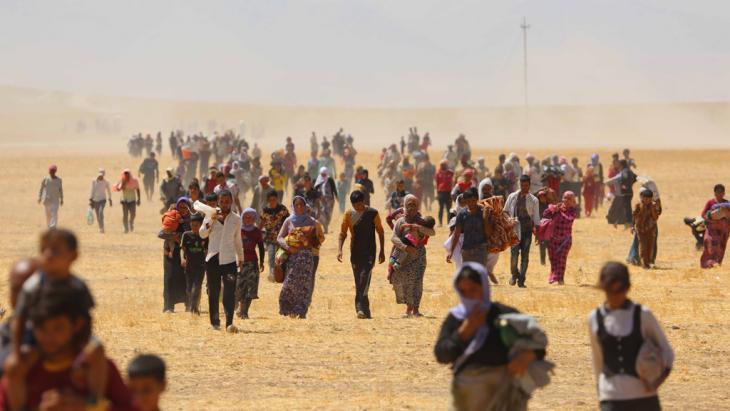 Persecution of the Yazidis in Iraq
Don't abandon us!

In Iraq, not only are the Yazidi people being persecuted by IS, their sacred sites are also being destroyed by the jihadists. The Yazidis are now responding by forming troops of fighters to protect these sites. By Joseph Croitoru

"We are 350 families in the mountains and without food and water. The number of those dying of thirst is rising. Please help us. I am writing this near the peak of the Sinjar mountains. My battery has almost run out."

Desperate pleas like this reach Hayri Demir in Hanover on a daily basis. It is there that the young journalist runs the Yazidi news portal "Ezidi Press". The site is deeply concerned about the fate of the Yazidis in Sinjar and the surrounding region in northern Iraq. It also seeks to present the most accurate account possible of the dramatic situation.

It is understandable that members of the community of exiled Yazidis in Germany are quick to talk of "genocide," given murders perpetrated against fellow believers and the kidnapping of hundreds of women and girls by IS ("Islamic State") jihadists.

The "Chronology of the Attacks on Yazidis" put together in recent days by "Ezidi Press" tends to give the impression that armed IS groups are using targeted executions to provoke the Yazidis into fleeing en masse – a strategy that has worked. The term "ethnic cleansing" seems more applicable here, which is the descriptor used by the Hanover-based Yazidi activist and political advisor Mirza Dinayi, who is currently in the Kurdish city of Erbil. 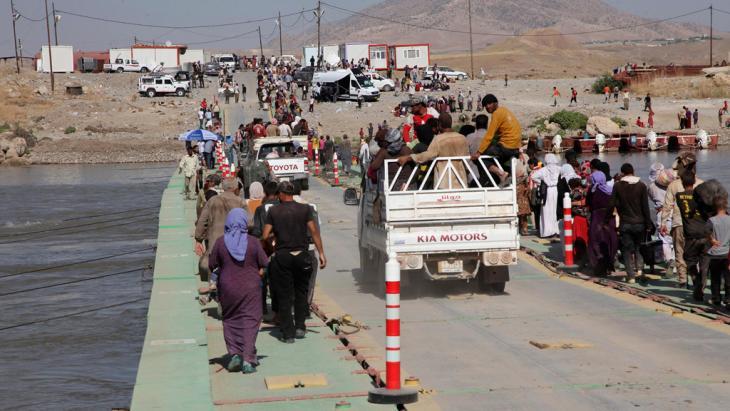 Yazidis who fled into Syria following violence in Sinjar, re-enter Iraq: according to the UN, about 200,000 people were on the move in Iraq last week, fleeing the advancing troops of the IS ("Islamic State"). Most of them are Yazidis and Christians. In the areas controlled by IS, the jihadists have been calling on non-Muslims to covert to Islam or die

There's more at stake than the lives of tens of thousands of Yazidis who have sought refuge in the Sinjar Mountains. They still face mortal danger despite the launch of aid campaigns. The religious minority's entire cultural home in the region near Sinjar is also under serious threat too: numerous religious sites have already fallen to the destructive fury of IS fighters.

Hayri Demir reports that smaller shrines both north and south of the Sinjar Mountain Range have been destroyed in a dozen villages, including in Siba Sheikh Khidr and Tel Azer as well as Zorava and Hirdan. The shock troops of the IS caliphate also launched an attack in the Shrine of Sherfedin in Sinjar, the most important religious site in the region. Inaccurate reports quickly spread in Arabic media that an explosion had struck the shrine there, which consists of two structures featuring the lamellar pointed towers typical of Yazidis' sacred architecture.

As a matter of fact, Yazidi self-defense forces, together with aid from Kurdish Peshmerga units, were able to stop the attack by IS militias. Specifically for the sake of protecting this central holy site, the local Yazidi community established the Sinjar Resistance Force several days ago, which has since reportedly recruited several thousand members, who are ready to fight.

Arguably the most holy site for Yazidis is the tomb of the mystic Sheikh Adi Ibn Musafir al-Umawi (1073–1163), a Sufi religious figure revered as holy among Yazidis, which is located in the Lalish Valley in Iraq's autonomous Kurdish region. At present, it doesn't seem to be directly under threat. It is followed in significance as a pilgrimage site by the Sherfedin Shrine in Sinjar. In Yazidi tradition, the shrine is particularly bound up with resistance and acts of heroism – points of reference for the troop currently seeking to protect it. 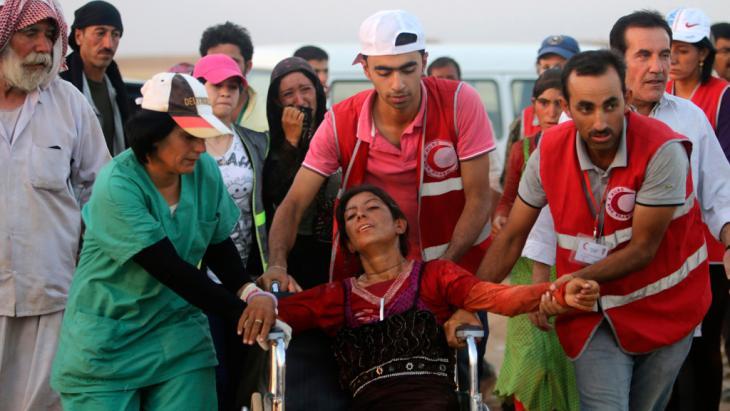 Members of the Kurdish Red Crescent help a Yazidi woman fleeing across the border into Syria. In the course of its campaign, IS militias have already killed over 500 Yazidis

Sherfedin was the son of Sheikh Hassan Ibn Adi, a distant relative and successor to the founder of the Yazidi faith, Sheikh Adi. During his lifetime in the mid-thirteenth century, the Yazidis faced persecution at the hands of the Sunni ruler of Mosul, Badr al-Din Lulu.

When a group of Yazidi fighters stood up to his troops in Lalish, most of them were killed, and Sheikh Hassan was captured and publicly hanged. His son Sherfedin managed to flee to Sinjar, where he reorganised a resistance force. Before dying in battle in 1257, he was still able to send a message to his fellow believers, which has been passed on as the Sherfedin Hymn and remains well-known among Yazidis today. In the Sinjar region in particular, Sherfedin is identified with the Mahdi, a Messiah figure in Islamic tradition, who is expected to emerge as a redeemer before the world's end.

In light of the ongoing struggle of defense in the city of Sinjar, this hymn takes on explosive import because it describes an eschatological battle in which the Yazidis stand up against attacks from "Sharia adherents" – the IS' murderous bands are well-known for considering themselves the true interpreters of Islamic religious law. In the Sherfedin Hymn, Yazidi fighters rally around their commander Sultan Ezi. At one point, the lyrics go: "Sultan Ezi, give us courage! / We will gather around you / Don't abandon us and leave us in the hands of Sharia."

Home
Print
Newsletter
More on this topic
The Yezidi in Iraq: Woe to those who don't believe in hellfireInterview with war photographer Christoph Bangert: The naked brutality of warISIS leader in Iraq: The new face of jihad?ISIS propaganda and use of social networks: The online jihad
Related Topics
Human rights, 'Islamic State' | IS, Jihadism | Jihadists, Minorities in the Muslim world, Muslim minorities, Sharia, Yazidi
All Topics

Algeria‘s regime is again cracking down on anti-fracking activists and the unemployed in the country‘s south. Yet EU countries remain keen to scale up their energy cooperation ... END_OF_DOCUMENT_TOKEN_TO_BE_REPLACED

Bachtyar Ali sends the hero of his latest novel – "Mein Onkel den der Wind mitnahm" – literally flying. Jamshid is so thin after his years as a political prisoner that a gust of ... END_OF_DOCUMENT_TOKEN_TO_BE_REPLACED

For a century, the Kurds and other minorities in Turkey have been subject to state repression. With his dissertation "The Kurdish Question in Turkey", political analyst Ismail ... END_OF_DOCUMENT_TOKEN_TO_BE_REPLACED

Anti-Semitic motifs have no place at Germany’s documenta art show or anywhere else in the world, stresses Meron Mendel, director of the Anne Frank Educational Centre in Frankfurt ... END_OF_DOCUMENT_TOKEN_TO_BE_REPLACED

A new exhibition, "Syria – Against Forgetting", at Cologne’s Rautenstrauch-Joest-Museum focuses on Syria's artistic and cultural heritage and pays tribute to the country before ... END_OF_DOCUMENT_TOKEN_TO_BE_REPLACED

Madrid's about-face on the Western Sahara conflict has enraged Algeria. Trade relations have been frozen unilaterally and a cut in gas supplies to Europe could be in the pipeline ... END_OF_DOCUMENT_TOKEN_TO_BE_REPLACED
Author:
Joseph Croitoru
Date:
Mail:
Send via mail

END_OF_DOCUMENT_TOKEN_TO_BE_REPLACED
Social media
and networks
Subscribe to our
newsletter